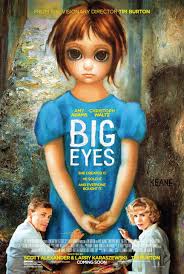 Amy Adams is terrific as usual in this curiously flat film that tells the true and outlandish story of Margaret Keane, who in the 1960s painted those ubiquitous images of sad children with large eyes that adorned everything from posters to coffee mugs.  Turns out her charlatan husband, Walter (Christoph Waltz), took credit for her work as he relentlessly promoted the images while for all intents and purposes imprisoning her in their home, forcing her to produce ever-more paintings.  Director Tim Burton’s film (written by Scott Alexander and Larry Karaszewski) doesn’t quite do justice to what seems the reality of the story, or that of any abused woman.  That is, we don’t hear much from Margaret’s perspective, and there’s only so much Adams can do to register her hurt, then dismay, then anger, and finally, her righteous retribution for suffering years of Walter’s escalating emotional, verbal, and finally physical abuse.

Walter forbids Margaret to tell even her daughter, Jane (played as a younger girl by Delaney Raye and as a young woman by Madeleine Arthur), the truth of the paintings’ authorship.  Margaret hides in her locked studio most of the time, fracturing what had been her close relationship with her daughter.  Adams dials her performance way down, as she mostly interacts with her canvases and the increasingly mournful images she produces, or with her dog, the only sentient being in whom she can confide.  In other words, the script doesn’t give Adams much to do, although the actor’s intelligence and empathy is clear in every frame.  Christoph Waltz, on the other hand, chews the scenery, first with Walter’s excessive charisma and later with his mad rage over Margaret’s desire to tell the truth.

The film seesaws between drama and campy comedy, as Burton can’t quite get the tone right.  His Edward Scissorhands (1990) took a melancholy outsider’s view of the constraints of suburbia, and Ed Wood (1994) celebrated a genius oddball.  But Burton doesn’t quite know what to make of the suburban oddball Margaret Keane.  Her art is facile but somehow compelling in its weird expressiveness, but her paintings can’t be camped up in the same way Burton did Woods’ wacky films.  Some critics see Burton moving into a more naturalist emotional terrain with Big Eyes; I only found it bumpy.

The film’s funniest scenes include Terence Stamp as the effete art critic John Canaday, who vilifies the Keane work as kitsch.  He insists organizers take down a painting Margaret created at Walter’s behest for a very visible display at the New York World’s Fair in 1964.  When reporters finally reveal the hoax about the paintings’ provenance, the critic practically chokes when he reads that the work is Margaret’s.  You can’t help but wonder if he would have spent his venomous words on Keane at all if he knew she was a woman.

Through scenes like these, Burton’s film notes the pervasive sexism of the 1950s and early 60s.  Walter insists that no one will take “lady art” seriously and Margaret believes him.  She finds no evidence to the contrary (although she does mention Georgia O’Keefe as a counter-example).  And she has no options outside of her nasty marriage, even though Big Eyes begins with Margaret leaving her first husband with a young Jane in tow.  She moves to San Francisco to restart her life, where her one friend, DeeAnn (Krysten Ritter), a single woman peripheral to the art scene, seems able to make her way alone.

This background makes Margaret’s quick capitulation to Walter’s manipulations perplexing.  In an early scene, Margaret reads a letter from her ex-husband’s lawyer threatening to sue for custody of their daughter.  Walter chivalrously offers to marry her so that Margaret can keep Jane with her.  While she’s relieved at the arrangement, she can’t see through Walter’s facade to fathom his opportunistic calculations.  In fact, Jane understands quickly and clearly the havoc Walter wreaks in their home, while it takes Margaret much longer to catch up.

Big Eyes  is most interesting for how it charts Walter’s genius for creating art in the age of mechanical reproduction.  He perceives early on that the posters announcing Margaret’s art gallery show, with their copied images, are moving more quickly than the much more expensive paintings.  Because he’s only in it for the money, he eagerly reproduces Margaret’s work on posters, postcards, and all sorts of cheap paraphernalia that builds what he calls their “empire.” Andy Warhol even makes a quick appearance to applaud the reproductions, as everyone in Big Eyes but Margaret obviously cares more about the replicas than the originals.

Ruben (Jason Schwartzman), the highbrow art dealer whose gallery stands across the street from the much more popular Keane store, sneers at Walter’s business sense and his willingness to make a popular movement of his wife’s images.  But why not, Burton encourages the audience to ask? Why not make accessible and proliferate the very art people want to consume, even if it doesn’t meet standards established by elitist blue-blooded white men?

The film’s more interesting discussion, then, addresses the question of what really constitutes “authentic” art.  But its last third hinges instead on issues about authorship and inspiration.  Walter parades his proud cluelessness about the origins of art, since he’s never really created any.  To provide his script for interviews in which he performs as the artiste, Margaret has to explain to him how her work expresses herself and comes from her heart.  Like her paintings, Margaret’s is a rather puerile view of what art is, but compared to Walter’s philistinism, the film insists it will do.  Walter instead concocts a story about seeing orphaned children in Germany after the war, who became the sad inspiration for “his” images and play on the sordid sympathies of his sycophantic audience.

Margaret finally takes Walter to court for slander in a legal move that will allow her to retrieve ownership of her work.  The climactic courtroom scene is both funny and painful.  Walter serves as his own defense, blustering about the room, working his audience, and cross-examining himself until the exasperated judge forces him to stop.  When the judge decides the only way to get at the truth is to have Walter and Margaret paint for an hour in the courtroom, Walter stares at the blank canvas with chagrin.  He finally concocts a story about hurting his shoulder in a way that makes it impossible for him to lift a brush.  Margaret obviously triumphs, although apparently, the real, delusional Walter protested until his death that he had created the paintings.

I wish Big Eyes were the better, more interesting movie Keane’s story deserves, one in which she’s an agent and not just a victim.  Burton resorts here instead to familiar battered woman clichés:  When Margaret and Jane escape into her locked studio for protection from one of Walter’s rages, he shoves lit matches through the room’s keyhole that set a spilled tin of turpentine on fire. He rages from drink; he seduces other women right in front of Margaret; he doesn’t tell her he has a child from another marriage; he isolates her from her friends and from Jane; he works her to the point of exhaustion and doesn’t let her out in public alone.

While all of this is no doubt true and certainly appalling, Burton might have found other ways to tell the story that didn’t only victimize and finally silence Margaret just as Walter did.  Burton can be a fabulous stylist but in Big Eyes, he resorts to a most conventional narrative, instead of creating a grander, more formally or structurally outlandishly film like his others.  Following the recipe of Scissorhands or Ed Wood which might have captured the stifling weirdness of the misogynist, high art zeitgeist in which Margaret Keane’s sad and outrageous fortunes played out.