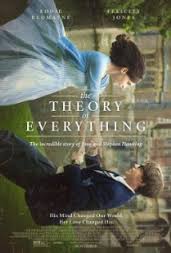 Here are two films that don’t pass the Bechdel Test:  The Theory of Everything and The Imitation Game.  In Theory, Felicity Jones plays Stephen Hawking’s stalwart wife, Jane, who stands by him as his helpmate and intellectual equal while his body deteriorates from a slow-moving form of Lou Gehrig’s disease (ALS).  Jones is terrific as a woman who endures her frustration with a life circumscribed by her husband’s physical limitations, who put off her own plans for a PhD in medieval Iberian studies to tend to Stephen and enable his continued intellectual and academic success.

Eddie Redmayne’ Oscar-bait performance as Hawking offers a feat of physical, as well as emotional, virtuosity, playing a role that requires him to sit with his body twisted into the man’s S-shape, and eventually, when he could no longer speak, to communicate via a rudimentary computer that captured his thoughts and broadcast his speech.  Redmayne conveys Hawking’s devilish humor and twinkling commentary by raising his eyebrows, curling the edges of Hawking’s misshapen mouth, and signaling through his eyes the man’s determination to continue living, thinking, and feeling, even as his body lost muscle mass and mobility.

Redmayne will no doubt be nominated for an Academy Award and has a good chance of winning, since the role falls squarely in the tradition of Daniel Day Lewis in My Left Foot (1989), Dustin Hoffman in Rain Man (1988), Sean Penn in I am Sam (2001), and even Jon Voigt in Midnight Cowboy (1969), all playing men with physical or psychological challenges whose performances critics or peers rewarded.  Women get noticed for gaining weight (for only one example, see Charlize Theron in Monster, 2003), but men get their laurels by imitating compromised versions of masculinity.  They “dare” to go there, giving up the privilege of handsome, strong masculine bodies to play those the culture feminizes because of their differences.

Hawking falls ill early in the film, just as he’s establishing his brilliance.  His colleagues and mentors are generous with his physical deterioration because they so respect his mind.  He retains his sense of humor and his intellect even as he becomes increasingly dependent on others.  In one scene, his colleague cheerfully carries him up a large, wide flight of stairs on the campus green.  As Hawking lays in his arms, the man defuses any implication of queerness by asking Hawking if he can still have sex.  Hawking confirms that his penis works on a “different system,” and, in fact, he and Jane produce three children after the onset of his disease.

As in many films about disability, in The Theory of Everything, how people relate to Hawking determines who’s “good” and who’s “bad,” making his disability less about him than a litmus test for the moral character of others.  Jonathan (Charlie Cox), the church choir director who becomes a family friend, caretaker and, eventually, Jane’s romantic interest, is a good man because he tries to help feed Stephen, even when he doesn’t know him well.  Elaine (Maxine Peake), a caretaker who becomes Hawking’s second wife, insinuates herself into his emotional world and is considered “bad” when she interrupts his relationship with Jane and indulges him with pornographic magazines.

Also represented is the wish for “normalcy,” in an admittedly poignant moment when Hawking, alone on an auditorium stage in his wheelchair listening as his computer gives a pre-loaded speech to a large audience, sees a young woman in the first row drop a pen.  The camera follows Hawking/Redmayne’s gaze to the ground, then backs up for a fantasy moment in which the actor slowly straightens his body, lifts himself from the wheelchair, walks down the short flight of steps to the woman’s seat, and retrieves her pen for her.  The moment ends with Hawking still, of course, in his chair, watching and yearning; we’ve been given insight into his sense of himself as able-bodied and his desire to be free of his physical challenges.  The moment is moving but also rather smarmy, as it encourages spectators toward pity more than respect.

Hawking’s story is inspiring, and The Theory of Everything, despite my quarrels here, is emotional and absorbing.  But what is it about all the “great men” movies that come out this time of year, with their rousing scores and distinguished performances, their bid for empathy and their patina of history and biography, all pitched with the (self-) seriousness of projects bidding for Oscars?  Where are the great women’s stories, I wonder?  Wild is significant in this batch, not because Cheryl Strayed is a “great woman,” but because it’s one of the few films I’ve seen this holiday season that even passes the Bechdel Test, which simply requires a film to include more than two female characters who talk to one another about something other than a man.  How criminal that so few of the Hollywood releases at the end of 2014 came close to passing this easy test.

The Imitation Game, another “great man” movie that’s worth seeing, if only for its fascinating history, sports a feisty performance by Kiera Knightley as the brilliant Joan Clarke, but she’s the only woman in the film (besides Clarke’s mother, who barely speaks).  The Imitation Game exemplifies what Susan Douglas calls “enlightened sexism”; the filmmakers know there’s only one woman in its story, but seem to blame its gender imbalance on truth of history, in which very few women were involved in cryptography during World War II (I guess; I have to take the film’s word for it).  But that doesn’t explain why Knightley’s character needs to be so solitary and isolated in a film released in 2014.

The Imitation Game tells the story of Alan Turing, a brilliant, difficult man who invented the first computer, which he used to break the Germans’ Enigma code in World War Two.  He died in his early 40s, whether by suicide or murder has never been resolved.  His centenary was celebrated in 2012.  That Turing was “a homosexual,” as he tells Joan regretfully in The Imitation Game, explaining why he can’t, after all, marry her, also seems to authorize the film’s omission of other women characters.  And according to A.O. Scott’s review in the Times, the film also erases Turing’s desire by eliding what was apparently his very active sexual life, before he was arrested for “gross indecency.”

Benedict Cumberbatch, as Turing (more Oscar bait, as a man probably on the Asperger’s spectrum), Knightley, as Joan, and Matthew Goode, as a colleague who begins as a competitor and ends as a reluctant admirer, offer engaging performances and Graham Moore’s screenplay gives them sharp, evocative dialogue.

But all this enlightened sexism and liberal tolerance gets tiresome.

2 thoughts on “Theory of Everything and The Imitation Game”