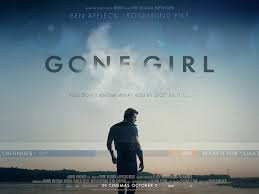 Oy vey, Gone Girl.  I read Gillian Flynn’s 2012 novel (and very much enjoyed the smart criticism she once wrote for Entertainment Weekly).  The book was good—a can’t-put-it-down, twisty-turny psychological thriller with a rather Grand Guignol finale that made very little sense.  Written in alternating voices—first Nick, the husband, then Amy, the wife—that provided opposing interpretations of the same events, the novel was a smart, he said/she said story about the souring of a very contemporary white upper-middle class marriage, one marred by the 2008 recession and the emotional hauntings and manipulations of the couple’s domestic past.

Then director David Fincher (he of The Social Network and Fight Club and The Girl with the Dragon Tattoo fame) gets ahold of the story.  Although Flynn adapted her novel for the screen (and made some changes in the still remarkably unbelievable ending), Fincher shifts the point of view and the film’s sympathy entirely to Nick (Ben Affleck, perfectly cast), and makes of Amy (Rosamund Pike) a stunningly cold psychopath.

Once again, in Fincher’s oeuvre (and let’s be frank, in so much of contemporary Hollywood cinema), the sexism is noxious and deep, while on the surface, the film looks progressive.  It also looks beautiful—Fincher is a stylist who conveys a lot of meaning by where he places the camera and how he uses his swooping establishing shots.

It’s clear from Gone Girl’s opening moments that Nick and Amy live bankrupt lives.  Nick lurks outside as dawn breaks, standing on the curb by the family garbage bin.  The street is empty, suburban in that anonymous, soulless way, and his presence seems to signal both his isolation and his strange heroism, the man’s man taking out the garbage (always prompted by the nagging wife, in the American popular imagination, even though Nick and Amy have promised never to become “that couple”), and surveying his terrain.

After Nick slips away that morning, we see him later bantering at a bar with Margo (Carrie Coon), his smart-mouthed twin, who doesn’t seem to like his wife, Amy, very much.  Margo and Nick co-own the bar (which is called, in an attempt to be chic and pithy and self-ironic at once, The Bar).  When Nick gets a call from a next door neighbor, who tells him the family cat is wandering outside, he returns home to find his front door ajar, his living room overturned, his coffee table shattered, and his wife gone.  Where has Amy gone?  Who took her?  Did Nick kill her?

The house, just in case we don’t already get Fincher’s point, is set-decorated like a model apartment, the ones that someone else has furnished and accessorized.  Nothing personal (but one wedding photo significantly set on the living room mantle) gilds the large, free-flowing space.  It’s a house that a striving young couple might dream of, with an open kitchen, and interior French doors that set off bedrooms from large two-sink bathrooms.  It’s got a winding staircase and a foyer, and pretty white balustrades that later signal potential violence.  But it’s clear at a glance that no love softens the house’s edges or warms its trendy taupe paint.

I kept hoping, because of these signs, that Fincher’s Gone Girl would turn out to be a smart new critique of the emptiness of wanting what everyone else has.  But no, it turns out that Amy is quite wealthy, her parents the co-authors of a children’s book series that poached from her life to create a better, more accomplished doppelganger called “Amazing Amy.”  The Missouri suburban home to which Nick and Amy repair when his mother is dying of cancer and the recession ends their writing and reporting jobs in New York is a step down for this couple.  Although Nick grew up in this town, and now teaches creative writing at a local college, he and especially Amy seem to find the whole scene beneath contempt.

Fincher and Flynn’s caricature of a female neighbor, who becomes important to the plot’s oppositions, is particularly mean-spirited.  A mother of triplets, whose husband is never seen, Noelle (Casey Wilson) is dumb and righteous and always has a baby at her breast.  She believes Nick killed Amy; she hounds the police investigating the case and speaks out at public vigils to reveal the dark secrets of the marriage to which Amy supposedly made her privy.  But the character sets up the toxic binary through which Fincher pathologizes Amy.  Noelle is a mother, who follows the sanctioned life-path that convention sets for many white, upper-middle class heterosexual women.  Amy, on the other hand, manipulates pregnancy to her own ends; it’s never clear whether or not she wants children or just the emotional power over Nick that having a child would confer.

And that, finally, is what the film is about:  the take-down of a smart, beautiful woman who refuses to fulfill her proper wifely role.  Amy’s ambiguity and ambivalence about her reproductive capacities is only one of many strikes Fincher and Flynn place against her in the film’s inexorable misogynist slide toward her damnation.  Pike, as Amy, is beautiful and blonde, with porcelain skin, piercing dark eyes, and facial planes that make her angular and interesting to watch.  But her face is also strangely immobile—all her emotions come from her words, while her face and her body are always still (as FS2 points out, even her voice is very flat).  This, too, is how the film damns her.  Her lack of emotion makes her suspect, and the fact that she’s smart (the female detective, Rhonda Boney (Kim Dickens), investigating her disappearance comments on the prominently framed diplomas from Harvard and other Ivy League schools in her study) also works against Amy.  Smart, beautiful women who won’t reproduce—in Fincher’s cosmology—need to be punished.

Some commentators see Gone Girl as a critique of media exploitation, since so much of the film describes how CNN- and Fox News-style television “reporters” profit from American culture’s prurience.  The film’s two unctuous, sensationalist talk-show hosts are played by an elegant and remote Sela Ward as a fake-empathetic shark who scores an important live interview with Nick, and by Missi Pyle as a Fox News-style harridan who hammers away on-air at Nick’s presumed guilt.  That these grasping, insincere, and self-serving TV personalities are women lines up more support for the film’s empathy for Nick.

I’ve also heard people suggest that Fincher’s film could be seen to promote rape culture, since as Amy’s veracity becomes a key plot point, we find out she once ruined someone’s life by falsely accusing him of raping her.  Later, we see Amy penetrating herself with the mouth of a wine bottle to simulate rape wounds, which suggests that women “cry rape” for their own nefarious purposes.  That Amy does all this with an ever more frozen demeanor and with an increasingly Stepford Wives-style lack of affect is supposed to be chilling but actually becomes funny.  For a feminist spectator, Amy’s actions horrify mostly because Fincher and Flynn suggest that this super-smart woman, with all her social advantages, has to resort to manipulating her beauty and her body to get what she wants.

As for the other women characters in the film, oy vey, again.  The film doesn’t even pass the Bechdel test.  Amy, Margo, and a subsidiary but important very young coed character, Andie (Emily Ratajkowski), don’t even actually talk to one another.  Coon plays Margo with intelligence and heart and, at first, wry humor.  In her first scene, she wears a tee-shirt on which a silhouetted squirrel warns, “Protect your nuts,” which seems a cautionary admonition for male viewers of Gone Girl.  But Margo’s only objective is to protect and save Nick.  Det. Boney is smart and can see through many of Amy’s manipulations, but ironically, she’s discredited because of her gender.  Andie, the very young coed, is all nubile body, her stupidity serving to represent the “anti-Amy” in a way that damns Amy again.

Gone Girl is one of those movies a feminist spectator can only leave feeling dirty.  The book gave Amy’s point of view weight, and refused to villainize her (despite controversies even then about whether the novel was misogynist).  The film takes it for granted that Nick is the hero, and Affleck’s hulking muscles and brooding good looks imply his character’s righteous John Wayne origins.  That Nick goes on television to protest that he’s not a good person, that he’s made mistakes, that he’s human, too, seals him as the film’s core.  Tanner Bolt, his lawyer (played wonderfully by Tyler Perry, the only actor and character who seems to see how ludicrous these proceedings are) suggests that he looks smug and remote, that his face doesn’t show enough emotion.  To prepare him for his television interview, Bolt throws Gummy Bears at Nick’s face every time he doesn’t look appropriately earnest or chagrined.

Gone Girl suggests that we’re all playing for the cameras, that stories and relationships can be performed for maximum effect, and that the truth is finally beside the point.  But Nick’s smug affect can be fixed and shifted to his favor.  Amy’s vilifies her.  She’s too smart and pretty for her own good.  Her confidantes are ridiculed; her confessions to the audience through journal-writing voice-overs are unreliable; and her self-abuse makes her psychotic.  As FS2 suggests, Amy is cut from the same cloth as Alex, from Fatal Attraction (1987), and too many other smart, sexy, demonized women like them.

I’m all for a good female villain, a rare breed for which Flynn argues in her own feminist defense.  But the way Amy is villainous here hews too closely to stereotypes circulated ad nauseum about smart women–that they’re self-serving and cold, ball-busters who refuse to settle down and have babies.  The blogsphere is having a good time debating the merits of the film’s representation of women (see Lauren Duca’s HuffPo round-up of much of this writing).  But I just can’t buy Gone Girl as feminist.  The truth of Amy and Nick’s relationship is never resolved, so the story refuses to tell us who the real villain is.  But the film’s cinematography, direction, and characterizations drain the audience’s empathy from Amy as the clock ticks on (the film is 149 minutes long). Amy is just another straight white female psychopathic character vilified and discarded on the trash heap of women in the Hollywood film history.