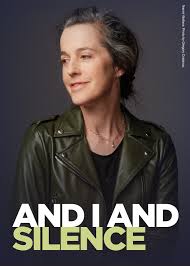 I’ve been reading, teaching, and seeing Naomi Wallace’s plays for more than 25 years.  One Flea Spare is her most often produced, but Trestle at Post Lick Creek, Slaughter City, and In the Heart of America (among many more) are all beautifully, elliptically rendered stories.  The Liquid Plain, which premiered last year at the Oregon Shakespeare Festival in a production directed by Baltimore’s Center Stage artistic director Kwame Kwei-Armah, will open in New York at Signature Theatre this spring.

Wallace’s work just continues to deepen.  And I and Silence, which just closed at Signature, is a non-linear, episodic story, a sober drama about two young women, one African American and one white, who meet in prison and continue their lives together on their release in the 1950s.  The play moves back and forth in time as Dee and Jamie languish in prison as 17-year-olds for crimes of necessity, then try to manage their lives as adults nine years later on the outside.  Wallace sets the play in the ’50s to give it a gloss of distance and to heighten the stakes in making visible the oppressive social structures that inhibited young women and people of color, especially, in pre-Civil Rights, pre-women’s liberation America.

Dee and Jamie are women before their time, full of desire and ambition and dreams that eventually are thwarted at every turn.  In prison, Dee approaches Jamie, determined to be her friend despite the African American girl’s wary suspicion.  One of the pleasures of the play is watching Jamie thaw and the two girls’ relationship warm and deepen.  To pass the time in prison, they dream about what they’ll do after, enacting ritual performances as the “servants” they decide they’ll become.  Jamie’s mother worked as a domestic; she schools Dee in how to hold her dust rag, and how to look graceful and pleasant and happy as she’s doing back-breaking cleaning work.  Wallace captures the performative posture of the subaltern, as Jamie teaches Dee the survival skills required to work under the policing gaze of the dominant class.

But the flash-ahead scenes demonstrate how the two young women crack under the strain of such power arrangements.  Dee, who even in prison was willful and resistant, can’t hold her jobs because she won’t bend to her employers’ will.  And Jamie, too, finds the sexual compromises required to stay in her employer’s house impossible.  As the short play progresses, Jamie and Dee become desperate; their options run out as their food dwindles.

Wallace’s plays always focus on the intersections of class, race, and gender, and an underclass whose futures are formed by ideology they can’t quite see but can feel palpably, materially, in their daily lives.  In his New York Times review, Charles Isherwood found the play baggy, lacking tension and drama, and compared the ending somewhat dismissively to Thelma and Louise.  But in fact, like Susan Glaspell and so many women playwrights who capture the complexity of the quotidian, Wallace reads under the surface and sees the pain and power of daily decisions that compose a life.  And women’s lives, so fragile at that particular moment in the 50s, are full of tragedy and comedy and warmth and sorrow that Wallace captures elegantly.

Director Caitlin McLeod (who directed a production of And I and Silence at London’s Finborough Theatre) makes good use of the long, narrow playing space, across which two banks of spectators face each other.  The set feels like a catwalk, hanging between worlds; it’s surrounded by metal stairs and bridges that weave and wonder to nowhere, like an Escher drawing.  The actors change the direction of the single, Army-style cot to signal moving from the prison cell to the room Dee and Jamie share when they get out.  Otherwise, it’s clear very little changes in their lives, as their entrapment continues. Likewise, McLeod captures the physicality of Wallace’s plays, in which the borders of bodies are often porous, or turned inside out, or show their interiors to mark the wound of ideology.

The four women who play Dee and Jamie convey the anger and affection, the hope and despair, the objectification and desire through which the characters cycle.  Samantha Soule and Rachel Nicks are especially lovely as the older pair, as they follow the thread of pride and possibility that winds around both women, linking their destinies together.  With a look and a gesture, Soule and Nicks convey the ample subtext in Wallace’s dialogue.  They carry their big tin wash bins with strength and purpose, and wash out the only dresses they own with determined pride.  Watching them work, hearing their stories, knowing their desires, is wrenching, moving, and illuminating.

Watch for Wallace’s The Liquid Plain at Signature this spring.  She’s one of our best playwrights.