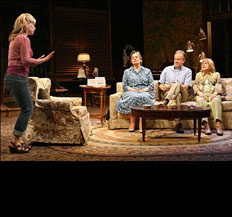 As religion and fundamentalism come under closer scrutiny, one can only hope, in the aftermath of the Bush administration’s refusal to separate church and state, plays like Savannah Disputation (at Playwrights Horizons, 3/8/09) are a welcome addition to the debate. Evan Smith’s play is ultimately a confection, but its wry barbs and ironic parries with questions of faith and belief sure taste good going down. With sharp comic performances by all four actors and direction by Walter Bobbie that keeps the action going and the dialogue moving, the play scores some minor but necessary points for secular humanism.

Marylouise Burke plays her stock dotty grandmotherly character, this time in the person of Margaret, an elderly, never-married woman who lives with her sister, Mary, played with perpetually rolling eyes by Dana Ivey. When Melissa, an evangelical missionary (Kellie Overbey), arrives at their door, Margaret can’t resist engaging the challenges to her Catholicism that the woman’s proselytizing provokes. Although the more sober-minded Mary dismisses the young woman without a second thought, Margaret arranges for her to return for an evening’s discussion about matters of faith.

Against Mary’s wishes, Melissa descends on their home with her show-and-tell box of trivial pursuit questions about Jesus and his teachings. Frustrated by her mindless but strangely persuasive adherence to what Mary considers heresy, the ever rational but clearly competitive sister invites Melissa back, clandestinely arranging for Father Murphy (the terrific Reed Birney, late of his virtuosic turn in Blasted at Soho Rep) to join them as ministerial ballast in their debate.

The third scene of this zingy three-part 90-minute play stages the confrontation between the surprised, hesitant clergyman and the eager young evangelist, both of whom, it seems, have turned to religion to quiet their own personal demons rather than because they’re inherently believers. Father Murphy sets Melissa straight while making it clear that he admires her fervent desire to commit her life to something that matters, while at the same time chastising Mary for using him as a pawn in her contest. He suggests that Margaret address her own gullibility (and grow up) and exits the evening ruefully, inviting himself back next week for his regular dinner with the sisters.

The play is rather pat, and Father Murphy’s service as the intellectual and emotional agent for the three women is irritating. Rather bland and milquetoast, he’s not the most compelling character. Savannah Disputation would be more interesting if it were Mary who prevailed on her own terms, instead of by maneuvering her priest into being her mouthpiece. Instead, she’s left at the play’s end standing by her answering machine, listening to the fourth message from her doctor’s office, urgently asking her to call in for her test results.

The specter of mortality that hovers over the character is too easy an excuse for her crisis of faith, and leaves the audience feeling manipulated. The comic dialogue offers more than a few entertaining moments, and Smith’s writing is knowing and observant about the foibles of religious devotion. But to write off Mary’s quandary as an effect of a life-threatening illness needlessly moves the play to movie-of-the-week territory. The four excellent actors deserve better.