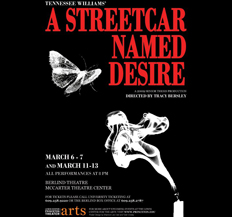 Usually, there’s something pathetic (and as a result irritating) about the women in Williams’s Streetcar Named Desire. Blanche is flighty and damaged, and Stella is so blindly in love with Stanley, she follows him around like a puppy waiting for him to throw her a bone. Usually, too, even though Blanche, well, blanches when she sees the squalor into which Stella has descended from their glory days on their family’s Belle Reve plantation, in other productions, the size of the stage makes the apartment in New Orleans’s French Quarter seem spacious and colorful.

The Princeton Program in Theatre and Dance’s terrific production of Streetcar (3/6/09) avoids both of these traps. To take the second trap first, thanks to set designer Jeffrey Van Velsor’s spot-on conception, a good half of the expansive Berlind Theatre stage at the McCarter Theatre is blocked off for use as the social environment surrounding the apartment. Characters exit to walk the streets or saunter off to the bowling alley or bar nearby. The other half is a small, square, raked platform, onto which is crammed Stella and Stanley’s tiny kitchen, with its filthy sink, ancient refrigerator, and few worn wooden cabinets, as well as its round table and four chairs, at which Stanley and his buddies spend most of their time in energetic, beer- and cigarette-infused games of low-stakes poker.

A sheer white curtain, hung on a precarious rod from a few thin rings, separates this very public space from Stella and Stanley’s bedroom, which is adorned with an over-sized bed, a narrow dresser, and a rickety night table. Behind this room is the bathroom, enclosed with an imaginary door that’s mimed by the actors. The audience watches voyeuristically as each of the characters enters what should be their only truly private space, where they use the toilet (quite realistically), shower, gaze at themselves in the mirror, change their clothes, and otherwise try to compose themselves for the on-going battle to survive that comprises their lives.

The bathroom “mirror” looks into the apartment’s kitchen, which allows the audience to see how the characters peer at themselves and also underlines the permeability between the rooms. Blanche’s Army-issue cot hovers downstage in the nether-region between the public and the private spaces, with her trunk of worldly possessions as her only furniture. Blanche’s tiny corner overflows with her finery and her fantasies, as she begins to spin her deluded narrative of her past, her present, and her future.

The cramped space quickly becomes a powder keg when Blanche arrives, as she robs Stella and Stanley of their little privacy. Without her presence, as Stanley complains to Stella, they’d “play our colored lights” and enjoy the intense and intimate pleasures of one another’s flesh, which draws them magnetically together. With Blanche and her fantasies sucking the air out of their home, Stanley becomes the violent animal Blanche assumes he is from the start, and Stella is frustrated and exhausted by trying to mediate between her sister and her husband.

The lack of room to breathe—and the New Orleans heat, which the actors here all manifest in the sweat they wear across their foreheads—makes it difficult for anyone to be civil or loving, and lets the audience feel viscerally how their circumstances trap the characters, forcing them to either lash out or to weave stories that allow them to escape their surroundings, if only in their dreams.

In this production, the female characters are far from pathetic, avoiding the second typical trap for Streetcar. In Shannon Lee Clair’s intelligent, nuanced portrayal, Blanche is a woman desperate to survive in much reduced circumstances. The character is often played as driven only by desire, and moralized against as a slut masquerading as a saint. But Clair’s delivery clarifies that Blanche has suffered the devastation of her homestead, burying her parents and their servants as they each slowly decline and decay, then finding herself left with nothing (“Death is expensive, Stella,” she says cuttingly).

Stanley finds out that Blanche has been working not just as a teacher but also as a prostitute in Laurel, Louisiana, and proceeds to deride her for her loose morals and easy virtues. But Clair’s Blanche is a woman who’ll do anything to survive. She’s tough and resilient, and though her choices aren’t always admirable, she’s kept food on her table and a roof over her head. Until, that is, she’s run out of Laurel by the sheriff for having sex with one of her 17-year-old male students.

That indiscretion reveals Blanche’s motivating guilt: She married, quite young, a beautiful boy who turned out to be gay. When she stumbled on him and an older man having sex, her disgust rushed the boy toward suicide, an action for which she still can’t forgive herself. Blanche is eternally caught in a nexus of guilt and desire from which she can’t be extricated. She flashes back to the scene of her betrayal, hearing again and again the carnival noises and the flashing lights that accompanied her harsh confrontation of her husband, and the gunshot that signaled his death.

Director Tracy Bersley illustrates the flashbacks with sound and lights, as the interior of Blanche’s psychic turmoil is manifested on stage. For a play that’s more often staged as strict realism, these flights into the sensual texture of Blanche’s fixations make for very compelling theatre. And while those moments could sink into melodrama, Clair’s Blanche tethers them to a keen sense of the woman’s unbearable remorse, her desire to make it right, and her inability to stop finding herself attracted to young boys who stand in for her dead lover.

Stella is hardly a simpering fool in the Princeton production. Played with intelligence and warmth by Veronica Siverd, Stella becomes a compassionate foil, caught in her corner of the triangle she comprises with Blanche and Stanley. She knows that Blanche is fading off into fantasy and she can see that Stanley is infuriated by her sister’s class snobbery and phony airs. But Siverd plays Stella’s love for them both as sincere and complicated.

Stella’s drawn to the physicality of her life with Stanley, but in Siverd’s hands, she’s equally thrilled by her life in the French Quarter, with the jazz playing through the apartment’s windows, the speakeasies to visit down the block, Stanley’s bowling games to watch, and the easy camaraderie of her upstairs neighbors, whose easy laughter and on-again off-again domestic squabbles echo her own. Stella has saved herself from Belle Reve’s ruin by making her own way in New Orleans, finding Stanley and reinventing her life. She knows that Blanche can’t drag her back, but she’s compelled by her own guilt at the burden Blanche has borne on her behalf.

All the actors present excellent performances. Tyler Crosby’s Stanley avoids the temptation to imitate the iconic Marlon Brando characterization, and instead finds Stanley’s scheming, workmanlike intelligence, if not his intellect. Crosby’s Stanley knows he’s not smart, but he compensates by being wily and manipulative, asserting his power through mental as well as physical intimidation. Shawn Fennell is gentlemanly and effete as Mitch, nicely playing the double standard of a man who wants his women to be virginal yet is willing to take his turn when he finds out they’re whores, as he does with Blanche.

Peter Walkingshaw and Stephen Strenio play very well the burdens of working class men trying to enjoy themselves over poker and a case of beer, and Arielle Sandor and Alexis Brown ably create the women who are Stella’s compassionate, empathetic but strong neighbors. James Mears, Cristina Luzarraga, Brad Baron, and Laura Hankin all take advantage of their supporting roles, turning in crisp images of the characters who people Streetcar’s world.

Bersley reprints in the program parts of a letter Williams wrote to Elia Kazan, who directed the Broadway production and the film version of Streetcar, which relates that he thinks the play is about the tragedy of judging one another falsely. In the spirit of our times, however, this production of Streetcar seems to me much more about the lengths to which people will go to survive, when their reduced circumstances give them so few options. Love becomes a pawn in a game that’s much more about economics than emotion, but still, the characters with the most compassion remain standing with their hearts intact at the end.
The Feminist Spectator