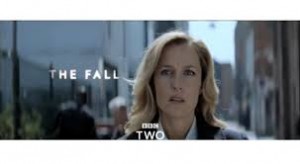 I recently finished binge-watching the second season of The Fall, a BBC series I highly recommend.  Gillian Anderson is riveting as Stella Gibson, a British detective superintendent brought in from England to help oversee the investigation of a serial murderer named Paul Spector in Belfast.  The show is essentially a procedural, a genre distinguished by how its examples address character, mood, and plot.  The Fall excels on each count.

Told from both Stella and Spector’s perspectives, the suspense comes not from wondering about the murderer’s identity but rather from how the series draws the tension tautly between the two, who are, of course, more alike than they are different, and by how it shows their characters without telling us much of anything about their back-stories.  Although Spector has a sick fascination with dark-haired professional women, whom he stalks and learns enough about that his crimes feel personal, he’s also a competent grief counselor (of all things) and a loving father (if a rather remote husband).  Stella, likewise, revels in her own sexual agency and her sharp intelligence; she’s very, very good at her job and doesn’t suffer fools.  Her precision and emotional acuteness, overridden by her public need to be controlled and authoritative, mirrors Spector’s.

Both the detective and the murderer are supremely intelligent and wily; both use their complex desires toward different but ultimately complementary ends.  The closer they get to their climatic meeting, the more their similarities clarify, which makes their showdown a marvel of acting, writing, and editing (by Steve Singleton).  As Spector insists Stella join him in the interview room when he’s finally captured, the camera frames their faces in close-up, almost like portraiture, prowling back and forth between them as though it’s the referee in their boxing match, waiting for one of them to break.  That neither ultimately gives up testifies to depth of the series producer Allan Cubitt’s writing and to the impeccable skill of the actors who play these characters.

Anderson offers a beautifully disciplined performance as a professional woman who doesn’t let her job get in the way of her desires, but who is burdened with emotional damage that’s never completely revealed.  The Fall parcels out information that explains bits and pieces of back story and motivation without satiating the spectator’s curiosity about these characters and their actions.  We come to learn a bit about the deprivations of Paul’s early life.  He was adopted, his mother committed suicide, he moved around foster care, and he was nearly abused by a pedophilic priest.  But nothing really explains his predilection for stalking and strangling professional young women, or his narcissistic god-complex.

Likewise, Gibson prefers one-night stands with men of her own choosing instead of emotional entanglements.  We learn that she has a troubled emotional past in which her unresolved relationship with her father figures heavily.  But The Fall knows that the details only matter for what they compel the characters to do in the present.  Human nature, Gibson suggests, can’t be explained.  It can only be controlled as much as possible through laws that enforce the ever-more tenuous social contract.

Both characters’ contradictions fascinate.  Gibson is on the side of morality and truth, but her one-night stands make her seem corrupt, though she feels no compunction for her actions.  Spector is a serial murderer and sexual predator, but he’s a sought-after grief counselor, an occupation that demonstrates his ability to empathize even as we see him show no mercy for his victims or remorse for their deaths.

Unpredictable human behavior preoccupies The Fall’s creators, and they grace Stella Gibson’s character with insight.  When her superior, Jim Burns (John Lynch)—a married man with whom she has some sexual history—appears one night in her hotel room distraught and drunk and tries to force Stella to have sex with him, she refuses but forgives him the next day, remarking that everyone has complicated desires and needs.  The trick, she says, is knowing how to manage them appropriately.  In fact, the very same evening, Stella has made a pass at Reed Smith, the local medical examiner, played with her typical sexually ambiguous magnetism by The Good Wife’s Archie Panjabi.  Their easy gender camaraderie, intensified by alcohol that evening, magnifies into sexual attraction.  But when Smith balks on her way to Stella’s hotel room, Stella understands how easy it is to be lead into beds that might not, after all, be appropriate.

Stella Gibson’s implicit, often unarticulated empathy is part of how she navigates a world filled with sexual, ethical, and gendered double standards.  When Burns insists that Spector is a monster, Stella retorts that in fact, Spector’s only human.  She can finally prevail over the villain because her more capacious view of human folly makes her better understand how her nemesis thinks and feels.  Although she appears “cold,” her empathy makes her passionate and keenly observant.

Jamie Dornan, the Belfast-born actor soon to rocket to fame as the lead in the film adaptation of 50 Shades of Grey, is terrific as the taciturn, mysterious, and brutal Paul Spector.  Part of the character’s power comes from Dornan’s ability to communicate his psychic complications.  When he’s counseling his clients, Spector is calm and empathetic, his manner physically remote but intellectually acute.  Often, Spector says little, but Dornan uses his deep, dark eyes and a twitch of his jaw to communicate the character’s interior machinations.  Spector is a ruined but powerful man; Dornan does justice to his skill and his intelligence and, on some level, his madness.  He makes Spector a fearsome presence by underlining the character’s unpredictability.  He always seems one step ahead of the police and everyone else.

But The Fall’s feminism comes from its nuanced characterization of the woman in charge and from how smartly it addresses Spector’s violence against women.  Her colleagues think Stella Gibson is icy and dispassionate, one of those imperious, piranha-like professional woman.  But the series dismantles that stereotype without undermining the character’s power or dignity.  Watching video of Rose Stagg (Valerie Kane), a young woman who’s been abducted by Spector, and feeling responsible for what will surely be Rose’s death, tears roll from Stella’s eyes, even as her face barely changes and she makes no sound.  Her eyes fill often, mostly in private, frequently when she’s gazing into a screen across which evidence of some new depravity plays, just out of her reach.  Stella’s feelings—of loneliness, grief, ambivalence, desire—are in fact, enormous.  But she’s trained herself to manage them so that they don’t get in the way of her job.

And she’s excellent at what she does.  Other women work with Stella, detectives who bristle when their male partners appear to be condescending, or uniformed officers whose fierce demeanor radiates a “don’t fuck with me” strength.  These professional women counterbalance the female victims on whom Spector preys, although The Fall carefully avoids judging them.  They suffer from bad luck.  They all try to fight Spector off and do their best to save themselves.  They’re not to blame for their own ends.  Melissa Maerz, in her Entertainment Weekly review, notes that the writers show the aftermath of Spector’s crimes, as we see the victims’ families in shock and learn more about the victims after their deaths.  This careful rendering of the murdered women gives them lives to be mourned, filling in the outlines of what are usually two-dimensional, conveniently dispatched and apparently disposable people.  (Sonia Saraiya, in Salon, also wrote a nice piece about the series’ feminist analysis of violence against women.)

FS2 was disappointed that second season capitulated to the conventions of the genre by psychologizing Stella, making sure we know she is damaged to explained why she’s so good at her job and suggesting that her own family narrative makes her prey to Spectator’s mental manipulations.  In procedural suspense stories like these, the formula requires two damaged souls, one on the side of right and the other on the side of wrong, who battle to see who’s more capable of functioning in the world they’ve inherited.  Without some trauma fueling her single-mindedness, Stella Gibson wouldn’t be worthy enough as Spector’s opponent.

The series is filmed stylishly by cinematographer Ruairi O’Brien, who finds surprising angles on each scene and photographs Belfast in often jarringly beautiful ways.  The cinematography’s lush look seems at odds with such a dark and violent story, but it underlines the series’ thematic ambivalences.  Likewise, though Spector’s perverted sexuality is the root of his violence, The Fall doesn’t eschew sex but admits to its inevitable complications.  Spector manipulates Katie (Aisling Franciosi), his family’s 15-year-old babysitter, to fall in love with him.  Katie’s precocious understanding of the intimate link between desire and power offers another character’s perspective through which the distortions of sexuality and desire play out with tragic consequences.

In a post-coital mood of reflection after one of her one-night stands, Stella tells her male sex partner that men are afraid of women because they’re terrified women will laugh at them.  Women, on the other hand, she says, are afraid of men because they fear men will kill them. (This quote apparently originates with Margaret Atwood.)  All the The Fall’s characters carefully tread that fault-line of fear.

Anderson is sublime as Stella Gibson.  Like many independent, thoughtful, singular women crime-solvers in film and television, Gibson swims alone in an eerily empty pool (think Kerry Washington’s Olivia Pope, in Scandal).  She wears her beautifully cut clothes with a careless disregard that only heightens her beauty.  Gibson speaks so quietly—in a gorgeously upper-class but somehow languid English accent—that people have to lean towards her to hear.  And she tosses back her whiskey, neat.  Anderson gets Gibson’s edges and soft spots perfectly right.  No Botox is evident on the actor’s face, just a beautiful and somewhat lined, weary and wise platform for emotions that flicker and pass, and thinking that leads a squad to the side of righteousness.

Here’s hoping for a third season of The Fall.