Watching the Golden Globes isn’t even a guilty pleasure.  It’s more along the lines of eating something I know will disagree with me, but for some unfathomable reason, being unable to resist and utterly regretting it afterwards.  Jokes about who exactly comprise the “Hollywood Foreign Press” abound (most pointedly last night by Wes Anderson, when he won Best Movie comedy or musical for The Grand Budapest Hotel, surprisingly, given that his film ran against Birdman, which had taken so many awards in its category).

But the awards are still taken more seriously than they deserve to be—this year, NBC’s Matt Lauer appeared on the red carpet to ask the arriving stars stupid questions.  The awards bestowed seem capricious (Fargo for best mini-series or televised film event?  Really?  Against Olive Kitteridge, The Normal Heart, or even True Detective, which I liked less than most?).  And rather than a jury of their peers, the artists gathered are judged by critics whose names they gleefully (if rather xenophobically) can’t pronounce.

Sometimes, I think I watch awards shows like the Globes because it’s live TV, which always provides a frisson of possibility and pleasure.  What might go wrong?  Not just John Travolta mispronouncing Idina Menzel’s name or, last night, Kevin Spacey’s incredulous cursing bleeped out of the feed when he said I can’t “fucking believe I finally won.”  I watch hoping that the actors will take the opportunity of their very visible, live, potentially unedited public moment to say something of import.  That’s because I want to continue to believe that artists can be smart and politically engaged, as well as talented.

Some rose to the occasion:  George Clooney received the year’s humanitarian award.  The sublime hosts Tina Fey and Amy Poehler, of whom we didn’t see enough all evening, joked about the irony of his being recognized, given his wife Amal’s more obvious humanitarian accomplishments.  Clooney ended his speech by referring to the marches staged across the world that day that decried the attack against the Charlie Hebdo editors and artists in Paris.  He insisted we should refuse to live in fear and ended with “Je suis Charlie.”  I believed it more from him than from Jared Leto or the few other performers who made obligatory reference to world events.

But so few presenters even did refer to anything outside of the self-congratulatory moment.  The amazing, important, beautifully rendered Selma received only one award, for Best Song for “Glory,” which gave Common and John Legend a chance to mount the dais and talk earnestly about how much they learned about history from working on director Ava DuVernay’s remarkable film.  They connected the voter registration actions in Selma in ‘65 to the events of Ferguson and to the #BlackLivesMatter movement, and seemed obviously moved not just by being honored but by their involvement with a film so meaningful to them both.

Common said that DuVernay’s film “elevates us all and brings us all together,” remarking that the film “awakened my humanity.”  Legend said they wrote the song as inspiration for those fighting for their civil rights now.  But the film apparently didn’t inspire enough of the Hollywood Foreign Press to make it award-worthy, as Selma lost in all its other categories.  The impressive David Oyelowo was overlooked for his spectacular performance as Martin Luther King; DuVernay’s rightful Best Director trophy went to Richard Linklater instead, as did the Best Film award, a sad signal that Boyhood will most likely trump Selma at the Oscars, too.

Boyhood is actually a terrific, moving film (though FS2 remarked that the first third of the film is as much about the little girl as it is about the boy).  Patricia Arquette’s Globe win for her nuanced, authentic, and very personal role as the boy’s mother was well deserved.  Her speech made common cause with the hardships of all single mothers, and honored the grit and determination it takes to make your way alone with young children. 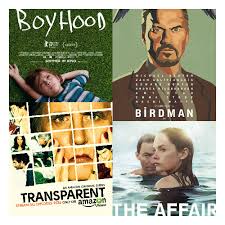 Boyhood turned out to be about a marriage and what it means to age into adulthood and beyond as much as it was about a little boy’s journey toward becoming an interesting young man.  In his acceptance speech, Linklater honored his own parents as he reminded the audience that families are important and parents are always flawed.  Sure, fine.  But is Linklater’s domestic drama with a circumscribed world view really more important than Selma?  We’re a nation that likes to forget its history as soon as it happens.  Shouldn’t Selma’s timely reminder be worth recognizing?  The choice of Boyhood over Selma, and DuVernay’s film’s invisibility through much of the evening, just seemed blatantly wrong.  I was disturbed all evening by how this snub seemed to close history back over on itself again, conveniently out of sight, out of mind.

Racial justice seemed off the table for the Hollywood Foreign Press.  Happily, Gina Rodriguez won for her role in the new television series Jane the Virgin, and breathlessly referred to her pride in representing a culture “who want to see themselves as heroes.”  But Viola Davis lost for her incisive performance in How to Get Away With Murder to the Ruth Wilson in The Affair.  (Wilson’s acceptance speech sounded only smug.)  Every time one of these white people or projects won against a person of color or a film or television show about race, the glaring slights seemed brushed away like so much lint on a fancy tux.

In the Best Actor in a film competition among men playing great men, Eddie Redmayne won for his performance as Stephen Hawking over Oyelowo as Martin Luther King.  Of course the strapping heterosexual guy (Redmayne referred to his new wife and their honeymoon numerous times in his speech) who had to twist his body, silence his voice, and perform from a wheelchair would win against the British African man playing the well-spoken, inspiring, burdened African American icon of the civil rights movement.  We could have predicted that.

And perky young Maggie Gyllenhaal won for The Honorable Woman over Frances McDormand’s remarkable performance as a middle-aged curmudgeon in director Lisa Cholodenko’s adaptation of Olive Kitteridge, because really, who wants to watch a woman age across 25 years in a mini-series?  McDormand sat in the crowd at the Golden Globes peering intently at the proceedings, with her hair wild and her face unadorned and her dress covering her chest.  Her demeanor and her costume marked her as an outlier in a gathering where 90% of the women wore gowns with plunging necklines that left all but their nipples exposed, their cleavages oiled and their breasts puffed out like ornaments.  Good for McDormand, whose presence and postured raised the middle finger at all that retrograde gender display.  Her acceptance speech would have been terrific.

Some of the women who won did try to insert a little gender commentary into the proceedings.  Gyllenhaal described how much more complicated women in film and television are becoming as characters, and Amy Adams, when she won for Big Eyes, thanked her co-nominees for challenging her young daughter to think about gender in more complex ways.  Jane Fonda and Lily Tomlin, the evening’s matriarchs, looked resplendent and affectionate with one another.  They joked as they gave the award for Best Actor in a musical or comedy that they were pleased to be dispelling the stereotype that men just aren’t funny.  Fonda ended the bit by proclaiming, “You’ve come a long way, baby!”

This sly gender reversal comedy began early in the evening, with the always sharp and funny co-hosts Fey and Poehler noting that people might have been impressed with Steve Carell’s two-hour-long make-up session for his transformation into his Foxcatcher character, but the two of them spent three hours that evening preparing for their roles as “human woman.”  Fey and Poehler also joked that Arquette’s role indicates what good parts there are for women over 40, as long as they’re cast before they’re 40.  And for the last bit in their opening, they played “Who would you rather?” a game in which they named pairs of male stars to illustrate that they have opposite sexual tastes in men.

Julianne Moore, accepting an award for Still Alice, said that early feelers about the movie indicated fear that no one would be interested in the physical deterioration of a middle-aged woman.  Moore made her speech with her own beautiful face proudly displaying the lines on her forehead and around her mouth.  Such obvious lack of surgical intervention was unusual in an evening where more women boasted immobile faces and frozen smiles.

The gays did okay, better, in any case, than the people of color nominated.  Although The Normal Heart took very few awards, Matt Bomer represented the film well when he won for his moving performance.  Humble and sweet, Bomer thanked his husband and their three kids.  He invoked the memory and spirit of those lost to HIV/AIDS and who continue to die from the virus, and thanked HBO for making films that people need to see and hear.

Likewise, Jill Soloway, winning for her Amazon-produced series, Transparent, and accepting the award in a men’s-style suit in a geometric blue and purple pattern, dedicated the award to the memory of Leelah Alcorn, the transgender teenager in Ohio who recently committed suicide.  Soloway also referred to her own trans-parent, and thanked her for “teaching the world something about authenticity, truth, and love.”  When Jeffrey Tambor won for his marvelous turn as Mort/Maura, the trans-parent on Soloway’s series, he said, “This is much bigger than me. . . . Thank you for the gift and the responsibility of Maura Pfefferman.”  Tambor dedicated his performance and the award to the transgender community, saying “Thank you for your courage, your inspiration, your patience, and for letting us be a part of the change.”

Fey and Poehler announced that this would be their last time hosting the Globes, which is a shame, since their pointed, feminist humor makes at least the beginning of the evening seem worthwhile.  Using Margaret Cho, however, to play a dour North Korean movie critic who popped up to comment occasionally, and whose presence let the hosts point out the absurdity of The Interview fiasco, only wasted time.

So what to make of all this?  Does it ultimately matter, the day after France and other countries mobilized to support global citizens against terrorism and for free speech?  Does it matter when you read the news and see what else is happening in the world, events so much more important and relevant than what stars are wearing and what a group of unknown international critics thinks about Hollywood’s work?  No, it doesn’t matter at all.

But then again.  As Amy Adams said when she talked about her four-year-old daughter, the stories these films and television shows tell do matter.  Clooney was right when he said you remember the work, not who got the awards.  Because it’s the work that tells us something about ourselves, as people, as a nation, as a global community.  It’s the work that tells us that gender is, in fact, being reimagined and that desire is various, on shows like Transparent and Orange is the New Black and in films like The Normal Heart and Olive Kitteridge.

Films like Selma, and even the other great-men films like The Imitation Game and The Theory of Everything, teach us something we might not have known or remembered about history, and why its effects are so lasting and relevant.  Our popular entertainments matter quite a lot to how we might stretch our imaginations and revise our dreams about who we are and might become, and in the process, encourage us to fight for social justice and real equality.

At least, I hope so.