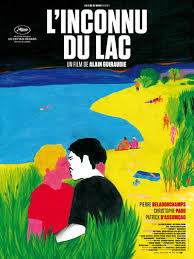 This French indie seems a parable for gay male life in a weirdly post-AIDS age, or perhaps a cautionary reminder of a time when HIV/AIDS was epidemic instead of chronic for communities of white gay men.   In writer/director Alain Guiraudie’s morality tale, young, handsome Franck (Pierre Deladonchamps) frequents a cruising spot by a lake in the French countryside, a little slice of beautiful nowhere that sits in the center of the film’s frame like Eden.  The first shot establishes the trees around which the men park at the end of the gravel road that leads to their idyll, as Franck drives his old Peugeot up to his regular spot, making a wide turn to line up beside the thick tree’s trunk.

Guiraudie cuts to Franck walking down the path that leads to the lake through the woods, towel in hand.  We see the lake from his point of view, as he arrives by the shore to find other men like himself in various stages of undress, sprawling on their towels.  Each of the men remarks Franck’s arrival, with a bored look or a casual wave; only one gets the honor of his European-style cheek kisses.  Guiraudie repeats Franck’s apparently mundane ritual to establish every new day in this Jeanne Dielman-, Chantal Akerman-style slice of gay life.

After his first swim of the season, Franck dries off beside Henri (Patrick d’Assumcao), a portly, quiet man who sits off to the side of the others on a slight rise, observing.  He and Franck soon establish an intimacy based not on sexual attraction, but on a terse and warm companionship.  Henri says he’s just been left by a woman, and insists that he comes to the cruising ground only for the quiet and the solitude.  But he likes Franck, even if the younger man leaves him to go off in the bushes with other men.

One of the most handsome, well-built men along the lakefront catches Franck’s eye in a smirk that promises a future, even as Franck watches him be lead into the brush by a young man with a proprietary attitude.  The consequences of that exchange of looks set in motion the film’s tense journey into the thickets of sex, death, and danger.  Michel (Christophe Paou) stays late one night to swim with the young man Franck thinks is his lover.  As Franck returns from a tryst with someone else, he stops among the trees to watch Michel and the other man wrestling far out in the water.  What seems at first playful turns mortal when Michel drowns his lover and swims back to shore, unperturbed that he’s left a corpse behind.

But instead of responding with fear, Franck pursues Michel, lured by his seductions and by their hot, unprotected sex.  Franck’s earlier date stopped their encounter when Franck said he didn’t have a condom.  But when Franck tells Michel he doesn’t want to use a condom, Michel blithely agrees, as though “protection” is way beside the point.

And so the filmmaker’s allegory plays out, as the ravages of HIV/AIDS infection is displaced onto Michel’s violence.  The isolation of this small gay male community allows Michel literally to get away with murder, as Franck keeps quiet about what he saw.  The day after the drowning, the others resume their affairs at the lake as if nothing’s happened.  Only Inspector Damroder (Jérôme Chappate), a nosy straight detective, who wears glasses and walks with his hands clasped behind his back like a parody of Sherlock Holmes or Hercules Poirot, cares enough to untangle the truth.  But Franck refuses to answer his questions, even as Damroder’s probing comes close to revealing Michel’s guilt.

To follow the allegory, the Inspector might represent Larry Kramer’s activist rhetoric during the AIDS epidemic’s earliest years.  Damroder hectors the men he questions about their ethics, given that they ignore the dead man’s towel and shoes on the shore and his car in the lot, carrying on their sexual encounters as usual.  And although Franck saw Michel commit murder, he’s intoxicated by love and sex and happy to have Michel for himself.  Damroder hectors Franck about his morals to no avail, much as in the “AIDS play,” The Normal Heart (in a film adaptation about to premiere, finally, on HBO), Kramer’s stand-in, Ned Weeks, rails against a system that will neither act nor listen, and a community of gay men who refuse to recognize their impending doom.  Although Damroder is an outsider to this closed world of lake-side cruising, he becomes a character device like Ned Weeks—a lone voice of reason in a place where conventional morality just doesn’t pertain.

Unlike Weeks in The Normal Heart, however, Guiraudie refuses to let Damroder play the film’s hero.  He also resists a tidy ending, fading out on his narrative at the height of its danger and tension.  If the film is in fact an allegory, the filmmaker seems to imply that if gay men refuse to protect themselves from an infection that will still kill them, they should be very, very afraid.

I can’t quite tell when Stranger by the Lake takes place, whether when the HIV/AIDS epidemic first began or now.  No external markers keep time.  Days pass as the sun moves overhead from afternoon to sundown, and each new day sees Franck drive up to park by the same rather foreboding tree, filmed from the same removed angle.  The cars the men drive are beat up and old, but then, none of these characters seem to have jobs.  No one has a cell phone, either, but perhaps there’s no service in the countryside.

Maybe the period is left purposefully vague so that Guiraudie’s morality tale might resound into the present instead of moldering in the past.  But nonetheless, Stranger by the Lake feels like a story from the early 80s, when silence equaled death and sex and death were so intimately linked.  Guiraudie makes sure that in certain shots, in fact, it’s not clear whether one man is having sex with or being murdered by the other, purposefully blurring that line to recall a moment in history when those acts were presumed to be closely conjoined.

Stranger by the Lake is a disquieting film that doesn’t sit easily.  The sex scenes are explicit and don’t appear to be simulated.  But the labor of these men’s passionate exertions and the tenderness of their post-sex interactions humanizes them and makes their desires ordinary, even mundane.

The actors are compelling.  Deladonchamps, as Franck, is appealing and winsome, an unambitious young man who is sensitive, if morally confused.  Deladonchamps plays Franck’s sexual appetites with persuasive ease, and his affection for the physically undistinguished Henri is sweet and surprising.  Paou, as Michel, looks like a French Tom Selleck, without the wry self-deprecation that made the American fun to watch.  The only humor in this film is carried by the supporting cast of gay men with odd proclivities—the masturbator who likes to watch and turns out to be harmless; the man in the bushes who pretends he’s looking for women instead of men.

The film’s uneasiness lands when you realize that there’s no elsewhere in this story, that Guiraudie will never follow Franck or Henri or Michel away from the lake to the rest of their lives.  Fantasies of sexual utopias like this lake-side cruising spot require a nowhere, and the singular bubble-like atmosphere of the lake and the film emphasize that here, there is no outside, only inside, no there, only here, no past or future, but only the present.  And that, finally, is its undoing.

Stranger by the Lake (L’inconnu du lac) (2013), Strand Releasing, 97 minutes, in French with English subtitles.  Available for rent or purchase on Vimeo on Demand.