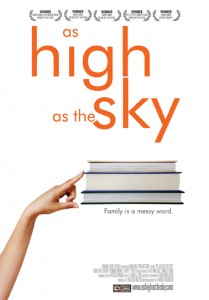 This women-produced and -starring indie is a sweet, subtle character study of two very different sisters whose common family tragedy sent their lives spiraling in entirely different directions.  Margaret (Caroline Fogarty), thirteen years younger than her sister, Josephine (Bonnie McNeil), was raised by two daft and reproving aunts when her parents died in a car crash.  Now a walking OCD symptom of a life spent repressing her early loss, Margaret’s life is upended when Josephine and her 10-year-old daughter, Hannah (Laurel Porter), arrive on her doorstep in LA, apparently as a lingering stopping point in their nomadic lives.

First-time film director and writer Nikki Braendlin and her adept cinematographer Tarin Anderson set up the inevitable clash of opposites.  After establishing that Margaret can’t have a glass out of place on her table or a pillow at the wrong angle on her couch or bed, Josephine and Hannah bound into her home with their messy lifestyle and emotional effusions.  Margaret nearly buckles under the weight of their liveliness.  By contrast, she is prim and overly proper, tucking her sister and her niece’s clothes into their drawers and suggesting tightly that they move some of their things into their car, since her guest room is small.  Where Margaret seems as thin and fragile as a wintered twig, Josephine and Margaret are ample and tough; where Margaret keeps her distance and wears her face like a remote mask, Josephine and Hannah lounge against one another, splash together in Margaret’s pool, and play silly games that overtly perform their emotions.

Margaret’s life has been hardened into rigid routine by multiple losses, from the tragic death of her parents when she was four-years-old to her boyfriend’s recent, unexplained desertion.  Because she’s been raised by two women invested only in tamping down messy emotions —the unseen aunts, Deborah (Dee Wallace) and Barbara (Jenny O’Hara), regularly hector her by telephone—Margaret is unable to explain her own feelings.  Most of her social interactions concern rules and organization—she’s a professional party planner, accomplished at celebrating the lives of others while her own goes by unnoticed and unremarked.

When Josephine and Hannah disrupt Margaret’s life, the character contrasts provide the film’s humor and its insight.  Hannah is wise and knowing beyond her years; Margaret is bereft and naïve, though talented and connected in her LA world of organizing parties for the rich and famous.  Once her relationship with her niece begins to form, the role-reversals allow Hannah to tell Margaret stories about her parents that Margaret’s aunts never deigned to share.  The triangulated relationship between Hannah, Margaret, and Josephine clarifies as they inch toward their entwined destinies.

Braendlin makes sure her characters accomplish all their unfinished business and articulate their unsaid emotions by the film’s bittersweet end.  You can see the moves coming in As High as the Sky, and the film’s redemptive trajectory is clear from the start.  But the filmmaker’s affection and compassion for her characters radiates from the screen.  And it’s satisfying to see this particular formula play out through rich, complicated women characters whose motivations and reactions are often surprising and fresh.

The three earnest, empathetic central performances carry the film.  Laurel Porter as Hannah is unstudied and wry without being irritating or overly precocious.  Fogarty and McNeill offer a crisp, unfussy portrait of sisters growing towards warmth and understanding, a gradual intimacy between women seldom seen in films.  In fact, the only male character here is Margaret’s ex-boyfriend, who’s represented in a photograph and never seen on screen.

As High as the Sky also disparages conservative notions of family.  While the aunts scoff at Josephine’s unconventional lifestyle and her emphatically single motherhood, Margaret grows protective of her progressive sister’s choices and ends by adopting them herself.  And even though the self-righteous aunts chide Josephine, they’re clearly “maiden” aunts . . . also an unconventional kinship choice.

Braendlin’s focus on women’s relationships (and her almost all women crew) is welcomed in an independent film landscape in which so few women have the opportunity to write and direct, and in a popular film scene in which so few stories address women at all.  As High as the Sky labors with love.  In the post-film DVD extras, Braendlin describes her own experiences with OCD.  And the film was shot in Fogarty’s actual home in Los Angeles, a beautiful modernist bungalow that let Braendlin and Anderson take advantage of the home’s natural light and architectural surfaces and angles.  The filmmakers adopt a leisurely narrative pace and craft unobtrusive camera work that allows spectators to focus on the women’s faces and their emotions.

The pay-off is a sweet, specific study of two women and a girl trying to figure out how to love one another and to lead honorable lives in the face of loss.  I’m game for that.