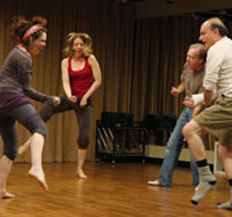 Annie Baker’s play, in a wonderful production directed by Sam Gold at Playwrights Horizons, takes place in the familiar, anonymous sterility of an all-purpose room at a community center, the kind of room that so often doubles as a crucible for community theatre and other arts. Exercise equipment clutters the floor, alongside the detritus of other objects useful for other kinds of groups. All become extraneous to the do-it-yourself creativity and faux self-help spiritualism-cum-acting lessons offered by the well-meant but self-involved would-be theatre guru, Marty.

As the oblivious leader of the four-member class, the middle-aged woman (played with a perfect balance of empathy and tone-deaf self-involvement by Deirdre O’Connell) tries to inspire her tiny band of followers to explore their inner psychology as a prerequisite to emotionally honest acting. But as Lauren (Tracee Chimo), the socially maladroit but emotionally acute teenager who’s the youngest person in the mismatched group of players notes plaintively, it’s not at all clear how any of this is going to help anyone learn how to be an actor.

Still, for Marty, the self-exploration and pseudo-psychologizing that are her stock in trade provide their own reward. It’s not at all clear that Marty has ever acted professionally; she’s one of those so-called artists who hang out a shingle on the basis of a happy fantasy rather than real life experience. Clearly, she’s cajoled her husband, James (Peter Friedman), to be part of the group, and he tries his best to go with the flow until the psychobabble gets the better of him and he takes the trust exercises a bit too far.

Schultz, Marty’s other male student, is a hapless divorcee with pent-up anger issues.Schultz is still not over the fact that his wife has left him, but he falls hard for Theresa, the supposedly “real” actor who’s moved to this remote hamlet of Shirley, Vermont, to escape her own relationship issues, as well as her own failed career. She’s just broken up with her boyfriend, an older man who controlled her jealously, a rather masochistic involvement that Theresa seems to have enjoyed more than she’s willing to admit.

Marty hurls herself into grooming this ragtag group, putting them through the ridiculous emotional recall, storytelling, and trust exercises familiar to any one who’s taken a community acting class at their local high school or playhouse. She asks the students to interview one another and then perform the narratives they collect, stories that Baker uses to structure the play’s cumulative revelations. Telling personal stories borrowed from their partners in a first-person form provides a rather sweet, halting demonstration of how the students get to know one another.

Since it’s impossible for them to perform one another without the barest hint of editorializing, we come to know the characters through how they describe and observe one another’s flaws and discrepancies during their interviews. As the six weeks of the class tick by, announced by slides projected between each scene, the characters’ back-stories are filled in a bit more, in tales that the students eventually use against one another as the trust exercises back-fire.

Each of the characters becomes likable in their own slightly askew way, as Baker gradually reveals their humor, their pain, and their sorrow. Several times, they lie on their backs on the studio floor trying to count collectively but consecutively to ten without stepping on one another’s numbers. The exercise is meant to foster trust and good listening skills. That the small ensemble can’t actually get to ten until near the play’s end marks both their failure and, at last, the ways in which they have indeed grown closer, more attune to one another’s presences and habits, their desires and frustrations.

O’Connell, as Marty, does an excellent job creating the pseudo-sincere care and attention of the not very talented acting teacher. She carefully watches each improvised moment she sets up among her pupils, positioning herself for optimal observation in a contrived, “artistic” pose, never explaining why she’s putting them through these emotional paces and never articulating what exactly they’ve done well or poorly. That each of the students simply follows her lead, rarely questioning her motives or their acting education, rings too true. I could hear who among my fellow spectators had taken such a class by the knowing laughter we shared at those familiar moments.

Marty’s husband, James, tries hard to be supportive of his flaky artistic wife. Marty shares the story of their meeting, a romantic moment at a friend’s wedding that depends on the kind of kismet in which only an aging hippy bohemian could continue to invest. But it becomes clear over the course of the play that their happiness is frayed, the romance fading. Their daughter, Erin, has stopped speaking to her father because Marty revealed to her a meaningless indiscretion James committed during his first marriage. James is devastated by his daughter’s silence and her sudden allegiance with Marty against him.

Friedman conveys James’s perplexed confusion over these sudden turns in his life, finding emotional candor in a character without a whole lot to say. James’s vulnerability makes him prey to the sultry charms of Theresa, the failed New York actress who’s here in the middle of nowhere to heal her own emotional wounds, and winds up seducing both men (and the teenaged Lauren) with her comfort in her body and her apparently open, if facile, vulnerability.

The versatile Reed Birney (whose raw performance in Blasted at Soho Rep was one of last season’s best) is excellent here as the wounded Schultz, who quickly falls in love with Theresa and is just as quickly and violently devastated when their brief affair doesn’t last. His need is palpable, even before clueless Marty makes the unsuccessful couple act out a scene in which his need becomes his only dialogue. Birney plays Schultz’s mercurial mood swings convincingly; even his sudden, menacing aggression seems justified when his rage boils up out of nowhere in the midst of his “objective” exercise with Theresa.

The play’s humor keeps it entertaining and holds at bay what could be more maudlin moments. As the baleful Lauren, Chimo is superb at physical humor; her expressions, as she reacts to the sometimes peculiar interactions of the adults, are priceless. Chimo can raise an eyebrow, widen her eyes, clench her fists, or raise her shoulders and communicate an entire paragraph of response to the absurdities of what she sees.When in the penultimate scene Marty asks her students to write down, distribute anonymously, and then read out loud something about themselves that they’ve never told another soul, it’s obviously Lauren’s slip of paper that says she secretly believes she’s smarter than everybody else in the world.

Even though she’s been an awkward, comically withdrawn presence through much of the play, that personal secret is clearly true. Lauren knows that her parents aren’t happy; knows that Marty and James’s marriage is headed for its end; sees through Theresa’s seductions while she’s also attracted to them; and is the only character in the play who expresses well-founded doubt that Marty’s ministrations are really going to make them better actors.

As the orchestrator of what become emotionally acute confessions, Marty is as devastated as the others at what she hears. But she persists, like the soulful artist she believes herself to be, and ends the six-week class by asking Lauren and Schultz to act out one final improvisation, in which they meet one another 10 years later and share news of their lives.

The scene is both hilarious and poignant, as Schultz takes the opportunity to say out loud how Theresa “messed with my mind,” and for Lauren to predict that Marty and James will divorce, along with her parents. While Schultz asks the probing questions, playwright Baker clarifies that it’s Lauren who’s been prescient and wise all along, as she sees clearly into their collective futures.

Lauren enrolled in the class because she wants to be an actress, but realizes as she improvises her view of the future that she’ll be better off as a veterinarian, and sees herself 10 years out happily mated with a boyfriend in the same field. She’s kept in touch with Marty, who it turns out really does care for the odd young woman, predicting that at least one of the relationships so cavalierly dissected by the acting class has been established “for real” and will last. That final moment is both sad and hopeful, as Lauren’s improvised vision brings each character to a rueful but useful understanding of who they really are.

Circle Mirror Transformation is a lovely evening of theatre: fun and funny, smart and knowing, and hugely generous about the imperfect characters Baker portrays so simply and clearly. The play might not change your life, but like the acting class Marty wants so much to offer, it does offer insights into what our lives are and might be about, and demonstrates that the artistic impulse to see something about the human condition really can be felt, even in those tired, empty, all purpose rooms.

The production’s run has been extended to November 21.