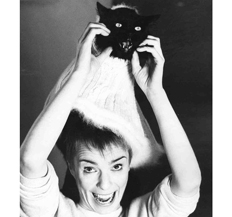 Holly Hughes has been plying her particular brand of solo performance for over 30 years now, experience that provides her authority and refreshing, admirable self-assurance in her latest, The Dog and Pony Show (Bring Your Own Pony), which ran for two, too short nights at Dixon Place during their recent “Hot” Festival.

Holly’s last full-length piece was Preaching to the Perverted (2000), which detailed her experience as a so-called pariah during the culture wars in the 1990s, and her run-in with the NEA and the subsequent Supreme Court case over its grants to individual artists. Dog and Pony takes a different turn, narrating Holly’s attachment to the dogs with which she and her partner, the eminent lesbian anthropologist Esther Newton, have created their family.

Hughes’ politics here are as incisive as usual, but also personal and subtle. The self-deprecating irony is gone, as Holly takes physical, emotional, and intellectual command of Dixon Place’s gloriously wide, deep space. Holly and director Dan Hurlin set her story within simple décor: a small, comfortable armchair to which Holly retreats to tell some of the story; a tall wooden stool on which she sometimes perches; and a music stand from which she occasionally consults her script to mark her progress through the tale.

Slides of historical women and their dogs run behind her, punctuating the story with humor and a gentle reminder that this is an on-going, timeless relationship, into which Holly and Esther find themselves cast. In one of the show’s funniest visual moments, Gertrude Stein and Alice B. Toklas pose in a projected photo with their poodle between them. As we watch, the image morphs into Newton and Hughes, neatly tracing the legacy of famous lesbian couples and their canine kids.

In another very funny visual moment, lesbian singer Phranc is on hand for “Phranc Talk,” a segment in which she films Holly and her Norfolk Terrier, Ready, preparing to execute a difficult agility course. In an affectionately satirical style reminiscent of Best in Show, Phranc narrates as Holly and Ready go through their paces. Ready scurries obediently across the course, bounding up steep ramps, down see-saws, through tunnels, and over challenging obstacles, while Holly offers vocal encouragement to keep the pup on track as they move through the stations together.

Much of Dog and Pony pokes good-humored fun at the routines and obsessions of “dog people,” in this case largely middle-aged white women, whom Holly says need their bodies to carry stuff around the same way they need a good truck, and who, in erstwhile lesbians-of-a-certain-type style, simply throw clothes over themselves that immediately signal that they’ve “given up.”

Yet rather than belittling this community—of which she clearly considers herself a part—Hughes understands that at a certain point, the body becomes a vehicle, like those trucks, a means of delivering something or of getting somewhere rather than an end in itself. Even the funny bit about how these women dress signals a freedom from convention, a liberation from worrying about how they look so that they can concentrate on what they do and what, at the end of the leashes they hold with such seriousness and care, their dogs can achieve.

Likewise, Hughes’ description of her life with Newton and their dogs becomes a sly allegory for the vagaries of lesbian families. Hughes honors the importance of the primary domestic arrangements many of us have created with partners and beloved pets, taking seriously the nature of these special kinship structures.

The reference to offspring is always present, happily morphing into stories about their dogs. An anecdote about Holly and Esther waiting until the eleventh hour to reproduce turns into the hilarious and instructive tale of taking Newton’s prized poodle, Presto, for sperm collection. Holly describes Presto as her son, and admits she felt as if she were taking him to a whorehouse for the first time when they take him to the vet for an appointment with a flirtatious bitch.

She relates her mortification when Presto’s interaction doesn’t produce enough sperm to make him a good stud. That even in the world of dog breeding gender presumptions go without saying is part of the story’s moral, but Holly plays it for laughs instead of lessons. She describes the dog’s maleness in their lesbian household as a challenging curiosity (Newton, Hughes says, won’t have the dog fixed because she likes to look at his balls).

Likewise, the story of Hughes and Newton buying a sectional sofa so that they and their nine dogs can have “family time” together paints not just an hysterical picture of “dog lesbians” (as Hughes calls them), but also describes a viable alternative to more conventional lesbian families (if that’s not a contradiction in terms). I can still picture Holly and Esther on their ever-growing sofa, surrounded by terriers and poodles competing for their humans’ attention.

In Dog and Pony’s opening speech, Holly announces that the lesbian community remains divided:there are dog lesbians and cat lesbians and the asthmatics who can’t breathe either way. But her declaration underlines that the lesbian community continues to exist and even thrive despite these (and obviously other) differences. Holly continues to enjoy community and to find it important, a refreshing commitment in the face of its more trendy disparagement.

She might have left New York and the pleasures of WOW, the theatre “home for wayward girls” comprised of performance artists Holly recalls were kicked out of one feminist organization or another in the early 80s. But in her Michigan residence, she’s clearly embraced another community of women with practices as equally out of the ordinary. In fact, she says, dog people are a lot like artists; no one cares what they do.

Alongside stories of dog agility, breeding, and the women who know just how to do it come Holly’s observations about being a lesbian and a feminist of a certain age, about how her work and her life have always been inextricable from the politics of gender and sexuality. This aspect of Dog and Pony is poignant, politically smart, and often moving. When Holly announces her identifications, her performed declarations are really rather performative—that is, they do something to remind us of how potent the words “lesbian” and “feminist” once were and still can be, said with the conviction and faith and historical depth of experience Holly brings them.

A vignette about Holly wearing a “This is What a Feminist Looks Like” t-shirt to give a lecture at a university and the political fallout that ensues from her talk is terrific, as it illustrates the muddle of expectations people bring to contemporary politics. Invited by a lesbian academic to address the bad reputation of feminism among college students, the woman winds up accusing Holly of giving a talk that only exacerbates the stereotype of feminists as “angry lesbians.” Astonished, Holly retorts that “angry” and “lesbian” are her schtick—why was she invited if that’s not what this woman wanted?

Despite ironies such as these which she continues to track, Dog and Pony presents Holly in a generous mood. The lovely writing describes her relationship with Newton, and with a new best friend in Ann Arbor, where Holly is now a professor in the Art Department at the University of Michigan. These relationships clearly matter to her a great deal, and their texture and import color her stories with a new depth of feeling.

I consider Hughes one of the most important artists of our generation, someone who’s always taken formal risks to tell stories that too often go unheard in other cultural venues (mainstream, lesbian, and feminist alike). This new show retains her trademark outré humor, but also delivers authoritative insights in a style that’s beautifully modulated and tonally diverse.

Holly’s stories ring with the confidence of a cultural warrior who’s come out of the fray not just intact, but wiser, with a distinctive clarity about where she’s been, where she’s going, and what it all means. We’re invited to laugh with her, in Dog and Pony, to see the grace and beauty of ordinary people with their crazy but somehow humble obsessions.

For the performance’s final, lyrical bit of image-making, Holly stands downstage center and describes a silver wolf, with four legs that “spell fear,” coming out of the woods to assume the place created beside human beings when evolution left us without as much to do. Dogs, she protests, don’t descend from wolves; she credits the animals with agency, suggesting they chose their place beside us to help create us, just as we, with great empathy and affinity, help to create them.

As Holly takes her curtain call, one last video clip plays of a woman handling a Golden Retriever that she’s trained to dance beside her. The two perform in a large, nearly empty arena to music we can’t hear. Both of them seem thrilled to be moving in sync, dancing as a cross-species couple. The grainy image is striking and poignant, an homage to mutually fortifying, joyful and enabling relationships between humans and canines.

Thanks to Holly’s beautiful rendition of Dog and Pony Show, those relationships become a model for us all.