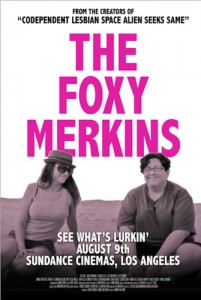 Madeleine Olnek’s madcap film The Foxy Merkins stars her go-to lead, Lisa Haas (Codependent Lesbian Space Alien Seeks Same), as Margaret, a hapless, green-horn lesbian hooker who arrives on the streets of Manhattan fresh from a women’s studies degree with no skills and no money.  Taken in by a more seasoned grifter, the heterosexual, upper-middle class Jo (Jackie Monahan, also an Olnek favorite), the dynamic duo prow the streets by Talbots, waiting for wealthy suburban matrons eager to pay them for sex.  In Olnek’s conceit, New York thrives on this same-gender underground economy, in which closeted female conservatives take their delight with women who’ve resorted to servicing them to survive.

Filmed with grainy grit, Olnek imagines a female hooker subculture that mirrors that of the male hustlers American movies have turned into heroes before them.  Olnek sees the desires these prostitutes fulfill as absurd and silly; that they’re paid for by conservative closet cases neatly makes her point about American political and social hypocrisy.  The film’s politics, though, are light and implicit, as a string of comic situations propel the plot.

Olnek directed and wrote Foxy with Haas and Monahan, whose witty dialogue sounds improvised, naturalistic, and comically understated.  The actors (both have stand-up comedy credentials) are delightful together as Margaret and Jo.  Monahan’s Jo is tall and slim, with a patrician-looking face often complemented by a jaunty men’s hat.  Given that Jo has run away from a well-heeled suburban home of the just the sort that produces her clients, Monahan looks the part.  When Jo rolls out from her makeshift bed underneath the sinks in the women’s bathroom at the Port Authority Bus Terminal, she looks beautiful nonetheless.  Margaret, by contrast, sleeps nearby under a large sheet of transparent plastic, but no one using the restroom notices her because in her stillness, she looks like a pile of trash.  When she throws off her cover and runs her fingers through her hair, Margaret is still disheveled and sleepy-looking, which gives the character an irresistible charm.

Olnek advertises the film as a lesbian buddy movie, in the tradition of all those guy films that put unlikely types together and follow their journey toward bro-mance.  Because Monahan and Haas’s on-screen relationship clicks , the gender parody works.  Jo is the Laurel to Margaret’s Hardy, the Mel Gibson to her Danny Glover, the John Voigt to her Dustin Hoffman.  Monahan launches the jokes and Haas reacts, with an open, fresh-faced naivete that’s sweet and appealing (Haas’s cheeks even get red in Margaret’s more embarrassing moments).

The Foxy Merkins builds in a series of vignettes, framed by Margaret’s interactions with Ashley (Jennifer Prediger), the woman who will become, at the inevitably happy end, her real love interest.  In between, Margaret and Jo have adventures servicing strange women.  For those who know the downtown performance scene, where Olnek began her career as a writer-director at the lesbian/feminist/queer WOW Café, the film’s cameos are great fun.  Babs Davy, of the Five Lesbian Brothers, and her partner, Betsy Farrell, share a scene as look-alike conventioneers who insist on their heterosexuality even as they hire Margaret and Jo to enact their lesbian fantasies.

Deb Margolin, the solo performer/writer/teacher who began at WOW with Peggy Shaw and Lois Weaver as a founding member of the Split Britches trio, plays a woman with an MFA in Drama and no money, who picks up Margaret in front of a movie theatre where she’s about to see a digitally re-mastered version of Lassie.  Margolin’s character crouches between  Margaret’s knees at their seats, clandestinely eating her popcorn and drinking her soda while Margaret tries to watch the movie.  Margolin’s wide eyes and wordless performance—the perfect complement to Haas’s befuddled incredulity—say everything about the complexities and comedy of desire.  Performers Rae C. Wright, Elizabeth Whitney, and Susan Ziegler (of Olnek’s Codependent Lesbian Space Aliens) also have cameos.

Alex Karpovsky (Girls) has two small roles, one as a clandestine salesman who invites Margaret and Jo by buy “merkins” out of his trench coat when he meets them in a cemetery (don’t ask).  Jo explains that a merkin is a vagina toupee, worn by prostitutes who shave their genitals.  (Apparently, the OED traces the first reference to the early 1600s.) Hence, the film’s title.

Olnek and company’s humor ranges from sly social observations—Jo notes that all their middle-aged white female clients listen to Sade—to silly toss-offs—Jo tells Margaret about the supposedly high prevalence of suicide among dentists, which explains why it’s always “four out of five” who are quoted in statistics.  A running gag includes a client (Ziegler) whose fetish involves being raided by police while she and Margaret are together in a hotel room.  The clueless, naked Margaret doesn’t realize she’s playing a “scene”; when the fake cops insist she “drop it” and she has nothing in her hands, she earnestly tries to wipe her empty palms clean.

On the other hand, when the police-fetish client brings her African “maid” (Frances Bodomo, a Ghanaian filmmaker who’s the film’s associate producer) on one of their dates, the racial politics get a bit dicey.  When the two white male “police” intrude again and the maid surprises them by entering from the bathroom she’s been cleaning, the cops appear to shoot her dead.  Margaret’s client remarks that the police always shoot the first black person they see, and Margaret looks on in horror as they drag her “body” from the hotel room.  In the wake of Ferguson and the protests against police violence, the joke seems tasteless, even though you can’t fault a film written and shot well before current events.

Olnek’s humor is zany but sly, and her work, graced with Haas’s always glowing presence, is always sweet underneath the satire.  The Foxy Merkins was an official selection at Sundance 2014, enjoyed a December 2014 run at the Made in New York Media Center in Brooklyn, and is now touring the international film festival circuit.  Olnek holds down an important corner of the lesbian/queer performance/film world, creating uniquely earnest, fun comedy with an off-kilter parodic sensibility.  Codependent Lesbian Space Alien Seeks Same is available on various streaming platforms; Foxy Merkins will be available soon (sign up for alerts here); two of her short films (Hold-Up and Countertransference) are free on YouTube; and the script of Codependent Lesbian Space Alien will be out in 2015 as part of the eagerly anticipated collection of material from the first ten years of the WOW Café co-edited by Holly Hughes, Carmelita Tropicana (Alina Troyano), and me.  Enjoy!