I’ve been reading around in the blogosphere, catching up on current debates and controversies.  I noted with interest Laura Linney’s remarks, on the occasion of her Crystal Award for women in film, as well as playwright Mike Lew’s response to the Lilly Awards on his blog; Jonathan Franzen’s sudden and surprising shout-out bout the unequal status of women in theatre, which he wrote in respond to Frank Buni’s New York Times op-ed, “Sexism’s Puzzling Stamina,” about gender discrimination; and the frank conversation about race and representation between director Mary Zimmerman and Silk Road Rising Artistic Director Jamil Khoury on the company’s blog.

I find this recent flurry of conversation about race and gender in theatre heartening, although the more pessimistic (though rarely revealed) side of my psyche thinks, as usual, that these debates are cyclical rather than sustained.  And why, after all, don’t they change anything about the status of women and people of color and queer people in theatre

Franzen’s letter to the editor in the Times struck me as something of a red herring, a diversionary tactic to displace scrutiny from the still unequal position of women in literature.  After all, this is the author who famously disparaged Oprah Winfrey for selecting his novel, The Corrections, for her book club, dismissing the project as too low-brow for his participation.  And this is the novelist whose work is reviewed so frequently that the gender imbalance in book reviewing it demonstrates prompted the organization VIDA to begin crunching numbers and publishing the appallingly unequal results.  As novelists Jodi Picoult and Jennifer Weiner pointed out at a public conversation at Princeton last April, gender and genre are still intimately intertwined.  Franzen might be doing women in theatre a favor with his letter, but why doesn’t he also put his shoulder behind increasing the number of book reviews accorded to women writers?

Several theatre people recently articulated the gender inequity problem in our field very nicely.  Laura Linney’s remarks beautifully demonstrate her commitment to fellow women artists, outlining for the Women in Film crowd who presented her award the gender differences she found in working in film compared to her native theatre community.  She notes that women film actors rarely have scenes together; that few women work on film crews; and that when women film producers visit sets, they tend to keep to themselves, creating a climate of gender isolation and perpetual singularity.  Linney exhorts women to mentor one another, to share knowledge and connections, and to listen to one another’s experiences and insights and try to do something to improve their common situations. 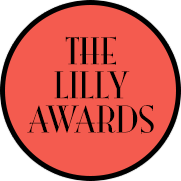 Likewise, Mike Lew, on his blog, describes attending the Lilly Awards, named in memory of Lillian Hellman and begun in 2010 by playwrights Julia Jordan, Marsha Norman, and Theresa Rebeck to honor work by women in theatre.  Lew does a really nice job of excoriating artistic directors who refuse what they see as “quota systems” in season selection and who excuse their white-male heavy selections under the rhetoric of “excellence” and choosing the “best play.”  As Lew writes, “The ‘best plays’ system allows you to choose based on gut decisions, without any metrics for measuring success, without any accountability for the larger effects that your decisions have on the ecosystem of theater.”  Theatre shouldn’t be a meritocracy; it should be a cultural production practice with some accountability to the diverse local and national communities from and with which it speaks.

At a time of year when theatres around the country announce their upcoming seasons, I’m fascinated once again by which companies I can count on and which I can’t to be ethical about gender, racial, and ethnic diversity in their selections.  Leading the pack with numerous women playwrights and directors again in the 2013-14 season is Playwrights Horizons.  Their spectacular selections include Anne Washburn’s Mr. Burns:  A Post-Electric Play, directed by Steve Cosson; Marlane Meyer’s The Patron Saint of Sea Monsters, directed by Lisa Peterson; Madeleine George’s The (Curious Case of the) Watson Intelligence, directed by Leigh Silverman; Sarah Ruhl’s Stage Kiss, directed by Rebecca Taichman; Kirk Lynn’s You Mother’s Copy of the Kama Sutra, directed by Anne Kauffman; and Fly by Night, a new musical conceived by Kim Rosenstock and written by Rosenstock, Will Connolly. and Michael Mitnick.

Washburn’s Mr. Burns is a terrific post-apocalyptic meditation on popular culture, systems of exchange, and the stakes of building and maintaining community when the social contract is sundered.  George and Ruhl are two of my favorite playwrights, whose elastic use of dramatic form and structure is matched by their commitment to imagining the potential diversity of human relationships.  Meyer returns to theatre after many years writing for television.  Her early play, Etta Jenks, was a complicated look at the porn industry and its impact on its women workers.  Kirk Lynn (a co-artistic director of my favorite Austin-based theatre company, the Rude Mechs) is always a smart and inventive artist, using dialogue and settings to skew narrative in unexpected ways.  And the assembled directors are terrific; four out of the six announced so far are women.  How excited am I for this season?

The Women’s Project, under Julie Crosby’s expert leadership, had a good 2012-13 season, leading me to look forward to the next.  All three plays, presented at City Center’s Stage II, were compelling and well-executed, and each production used the three-quarter thrust in entirely inventive ways.  Bethany, with America Ferrera, written by Laura Marks and directed by Gail Taylor Upchurch, was a terrific exploration of economic exigencies told from the perspective of a woman desperate to retrieve her child from foster care.  Jackie, Gitta Honegger’s translation of Austrian Nobel Prize winner Elfriede Jelinek’s one-woman play, was directed with fluid momentum by Tea Alagic and performed with manic but precise verve and exciting energy by Tina Benko.  And Allison Moore’s Collapse, directed by Jackson Gay, also addressed the complications of how we balance psychic and economic constraints and continue to maintain productive social relationships.  The season was theatrically, intellectually, and politically astute and inspiring; the Women’s Project will announce their next season in mid-July.

I won’t do an exhaustive review of the season announcements I’ve read so far.  I’ll only say I think it’s important to notice how the plays and productions selected are distributed across gender and race, and to suggest that if the seasons are written and directed exclusively by white men, I won’t be subscribing or donating money.  Women playwrights and directors should be afforded just as many opportunities to succeed or fail as white men.  (Speaking of which, I found Annie Baker’s The Flick one of the best shows mounted at Playwrights last season, despite the controversy over its length.  The play flew by for me, captivated as I was by the nuances of those three, moving characters and the narrative of the old-fashioned celluloid cinema replaced by a digitized movie chain.  Gee, people seem very indulgent of Tony Kushner’s long plays . . . but not Baker’s?)

Two last thoughts.  I was cheered by the exchange about The Jungle Book adaptation that unraveled in Chicago and online this last week.  In an interview with Chicago Magazine, director Mary Zimmerman was quoted saying what seemed to be very offensive comments about race and colonialism in the context of adapting the Disney movie and Kipling’s book for the stage.  Jamil Khoury wrote a very smart, impassioned critique of her interview, called “The Trouble with Mary,” which prompted the Goodman Theatre, which is producing The Jungle Book, to arrange a meeting between the two theatre artists.

The upshot of their personal conversation seemed a great deal of good will and an email interview Khoury conducted and published that allowed Zimmerman to clarify her thoughts and her work on the production.  Would that more artists were willing to have public conversations about the political impact of their artistic choices, and would that more theatres took seriously their responsibility to public discourse and debate.

Finally, I’m spending a few days in San Francisco this week, accompanying The Feminist Spectator 2 on a research trip to Mill Valley, where she’s interviewing middle- and high-school students and the artists who work with them about their commitments to amateur musical theatre.  As part of her research, we attended for the second year in a row the famed Mountain Play at the top of Mt. Tamalpais, which celebrated its 100th anniversary producing theatre 2,000 feet above sea level.  The natural amphitheatre, which seats 4,000 people, was sold out for all six performances this year of The Sound of Music, presented by amateur performers (except for the Equity actor who played the Captain). 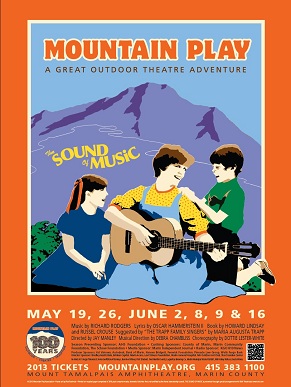 I was charmed once again by the community-building capacity of theatre, as Stacy and I observed the intrepid spectator take school buses from the local high school in town up the winding road to the summit of Mt. Tamalpais.  The drivers avoided the bikers who crowd both lanes on the weekends, making their torturous route to the top for their exhilarating ride back down to the bottom.  As you turn into the final leg of the road before you leave the bus to walk to the theatre, the views off the side of the mountain make you feel like you’re flying high above the clouds layered over the shimmering sea below.  Once you arrive at the theatre, you can see the Marin headlands and San Francisco Bay stretched out in front of you in a spectacle so breathtaking, you wonder how in the world you’ll wrest your eyes away to watch the play.

But the Mountain Play folks take advantage of the beautiful natural setting to mount really good productions of classic American musicals.  The Sound of Music was particularly wonderful, as director Jay Manley (new to the organization this year) moved the cast full of children playing children and adults playing nuns with an ease that let the musical clip through its paces.  Manley also took advantage of the road into the playing area to use a real 1940s-style automobile and a real motorcycle with side car to stage the Nazis chasing the von Trapps out of the Austrian national performance arena and over to the abbey late in the play.  Stacy tells me that using the environment in inventive “real” ways is one of the trademarks of Mountain Play.  But the spirit of fun and fantasy and friendly community the production inspired was moving and exemplary.

We arrived early to watch the cast rehearse, enjoying those playing the von Trapp kids going through their paces in cut-off jeans and sunglasses and seeing the nuns out of their habits singing in their flip-flops.  We watched the audience arrive with their coolers and picnic baskets full of food and drink, slathering on sunscreen and renting stadium chairs to ease their backs on the rock benches that serve as seating.  We enjoyed folk performances by kids from a local music school prior to the show, and finally, we tried not to sing along too obviously to “Climb Every Mountain” and “Doe a Deer” as the cast used the mountain setting to tell the story of Maria and the Captain and the children and the Nazis (whom the audience booed and hissed loudly at each of their entrances).

Gazing back down into the bay at the performance’s end as we made our way to the parking lot, I thought again how good theatre experiences really do put you on top of the world.  It doesn’t get much better than that.