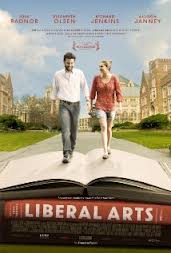 Josh Radnor wrote, directed, and stars in Liberal Arts, a lovely film about an emotionally “stunted” 35-year-old man who visits his alma mater and realizes he’s never really grown up.  But it’s also a film about coming to terms with aging in the best possible way, by imagining a life lived simply, with love and respect and affection for who we’ve been and who we might become.

It’s also a film about reading books and talking about them, about loving poetry and music and the way artists can transform how we understand our lives.  Liberal Arts is a paean to the delights of literature and music as much as it is a tribute to the life of a mind nestled in a happily loved body.  And for all that, it’s light, funny, and sweet.

Jesse (Radnor) is an admissions officer at a college in New York, where an opening montage shows him repeating a similar sales pitch to potential students, all from the same position in the same seat in his same old office.  He’s clearly stuck and uninspired, even if his position keeps him close to the college days he remembers as among the best of his life.

When a beloved former professor invites Jesse to his retirement dinner back on his old campus, Jesse jumps at the opportunity to return.  He’s just broken up with a girlfriend and some thug stole his clothes from his Brooklyn Laundromat.  Mostly, he haunts his local bookstore, where he reads the last few pages of every book he buys, which he stacks with many others on his bedside table.  He lives his solitary life more in books than in the world.

Jesse comes alive when he returns to his old college in Ohio.  (Though it goes unmentioned until the final credits, the film was shot at Kenyon College in Gambier, Ohio, where Radnor went to school.) The camera loves the idyllic, green, pristine campus as much as Jesse does.  He can’t stop himself from jumping on the benches that line the quad’s walkways, or from rolling on the grass, or from grinning at students throwing Frisbees and reading on the lawn.

His visit back, though, underlines Jesse’s long-brewing mid-life crisis.  His retiring professor, Peter (Richard Jenkins in an empathetic, wrenching performance), insists he’s thrilled to be done with faculty meetings, but sobers the mood at his own farewell dinner when his mixed emotions barely allow him to speak.  His colleagues leave the party embarrassed by his anguish, but Peter can’t read their cues, and spends an excruciating scene trying to persuade the department chair (a man he hired twenty years earlier) to let him teach for several more semesters.

But Peter has already been replaced by a hire fresh out of graduate school, leaving the older man to confront a life that feels unmoored and unfamiliar after decades on the faculty.  He tells Jesse that the world’s dirty secret is that no one ever really grows up.  Peter and Jesse both feel like they’re still nineteen, despite physical evidence otherwise.

If Peter represents the end of a certain life line, the undergraduate Zibby (the magnificent Elizabeth Olsen) seduces Jesse with his own nostalgia for beginnings.  She actually is nineteen, though she says she feels more “advanced,” and is partly attracted to Jesse for the jump-start he promises on her own life’s journey.

Their kindred spirits seem to dissolve their age difference.  Zibby shares her new love of classical music with Jesse, who finds Beethoven and Rossini transforming his quotidian New York City habits when he returns from Ohio.  They hand-write letters to one another; Radnor films them separately delighting in their prose, as they court one another with old-fashioned pen, paper, and art-fueled feelings.

Although he’s drawn to Zibby, Jesse can’t help doing the math when their relationship heats up.  With a sixteen year span between then, Jesse is embarrassed by his attraction to a young woman who wasn’t even born when he was a teenager.  But he follows his heart, returning to Ohio at Zibby’s request, until she asks him to spend the night with her.  When she admits that she’s a virgin, her sexual inexperience forces Jesse to articulate moral and ethical boundaries that help him embrace his own adulthood.

Jesse also meets Dean (John Magaro) on campus, a student known as brilliant but troubled, who was recently hospitalized because of a “manic” episode.  When Jesse notices Dean reading a hefty paperback in the local coffee shop, they share their admiration for the author (who’s left unnamed but is mostly likely David Foster Wallace, and the book most likely Infinite Jest).  Jesse is as drawn to Dean as he is to Libby, for similar but different reasons, and offers the boy brotherly attention that winds up saving Dean’s life.

As Jesse helps guide Zibby and Dean’s choices, he remains influenced by his own mentors.  Peter is undone by his choice to retire from a school that’s been his privilege and his prison for nearly 40 years.  Another of Jesse’s former professors, Judith Fairfield (a terrifically tart Alison Janney), who transformed him by teaching him Romantic poetry and 18th century British literature, turns out to be embittered by her own career in the isolated small town.  She seduces Jesse at the local bar, brings him home for quick sex, and then immediately boots him out of her bed while she lingers over a scotch and a cigarette.  With Peter and Judith, Radnor deftly draws the pros and cons of small-town college life.

In some ways, Jesse returns to campus as a teacher himself.  When he sees that Libby is reading Twilight for what she insists is just fun, he reads the book himself so that he can persuade her why it’s a terrible waste of her time.  But when Dean tries to kill himself, he prescribes the Twilight series to the re-hospitalized boy, recommending that Dean abandon the post-modern author who committed suicide himself.

Part of the film’s pleasure is the joy Jesse takes in talking about books, music, and poetry.  The skillful script demonstrates how ideas matter for these characters, not in a My Dinner with Andre sort of way, but as a palpable, formative, moving part of their lives.  Jesse, Zibby, and Dean are all looking for models, ways of moving through the world with dignity, love, and respect, and they find inspiration in literature and music.

Radnor draws with affection the contrast between New York, where Jesse moves through crowded, over-stimulating streets with a book opened in his hand, and Ohio, where lush cornfields roll by his rental car and the campus seems to resonate with deep thought.  Radnor creates a full sense of place in Liberal Arts, capturing the quiet beauty of a small college town alongside the bustle of New York.  Scenes between Jesse and Zibby at the college coffee shop and bookstore, in the college chapel, and on the stage in the college theatre all pregnant with the possibilities of young people just starting out their lives.

By the film’s end, Jesse finds a bit of Ohio in New York by dating a clerk at his local bookstore (sweetly, simply played by Elizabeth Reaser) who loves books as much as he does, and who worries that she, too, leads her life through the page more than through her own agency.

Radnor and Olsen perform Jesse and Zibby’s chemistry with warm intimacy and a precise if often unarticulated current of what’s at stake in a relationship neither one of them can really afford to launch, despite how suited they seem for one another.  Olsen is a young actor to watch; her terrific performance in Liberal Arts follows her breakout role in Martha Macy May Marlene (2011), in which she played a young woman brainwashed by a religious cult who manages to break free but can’t quite come to terms with resuming her life.  Her quirky honesty and luminously present performance in MMMM was as filled with palpable, inchoate pain as her work in Liberal Arts is with a determined, intelligent, if still-young power.

I don’t watch How I Met Your Mother, the television show on which Radnor came to fame, and I haven’t seen his first movie, happythankyoumoreplease (2010).  But I found myself enchanted by his hapless, sweet, sincere man-boy performance as Jesse.  I smiled through much of the film, recognizing with my own affection his portrait of campus life in a small liberal arts college.

I also appreciate how the script crafts Jesse’s relationships with other men, from his mentor, Peter, to the melancholic Dean.  Nat (Zac Efron), an enigmatic free spirit given to speaking in aphorisms who Jesse meets wandering across the campus at night, seems a bit off tone.  But Efron and Radnor perform their scenes, too, with casual warmth that models different ways for men to be with one another on screen.

Liberal Arts joins the growing genre of films about sensitive men approaching middle-age who struggle to find their way in a culture that dictates certain versions of white masculine success they can’t (or won’t) emulate.  Jesse reminds me of Jason Segel (who also performs on How I Met Your Mother) in the wonderful indie film Jeff, Who Lives at Home (written and directed by brothers Jay and Mark Duplass) in which Segel plays a mournful, stuck, not-so-young man who lives in his mother’s basement, looking for signs about how he should lead his life.

Jesse and Jeff also remind me of Jack (Mark Duplass) in writer/director Lynn Shelton’s Your Sister’s Sister.  They’re all white straight men approaching the end of their youth who struggle to reject the patriarchal privilege of their race, gender, and class, and who try very hard to figure out what it means to be ethical and good.

Theirs are stories of existential crisis over how men like them might escape the confines of conventional American masculinity.  Radnor’s, Segel’s, and Duplass’s characters try to craft soft, warm-hearted gender performances because they’re so anxious not to be the bad guys.  These films seem born of feminism, and the sensitivity and sweetness of the characters and the screenplays that draw them give me hope for how white straight masculinity can be re-envisioned at the movies.

In the last scene of Liberal Arts, Jesse and Ana (Reaser), his new girlfriend, imagine being old—not necessarily together, although clearly, they’ve found love and affection for one another.  But they imagine themselves and each other, he with a paunch and baggy pants, she with long grey hair worn in a ponytail and lots of wrinkles on her face.  They snuggle together, each within their own imaginings, as the film fades out on a lovely note of comfort in a vision that living until you’re old might in itself be an art.