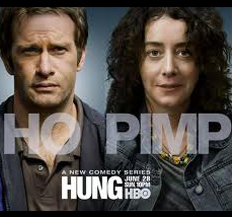 With Nurse Jackie and The Big C on hiatus for now, I’ve returned to Hung on HBO, which is enjoying its third season of social observation through the foibles of a male prostitute and his female pimp.  I’ve also been watching Homeland on Showtime, to see how it unravels its post-9/11 tale of paranoid intrigue.  My viewing is selective, but it does seem that subscription television offers more nuanced women characters than many of those in mainstream films (Bridesmaids aside).  The women in these two series actually grow and change over time, taking advantage of the more capacious narrative potential of episodic TV (see my next post for a discussion of Homeland).

Hung continues to follow the unlikely pairing of Tanya Skagle (Jane Adams) and Ray Drecker (Thomas Jane), a pimp and her prostitute, who use his impressive physical prowess to make a common living.  Although I missed much of Hung’s second season, which is now out on DVD, I’m reminded what fun it is to watch Adam’s hapless but deeply feminist Tanya make her way through the illegal and sexual thickets of pimping out her man to middle-class, middle-aged, and (unfortunately) white women (except for current guest star Ana Ortiz).

Tanya has established a Wellness Center for women where she instructs her acolytes in the fine art of reclaiming their sexuality.  Tanya calls herself a “happiness consultant.”  Rehearsing the “our bodies, ourselves” mantras of 1970s feminist self-help, Tanya invites her students to “know your vulva,” encouraging them toward embracing the power of their sexual identities. 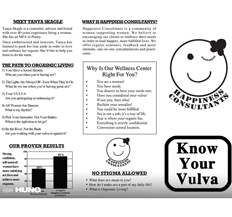 Much of the show’s humor comes from its admixture of feminist sexual activism with capitalist entrepreneurship.  After all, Tanya’s goal is to make a living for herself and Ray, and she’s the first to admit that she’s often out of her league.  But she’s ambitious enough to seek advice from a middle-aged African American male pimp who also becomes her lover.

Hung’s pedigree includes executive producers Alexander Payne (the writer/director of Sideways and the just-released film The Descendants) and Angela Robinson (director alum of The L Word and of the terrific lesbian spy spoof, D.E.B.S.), who help secure its insights into middle-aged men and middle-aged, feminism-informed women.  Created by Dmitry Lipkin and Collette Burson, the show engages the economic dilemmas of middle-class and marginalized people desperate to make ends meet and creative enough to brook convention and taboo.

The show is set in Detroit, although it’s obviously white, suburban Detroit, not the economically devastated, racially diverse, struggling inner city.  But the working class history of the area allows its producers to contemplate the shrinking professional horizons of ordinary people who nonetheless boast a sharp analysis about their right to reap the promised rewards of lauded American enterprise.

Tanya, for example, has an MFA in poetry, and Ray is a high school basketball coach.  That Tanya is also the businesswoman who takes advantage of Ray’s extraordinarily large penis lends the show its feminist angle and much of its humor.  Her face shiny with sweat and anxiety, her hair floating in frantic frizz around her face, Tanya is a smart if inchoate bundle of determination.  In recent episodes, she and Ray face competition from Lenore (Rebecca Creskoff), Tanya’s former would-be business partner, who’s found her own well-endowed stud, Jason (Stephen Amell), and intends to intrude on Tanya’s territory.

And Ray is burdened by the role-playing expectations of Lydia, one of his johns (or would it be janes?), a woman who insists on meeting him in unlikely situations in which she plays cop to his robber.  When it turns out Lydia (Ortiz, late of Ugly Betty) really is a police officer, Tanya and Ray’s business is threatened.  In the last episode I watched, the comedy was acute, but the explanation for Lydia’s outsized desires felt too psychologically lame for a show that’s best when it’s parodic.

Who cares that Lydia’s police officer husband is a brute who regularly frequents his own stable of prostitutes?  Instead of leveling the gendered playing field by suggesting women can be as physically desirous and emotionally detached about sex as men, the episode attributed Lydia’s appetites to a bad relationship.  And Ray freed himself and Tanya from potential arrest by offering Lydia an emotionally sustaining freebie.

But most of the time, Hung keeps its balance and doesn’t fall into sentimentality.  For example, Ray’s ex-wife, Jessica (Anne Heche), has divorced her second husband.  Though she has no apparent work skills, she desperately needs a job, and finds one working for a pompous, self-important doctor with whom she and Ray used to socialize.

When the doctor seduces her, their sex scene shows him moving way too slowly on top of her while crooning lyrics from musical theatre.  Heche’s pitch-perfect reactions to her sexual and emotional boredom fill the screen.  When the doctor unexpectedly visits her at home to reassure her that their liaison won’t jeopardize her job, Heche’s incredulity registers how even men who are sexually and romantically inept still maintain more social and professional power than the women they lord it over.

Likewise, Lenore pressures Jason into working for her and tries to thwart his engagement, which she assumes will be an obstacle.  But when she confronts his fiancée, she’s far from shocked by her future husband’s sexual adventures.  Instead, the young woman bargains with Lenore for the spoils from his extra-curricular work.

Sex, Hung points out, can be a negotiable, even exploitable business relationship instead of a prize kept on the rarefied pedestal of marriage or romance.  This is a plank straight out of feminist sex workers’ platforms; see, for only one example, the activist ideologies of COYOTE, a sex workers’ rights group founded in 1973 by the prostitute Margo St. James.

The small moments that upend stereotypical expectations about sex and sexuality make Hung a series worth watching.  It’s full of smart and funny social observations about the economic and political, as well as the emotional, tolls of gendered sexual interactions.  The casts’ rich performances and the producers’ excellent writing keep it consistently engaging.

Although it’s Ray’s anatomy that keeps their business going, it’s Tanya’s understanding of women’s desires that sells their product.  And the women who buy Ray’s services are somehow always proactive, powerfully in charge of their encounters.  Ray is a good guy in Hung, but he’s objectified in ways that limit his masculine privilege to the power of his member.  He spends much of the series befuddled and bossed around; happily, though he might be a stud, he’s not a patriarch.

Hung tries to do new things with old gender roles.  Take a look.