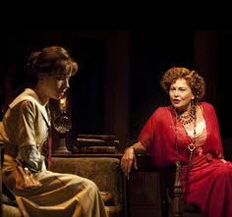 Shaw’s moral drama about sexual hypocrisy and the constraints of gender offers two terrific roles for women and somehow always seems relevant. Shaw embeds his polemic in a story of a singular mother and a strong-willed daughter whose lives stand at cross-purposes. Kitty Warren (played by the eminent Cherry Jones, who I’d hazard to say is one of the best American actors working on stage and screen today), unbeknownst to her daughter, Vivie (the British actress Sally Hawkins, late of Mike Leigh’s film, Happy Go Lucky), is a madam on a grand scale, maintaining “houses” in Brussels, Vienna, and elsewhere around the continent that allows her to fund her daughter’s education and comfortable country life.

When Kitty descends on her daughter’s rural estate with two of her city friends—the dandyish Praed and the opportunistic Sir George Croft—Vivie demands to know more about her enigmatic mother.At the end of the evening, Kitty confesses the history of the straitened circumstances into which she was born, and the lengths to which she and one of her sisters were forced to travel to survive. That Kitty neglects to tell Vivie that the brothels in which she made her way continue to thrive, with Kitty now at their helm, becomes the source of their ultimate, permanent estrangement and undoing.

Doug Hughes directs this production for Roundabout Theatre with confidence and verve, pruning the text and keeping the performers moving at a distinctly contemporary clip. Scott Pask’s beautiful set folds out and back on itself to reveal the garden of Vivian’s country estate and then its wood-paneled interior. The second act’s revelation scene takes place in the garden of the nearby rectory, where the dithering clergyman Samuel Gardner (Michael Siberry) and his wily son, Frank (Adam Driver), fall under the spell of the Warren women in their own ways and for their own mercenary reasons. The set changes here are rather old-fashioned; a “show pause” interrupts Act One and Two, and then Act Three and Four, after intermission, so that the rather realistic set can be transformed, which recalls Shaw’s social realist intent.

In the secluded garden, backing the 13th century church where the far from religiously worthy Rev. Gardner delivers sermons he buys pre-composed, the machinating gentleman Sir George Crofts tries to manipulate Vivie into marrying him. He tells the young woman the truth of her mother’s fortune and intimates the truth of Vivie’s parentage. In the play’s final scene, Vivie has moved permanently to the city, stripping herself of vestigial illusions, vehemently rejecting Frank’s romantic propositions and her mother’s continuing financial support or emotional connection. The small, worn actuarial office in which she works looks claustrophobic, the light from its large windows glaring with harsh and hard reality.

In Hughes’ brisk interpretation, Shaw’s play is by turns a comedy and a scene-chewing melodrama.The humor trades on Praed’s dandyism (delivered with perfect, smug self-possession and posing by Edward Hibbert), Crofts’ paper-thin veneer of probity (well-represented by Mark Harelik), Rev. Gardner’s moral lassitude, and Frank’s oily flirtations. Vivie and Kitty’s relationship carries the melodrama, with Hawkins and Jones ripping through their confrontations with deliciously focused zeal.

As Kitty, Jones is festooned in gowns just short of garish and oversized hats that frame a curly red wig, her chest and arms hung with ornaments. Jones swans about the stage, flaunting Kitty’s nouveau riches. But Kitty’s façade is riddled with holes that Jones reveals when her too grand gestures devolve into slouching postures, and when her purposefully hybrid British accent begins to sound more Cockney than country. Jones plays Kitty as highly performative. She and Hughes chart how her performance of a proper English woman finally flounders on the shoals of Vivie’s distrust, accusation, and rejection.

Hawkins, dismissed in the New York Times by Ben Brantley as miscast, offers what I instead found a compelling interpretation of Vivie’s journey toward knowledge and independence. Hawkins is a small, slight woman. One of the play’s first sight gags has Vivie’s overly firm handshake sending the newly arrived Praed and then Crofts into spasms of surprise and pain. Given Hawkins’ stature, this usually funny, meaningful shtick doesn’t play as clearly. But Hawkins’ size makes her determination to be independent, finally free of emotional, familial, or financial indebtedness, that much more poignant, because you can see how hard she has to work to persuade even herself that she’ll be able to live without Frank’s attentions and her mother’s investment.

Hawkins proves a worthy match for Jones’ Kitty in part because they appear so different physically.Vivie’s dresses are plain and utilitarian (perfectly designed by Catherine Zuber), suitable for a very smart young woman whose life plays out among books and the actuarial tables that she studies for a friend in town. Mrs. Warren’s operatic outfits—and Jones tall and solid stature—let her tower over Vivie, yet finally don’t protect the older woman from the devastation of her only daughter’s rejection.

In their final battle, Hughes and his actors find a distinctly homoerotic tension between the two women, as Kitty describes how she rebuffed the attentions of the girls in her employ, saving her love for the daughter she expected to comfort her in her old age. Vivian’s refusal feels like the struggle toward independence of the pure young mistress who’s been kept on the side in the country while her older lover makes her life among the corruptions of the city.

Although Vivie’s father may or may not be the dissolute Rev. Gardner, Hughes’ production underlines that Kitty is undoubtedly her mother’s daughter. Vivie proclaims that she will never cry or faint; likewise, Kitty is distressed at the thought that she, too, might be seen crying. Jones daubs her brightly painted face with a handkerchief, pushing away the emotion she thinks weakens her.

Hawkins keeps her back straight but allows an array of conflicting emotions to continually cross her face. When she finally shows Kitty the door in the worn, small office to which she’s consigning her future, Vivie asks her mother for one last handshake. Jones nearly growls at her, lurching toward the young woman with her teeth bared. The moment is chilling and right, but only an actor as strong and willing as Jones would be brave enough to play it.

Mrs. Warren’s Profession isn’t exactly a feminist classic, but Shaw’s dramaturgy gives the canon of modern drama two meaty women’s roles among its collection of men who illustrate the moral hypocrisy of his era and our own. When the brutal Crofts tells Vivie the truth about Kitty in a base effort to buy her hand in marriage, he asserts the impossibility of keeping oneself pure in transactions of any kind. That Vivie would be repulsed by her mother’s business, he suggests, demonstrates her naiveté more than a superior morality.

Vivie consigns herself to much reduced circumstances with her high-brow revolt against her mother’s occupation. With Hughes, Hawkins, and the amazing Cherry Jones commanding the story, Kitty and Vivian’s final battle of recrimination, need, and obstinacy plays as a devastating emotional break-up more than the principled stand against immorality as which it’s often staged.

Vivie’s rejection of her mother plays as the self-defeating pride of a young woman pretending that she doesn’t need the parent whose money has supported her but whose absence has destroyed her.Kitty’s final exit punctuates what is here an emotional rather than a moral defeat. Kitty has lost her daughter, but her faith in the necessity and righteousness of her profession is unshaken.

In this production, the play describes a complicated relationship between two women cut from the same cloth, who finally can’t find enough space between them to continue living in the same orbit.But Shaw’s political message resonates nonetheless. Vivie stakes her claim as the unmarried, independent “new woman,” but in Hughes’ interpretation, hers isn’t a victory so much as a rather defiant, compromised choice among a very constrained pair of options. Shaw’s incipient feminism is heightened here by tempering the moral consequences of the play and underlining that given their historical moment, neither woman can truly win.