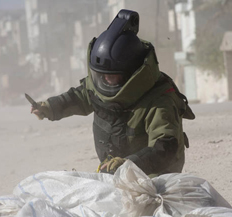 I didn’t see the Academy Awards extravaganza on tv on Sunday night which, I read in the Times, lasted for three-and-a-half hours. But reading the news the next day, I was delighted by several awards: first, that The Hurt Locker won for Best Picture over Avatar; second, that Kathryn Bigelow won as Best Director for The Hurt Locker, the first and only woman in the history of the Oscars to achieve this distinction; and finally, and perhaps surprisingly, that Sandra Bullock won for The Blind Side. I’ll save Bullock for my next post.

The Hurt Locker is a terrific film, made with a combination of guts and sensitivity that can’t be attributed in any superficial way to the gender of its director. I’ve been reading a lot lately about 1970s lesbian feminist “women’s culture” in the U.S., and its essentialist claims about women’s unique emotional understandings, their pacificism, and their prized connection to nature. I’m finding that these exaggerated claims were usually more tempered than history has made them sound; many1970s feminists were just trying to stake claims for women in a political context in which their social and cultural contributions had been dismissed and ignored.

Carving out separate space and insisting on women’s differences from men seemed, in the 70s, a useful activist strategy, and it promoted a range of cultural production that I’m hoping reconsider. But 1970s cultural feminists would no doubt have disparaged Bigelow’s work in The Hurt Locker, tarring it with the sticky brush of “male identification.”

But in 2010, it’s still not surprising that the first woman to receive the Best Director award won it for a film about war. But Bigelow’s film addresses not just war’s brutality, but its seductions, the adrenalin rush it can deliver, and the insidious, chaotic way it makes lives meaningful.

Staff Sergeant William James (Jeremy Renner, nominated but passed over for Best Actor) spends the war in Iraq wandering the ravaged countryside defusing bombs. He’s part of a three-man team traveling together in an armored vehicle, but he’s the one who puts on the suit that’s meant to protect him from the bombs he proceeds to dismantle by hand.

The puffy, full-body suit and the helmet that encases his head makes James look like an astronaut space-walking across the desert. Bigelow brings her camera close to Renner’s face as he moves laboriously toward bomb sites, so that you can see the sweat slicking his skin and hear him talking to himself and his partners as he trundles awkwardly toward what might very well be his own death.

The nonchalance and defiance with which he confronts his job’s danger make James gripping to watch. He’s also a renegade who makes his own decisions and often refuses to follow the protocol his superior, Sergeant JT Sanborn (Anthony Mackie), shouts at him through his headset. James is as unpredictable as the bombs he sets out to defuse.

Bigelow brings the film a stunning tension that electrifies each scene. Even when the soldiers aren’t racing over dusty Iraqi streets, past burned out storefronts and shells of apartment buildings toward buried munitions, The Hurt Locker keeps you wary, suspicious, and watching for the unexpected.

The soldiers see peril where the audience’s untrained eyes don’t. For example, as James dons the heavy suit and walks toward the center of a town where a bomb has been discovered, Sanborn surveys the scene with binoculars, and sees an Iraqi man with a cell phone in his hand.

Before we understand what this means, he’s screaming, “He’s got a cell phone, he’s got a cell phone!” The other American soldiers try to find and shoot the man before he can activate the bomb. The most minute, imperceptible actions signal danger; the fact that the audience can’t read these signs makes every moment of the film anxious.

Bigelow nuances our vicarious understanding of how soldiers’ actions can be intensely intimate and personal or completely distanced and removed. In another scene, James, Sanborn, and Specialist Owen Eldridge (Brian Geraghty), their naïve young teammate, are caught by snipers as they cross an abandoned stretch of deserted desert countryside. Leaping out of their Humvee, the three soldiers roll into position against a hillock that offers a vantage point from which they can barely see their assailants off in the distance.

Even with binoculars and telescopic rifle sights, it’s difficult for them to target the men, who occupy an abandoned structure that sits what might be miles away. Bigelow frames our view through James’s binoculars or Sanborn’s rifle sight, but we still can’t really make out what they see. James directs Sanborn’s aim, and as Sanborn squeezes the rifle’s trigger, time attenuates. The bullets seem to travel very slowly over the long distance to their marks.

When the bullets finally reach the anonymous Iraqis, their features blurred by distance, they fall silently. But the relationship between cause (the shooting) and effect (the dying) seems tenuous and surreal. It’s difficult to draw a connection between the American soldiers’ actions and the Iraqi men’s crumpling bodies, making the scene almost phantasmagorical in how Bigelow constructs the relationship between the action and the thing it does. When we see someone shot in a film, they usually buck from the force and instantly fall over dead. Here, we watch the unpredictable but inexorable passage of time between aim and destiny, and these long moments feel disquietingly real.

The sniper scene is also remarkable for how patiently Bigelow waits in the moment. It’s not clear how long James and Sanborn sit in their positions against the low rise, surveying the enemy. The light changes imperceptibly as they watch, barely moving. Sanborn sights through his weapon as flies land in his eyebrows. They talk quietly, not facing one another, keeping their eyes on the horizon.

Long after it seems they’ve killed all the snipers, James and Sanborn wait, searching for movement, determined to outlast anyone who might be calculating their last opportunity to strike. The excruciating but simply constructed scene demonstrates the men’s vulnerability as well as the boredom they endure to protect themselves and to outwit their enemy.

In another unforgettable moment, the team is called to an open town square where a suicide bomber balks and pleads to be spared from the fate he chose. James and Sanborn approach warily, assessing whether the man just intends to trick them into coming closer. Again, Bigelow puts the audience within the soldiers’ emotional turmoil, keeping her camera back with the vehicle as James and Sanborn try to judge the danger, then moving toward the overwrought Iraqi as James puts on the suit and approaches.

We arrive with James to find the man trussed up as a human time bomb. The dynamite strapped against his chest attaches to a clock ticking off the minutes and seconds until it explodes. A metal cage encases the whole apparatus, padlocked against just the kind of second thoughts the would-be suicide bomber now experiences.

Here, unlike in the sniper scene, Bigelow gets intimate with the effects of war. James realizes he can’t defuse the bomb in time, and instead tries to free the man from his death trap. Ripping off his helmet and visor, he insists Sanborn bring him tools, and works mightily to release the Iraqi. But as the seconds tick down, James realizes his attempt is futile; he doesn’t have time to cut through the cage. He looks into the poor man’s eyes, entreating him to understand, in a language he doesn’t speak, James’s sorrow over not being able to save him. “I’m sorry, I’m sorry,” he repeats, knowing his face is the last this hysterical, doomed fellow human being will ever see. Then he runs, with seconds left to save himself.

The dynamite ignites as James hustles away, its force lifting him off the ground and throwing him from the tornado of fire, dust, and body parts it hurls through the air. The ambivalent Iraqi’s death is palpable, as we’re left imagining in vivid detail his body exploding like an overripe piece of fruit dropped from a high table. The moment’s intimacy depicts the flip side of war; looking a soon-to-be-dead man in the eyes and trying to release his body from its fate is a far cry from the remote, clinical rifle work necessary to execute men so far away their humanity is abstracted.

Bigelow’s feel for how war changes register and key is also apparent in how she draws the soldiers’ relationships in The Hurt Locker. Sanborn and James warily paw the ground around one another, knowing they’re forced to trust the other man with their lives. Their situation requires machismo they both know is only fabricated. In one of Mackie’s finest moments—in an excellent performance overlooked by the Academy—Sanborn asks James if he thinks Sanborn would ever be brave enough to put on the suit.

From the timid, embarrassed hopefulness with which he poses the question, Mackie demonstrates that Sanborn isn’t made of the necessary stuff. But James’s generous reassurance that Sanborn, too, could do the work, underlines that the only thing separating the two men is their essential level of regard for their own lives.

The Hurt Locker is paced by titles that count down the days until the men’s unit leaves Iraq, markers that also increase the tension by playing on the audience’s expectation that something will go wrong and they won’t make it out alive. But James and Sanborn do decamp. We soon see James at home, months later, his hair grown longer, domesticated by his girlfriend (Evangeline Lilly). They shop at a supermarket, where the array of colors and the variety of textures contrasts with the rest of the film’s limited visual palette, in which khaki-clad soldiers crawl over dun-colored land bleached by harsh sunlight.

But James rests lightly at home. He smokes and stares out the window, held static by a world that comes at him with slow predictability. Before long, he’s back in uniform, marching out of the belly of a transport plane that delivers him back to Iraq and a war to which he’s clearly addicted. A chilling half-smile plays on his face as he leaves the plane; James is an adrenalin junky anticipating his next fix.

The Hurt Locker is a terrific anti-war film, in part because it never overtly criticizes the conflict’s politics. It tallies the war’s effects in human costs, not by counting the dead, but by chronicling in quotidian, disturbing ways what war does to the living.

4 thoughts on “The Hurt Locker”