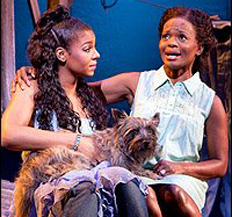 City Center’s Encores! series has recently extended its season of staged readings of rarely revived musicals into the summer, outside of its typical three-show run in the spring. Two years ago, a summer remount of Gypsy triumphed with Patti LuPone in the lead, in a production directed by Arthur Laurents that went on to garner multiple Tony Awards during its subsequent Broadway run.

Hopefully, their latest summer production, a revival of The Wiz, will have the pleasure of a similar fate, despite Charles Isherwood’s less than charitable review in the Times. Directed by the talented Thomas Kail, who also directed In the Heights, musical directed by Alex Lacamoire (who also did In the Heights), and choreographed by Andy Blankenbuehler (currently represented on Broadway by 9 to 5), the production teems with talent and energy, offering a dazzling evening of great fun from a talented, infectiously delighted cast.

Even though the show was first produced in the 1975, this production didn’t smell a whiff out of date. Some of the language, on closer scrutiny, might seem anachronistic. A few bon mots suspiciously close to “here comes the Judge” are rattled off by an earnest cast that’s fully behind them, never pausing for a moment to be suspicious or snobby about the phrasing’s provenance (this despite the fact that many of the cast probably weren’t alive in the 70s).

Kail, himself a young Wesleyan University graduate, puts his shoulder behind the music and the dialogue, creating a fast-paced romp from Kansas to Oz in a musical retelling of the classic story with an African American spin that stamps the music with an erstwhile Motown idiom.

Perhaps because it was first produced in the 70s, when feminism was very much in the air, women dominate the musical. Ashanti, the Grammy Award-winning pop singer, plays Dorothy, and LaChanze matches her fame in the double role of Auntie Em and Glinda, the Good Witch of the South. The show’s best numbers are sung by these two and the supporting women. Dawnn Lewis plays Addaperle, the Good Witch of the North, the first to meet Dorothy in Oz. She enters decked out in denim dotted with colorful patchwork quilt accents, wearing tall hats stacked on top of each other and horizontal striped stockings that somehow elongate legs that already tower on platform shoes.

Addaperle’s number, “He’s the Wizard,” promises that Dorothy will find her way home with his assistance, which begins her quest. But since we know the story, it’s the song’s delivery, and Lewis’s interpretation of Addaperle as sweet, well-meant, but addled that makes the number such fun. (Like a failed student at Hogworth’s, she can’t get her wand to work.)

Paul Tazewell’s imaginative, campy costume design—along with the hair and wig design by Charles G. Lapointe and makeup design by Cookie Jordan—distinguishes all the characters in this production, and provides much of the evening’s fun.

Evillene, the Wicked Witch of the West (Tichina Arnold) also sings a show-stopping number, for which she dons the fabulously red, richly textured and layered outfit of a modern-day devil, wearing a tight-fitting body suit in a red and black paisley print, over which she pulls a hoop skirt, half covered with a fringey dress, topped by a red and black wig styled in long curly dreads. The whole campy effect gives her a devil-may-care-if-I’m-a-devil attitude thatArnold delivers with energetic panache. Her song, “No Bad News,” forbids anyone in her court to tell her anything she doesn’t want to hear, which eventually means the flunky who announces Dorothy’s arrival meets a comically bad end.

LaChanze has the pleasure of the first and the penultimate number in The Wiz, first as Auntie Em, singing a maternal ode to her niece as she hangs laundry on the clothesline while that foreboding wind kicks up. Even wearing Auntie Em’s shapeless housedress, LaChanze is a riveting presence with the best voice in the cast. When she returns as Glinda, wearing a diaphanous sky-blue gown with a silken turban wrapped around her head, LaChanze is luminous, glowing with the promise that if Dorothy believes in herself (as Glinda’s song goes), she’ll get home to Kansas and control her own destiny. LaChanze puts over the anthem to 1970s-style self-actualization like she’s announcing the one true religion. How can Dorothy not get back to Kansas, given LaChanze’s faith-full notes?

Ashanti is the production’s weakest link, but then, Dorothy isn’t the most interesting character in The Wiz. After she’s displaced by the tornado—which happily, Kail doesn’t try to reconceptualize by referring to Hurricane Katrina or any other available current event—Dorothy arrives in Oz, where she mostly reacts with either wonder or dismay at its marvels.The role is one long reaction, and Ashanti’s expressions shift—or not—accordingly. But her responses seem practiced, rather than spontaneous; her face looks stiff and too carefully arranged.

She’s cute and earnest but bland, and lacks that glowing musical theatre-person presence that her co-stars exude. Ashanti acts like the pop singer she is, a girl who’s accustomed to being technologically mediated and much more amped up than she is here. Ashanti’s voice, though, is gorgeous, and she gets her songs’ tone and spirit just right. She’s also a very game; for some reason, she doesn’t dance, but she’s happily led around the stage by chorus boys and girls, and vamps in place with the other characters.

Ashanti is also the lightest skinned person on stage, whatever that might mean to the politics of race, which this production downplays. Since no white characters appear in The Wiz, the African American characters and cast create a world in which their race is the norm and goes without comment. Ashanti stands out in this context, although perhaps her exceptionalism makes sense for Dorothy, who is indeed different in Oz.

Ashanti never gets in the way, but she never stands up to the sparkle and shine of the other performers. She’s upstaged by each new character Dorothy meets. The Scarecrow, the Tinman, and the Lion each get their own tour-de-force number, which they put over with skillful aplomb. Christian Dante White is all floppy limbs as the Scarecrow, in a wonderfully physical and relaxed performance. Joshua Henry, as the Tinman, taps his heart out for his “Slide Some Oil to Me” solo. James Monroe Iglehart, as the Lion, is a big teddy bear of a performer, who inhabits his furry suit with the appropriate aw-shucks charm. Iglehart manages to wrangle a bit of heart from Ashanti, who seems to enjoy his company. Warmth radiates between them that doesn’t spark between the lead and her other co-stars.

Orlando Jones, as the Wiz himself, is intermittently effective, handsome in his bedazzled emerald coat and fantasy make-up when the wizard deploys shock and awe, and later, unapologetically matter-of-fact about his fall from power. He’s charming at the end as he goes about solving everyone’s problems, making each of the principles happy but Dorothy, whom he leaves on the ground as his hot air balloon takes off (or here, is blown sideways offstage) without her.

Dorothy doesn’t return to Kansas at the end of The Wiz to reveal the real-life identities of all her Oz friends. Instead, she sings “Home,” gesturing toward a happy end to her journey, and the curtain rings down. Perhaps because Ashanti can’t quite fill the moment emotionally, the ending feels a bit inconclusive.

But these minor defects don’t mar what’s otherwise an entertaining evening.Blankenbuehler’s terrific choreography evokes the story’s high drama. The black-clad dancers embody the tornado in a stunning coup-de-theatre. They fly about t he stage, putting their arms through the shirts hanging on Auntie Em’s line and wreaking havoc with her house. The set, designed by David Korins, comes apart creatively; the dancers create the damage of gusting winds by uprooting each piece of the house and planting them in odd parts of the stage, as if the weather explodes Dorothy’s home into its constituent parts.

The dancers’ choreography accomplishes many of the set changes. They create the yellow-brick road by appearing with small suitcases painted in a brick-like pattern that they put together like blocks, passing them under the feet of the actors as they “ease on down the road” to Oz. Dancers comprise the dangerous poppy field, twirling around the principles in form-fitting green sheaths and wearing bright red fright wigs.

As the munchkins, they sit on rolling chairs that halve their height, and wear hoop-skirt costumes that cover their bodies from chin to toe, while extravagant Koosh-ball shower caps adorn their heads. The flying monkeys, who get a kind of Michael Jackson Thrillertreatment, threaten the company with their sinister moves.

And Toto, of course, is adorable.

The audience loved the high energy production the night I attended (a preview performance on 6/13/09). In the Bush years, the failed wizard might have been reminiscent of W., with his empty insistence on missions accomplished, and the sham promises of a few last left-over miracles that never transpire. But by this production’s end, the Wiz sounds more like Obama as he delivers his gentle, yes-you-can moral, the everything-you-need-is-within-yourself boosterism on which The Wiz, like The Wizard of Oz before it, stakes its happy ever after claim.

In a production like this one, though, watching the talented ensemble tell the old story, the moral feels a lot more like yes-WE-can. That works for me.