I have to admit that I rarely find that exuberant, affirming, utopian performative feeling I always hope for when I plan my theatre-going.  But the wish that I will keeps me buying tickets, and my desire to feel the electricity of common and hope-filled experience keeps me going to see live performance.  More often than not, I’m disappointed.

Not last week, when I caught the last performance of Monica Bill Barnes, Amy Bass, and Ira Glass’s whimsical, thoughtful, and thrilling performance at Town Hall.  The threesome—two dancers and a radio host—have toured this show on and off for the last year, and will continue to travel now that their hometown run has ended.  The evening, though, feels as spontaneous and extemporaneous as many of Glass’s radio hours, a casual but surprisingly profound and enormously satisfying tour through the ordinary in the most extraordinary way.

Barnes choreographs the trio, embracing Glass into her long-standing duet with Bass.  The two women are terrific, athletic dancers, who enact their movement mostly in unison in a presentational, open, rhythmic style that makes them appealing—even riveting—to watch.  Their chemistry keeps you watching closely; Barnes and Bass are obviously in sync, but their facial expressions, their address to the audience, and their, well, acting, all contrast amusingly.  Their subtle on-stage competition is partly the subject of a hilarious interview Glass did with Bass about what she and Barnes think about when they’re dancing.  Their conversation is, of course, played during the show, as Bass and Barnes dance.

Of the two, Barnes is more muscular and angular.  Bass follows her step for step, but her performance style is just a bit softer, and that much more wry and sardonic.  As they move through the show’s various moods—it’s presented in three acts that more or less chart beginnings, middles, and ends of love and life—the range of their performance relationship becomes more and more impressive.

Into their midst strides the very tall, thin, and physically awkward Ira Glass.  Part of the evening’s pleasure is witnessing his game and sometimes successful effort to switch idioms, to leave his head and his voice behind and perform with his loose and gangly limbs.  Despite his graying hair and stories from and about decades of his acclaimed radio show, This American Life, Glass seems like a teenager onstage.  He’s charming, diffident, and pleasantly unformed on the occasions when he follows Barnes and Bass through their routine with simplified movements.  But his willingness—to dance and to make a happy fool of himself—is heartfelt and thrilling and fun.

Glass’s fame and reach brings the audience to Town Hall.  This is where he first performed his show live, in the mid-90s, and the New York crowd adores him.  He begins the evening by carrying on an old, large, Samsonite suitcase (I think my parents had the same one in the 60s and 70s), from which he unpacks a modified music stand that he screws together while we watch.  The stand is heavy and solid; its heft gives Glass a podium from which to both mock his own presence in a live performance and to wield the whimsical authority that he plies on his show.

Throughout the performance, he reads from a text visible on the stand, but speaks in a way that feels improvised.  And he works the sound cues from a small tablet that he operates like an orchestra conductor.  The podium and his tech apparatus remind us that his stock in trade is speaking, pondering, and wondering, typically while sitting at a microphone playing stories and interviews with others.  (A very sweet moment in the piece describes how, as a very shy middle-school kid, Glass learned to deflect fearful intimacies by peppering people with questions that later became foundational to his career.)

Because Barnes and Bass use their movement vocabulary to illustrate, comment on, and contrast Glass’s stories and the music with which he underscores them, the performance offers a range of interpretive possibilities, languages, and experiences that happily, vividly collide all evening.  A post-modern meta-commentary frames the piece but doesn’t prevent it from being earnest and sincere.

The show, in fact, starts in the dark, as Barnes and Glass discuss for our amusement whether to begin with voices or bodies, with ideas or gestures.  Throughout, the “experiment,” as the artists call it, calls attention to its strategies, from the Brechtian/vaudevillian announcement of the three acts, paraded across the stage on poster-boards; to the frame-within-the-frame provided by the small, curtained proscenium through which the dancers appear in most of the first two acts; to Glass’s manipulation of the sound and stories and the interplay of his live voice and the dancers’ live bodies with their recorded voices and those of others throughout the narrative. 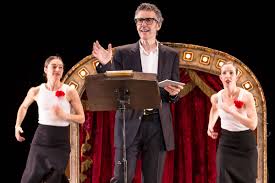 Those stories are sometimes poignant, often funny, and always moving examples of people’s foibles and fears.  Stories of a middle-school dance, for which Glass interviewed preteens, contrast with six adult audience volunteers who Barnes and Bass draw from their seats to perform the awkward slow dances most of us remember from the transformed gymnasiums of our youth.  A funny story about a corporate marketer who interacts with the wife he adores as though he’s a brand he’s trying to sell her contrasts with Glass’s interview with a poet laureate who writes about the death of his beloved wife.  Barnes and Bass accompany that interview and his poems by dancing precariously on a kitchen table set with dishes, supporting one another, catching one another as they each almost fall, holding one another as we learn that the poet’s wife can no longer speak, and as her eyes say her goodbyes.

The first story told and danced in the show is a hilarious, apt tale about a group of dancers performing in Riverdance who are certain they’re going to collectively win the lottery if they just have enough faith in their number.  Glass describes how the night of the drawing, they put on an electric performance, charged with their own determination to make their dream real.  They of course don’t win the lottery, and the next night, their performance, they think, drips with the sorrow of their bad luck.  But the audience, both nights, loves the show just the same.  The story demonstrates both the magic of a performance that works and the vast differences in experience between those laboring on stage and those consuming their work in the audience.  Listening to the story about dancers laboring and believing, while watching Barnes and Bass and Glass working hard in front of us, with such grace and faith, kicked me high into the moment’s utopian performativity.

I’m so glad I caught this evening (brilliantly lit by our Princeton colleague, Tony-nominated lighting designer Jane Cox, in a theatre that’s better used for public interviews and panel discussions than it is for real performance).  Listening to Glass’s This American Life is more often a singular experience; I catch it while I’m pulling weeds or driving, and I let his voice and the stories he curates transport me privately.  Being part of the enthralled audience at Town Hall, enjoying Glass but also Barnes and Bass’s vital and engaging presences, was just a delightful 90 minutes of community pleasure that confirmed the precarious, whimsical, sweet and sad, funny and poignant progress of our lives.  See this show wherever and however you can–touring dates are listed at the link below.