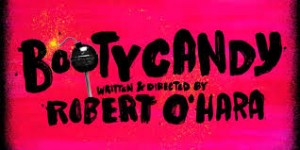 Kudos as usual to Playwrights Horizons for taking risks on another new play written by someone who’s not a straight white male.  Robert O’Hara’s Bootcandy, produced last season in Philadelphia by the Wilma Theatre, follows in the tradition of George C. Wolfe’s The Colored Museum  (1986) as a satirical, revue-format commentary on African American mores and community, this time from the resolute and ribald perspective of a young gay man.

O’Hara places each scene—presented in lively detail by set designer Clint Ramos—in an ideologically rich and redolent social structure.  In the first, O’Hara’s stand-in, Sutter (Phillip James Brannon), is instructed by his mother (Jessica Frances Dukes) in the appropriate ways to talk about sexual parts and activities.  Blow-job?  Look it up in the dictionary, she tells her guileless young son.  Your privates?  We call them “booty candy.”  Why?  Because I’m the mother and I said so.  This funny scene of parental reluctance to respond honestly to innocent childish questions sets the pattern, as Sutter’s family refuses to look straight on (as it were) at his evolving gay identity.

As the turntable on Playwrights’ small stage revolves, O’Hara offers a closeted preacher responding to an anonymous letter from congregants decrying the effeminate behavior of several choir members.  As he rails against such narrow judgments, Reverend Benson (Lance Coadie Williams) becomes more flamboyant in his own gender performance, eventually ditching his priestly robes for red high heels, a gold lame gown, and a flouncy white wig.

Other such broad impersonations follow in quick succession.  Four neighbors gossip on the phone about a woman who intends to name her child “Genitalia.”  The scene is accomplished by two actresses in a Charles Ludlam-esque double-portrait, in which each performer’s costume, make-up, and wig is split down the middle of her body, so that she appears to be the other character when she turns her opposite side to the audience.

In another, a condescending, ill-informed white moderator solicits opinions from black playwrights on a panel discussion about their work.  Several scenes take place at a gay bar, where closeted white men cruise queer black men.  In another scene, on a romantic beach, the now adult Genitalia and her female partner, Intifada, perform a “non-commitment” ceremony to end their relationship.

All of these scenes are amusing, sometimes even outrageously so, in refreshing, theatrically unfettered and socially critical ways.  But in addition to writing the play, O’Hara directs this production, which lets an outside eye go missing.  Most of the vignettes—each announced by a supertitle written over the stage—last about a third too long.  Each funny idea runs successively out of steam.  Pruning and shaping would enhance their theatrical and critical zing.

The gay bar scenes are inexplicably mean-spirited.  In one, Sutter’s closeted white brother-in-law comes on to him and they exchange graphic plans for their sexual encounters.  In another, a closeted white gay man approaches Sutter and his drag-dressed friend, Larry, asking them to sexually humiliate him.  It’s unclear why Sutter trucks with these people, although O’Hara intimates that he enjoys having power over them.  But the stakes in those scenes are murky, and dramaturgically, they don’t quite fit the rest of the narrative.  Likewise, Genitalia and Intifada’s divorce ceremony is baggy and tossed-off, the laughs misbegotten and fleeting.

The characters (and the performers who play them) recur across scenes in ways that knit Sutter’s childhood and adult life together nicely, but the pleasure of those connections comes mostly from the virtuosic actors.  Brannon plays Sutter at various ages with heart, elegance, and good humor.  Williams brings a tour-de-force of gender performativity, playing Sutter’s gruff, hetero-enforcing stepfather as convincingly as he plays Sutter’s feminine gay friend Larry, the closeted preacher, and Sutter’s elderly grandmother.  Dukes and Benja Kay Thomas, who plays Sutter’s mother later in her life and performs as the unfortunate butch, Genitalia, are also terrific across their multiple roles, demonstrating hilarious and instructive ways to perform race and gender.

Bootycandy has the potential to sit alongside The Colored Museum and early work by Pomo Afro Homos—the African American gay male collective of the 1990s that produced similarly satirical, politically poignant performance—in the annals of successful race, gender, and sexuality parodies.  The self-reflexive meta-commentary O’Hara threads throughout implies that he wants to implicate the audience.  For instance, the pompous white moderator leads the panel discussion on the stage apron, under a projection that says “Playwrights Horizons.”  And several times, the characters/actors leave the stage with their eyebrows raised and their eyes cut at the audience, as if to say, “Don’t think you’re immune from this criticism, folks.”  But those moments now seem more confusing than challenging.

The play needs dramaturgical work to shape it into a more incisive, confrontational piece.  I’ll look forward to its future iterations, as Bootycandy has lots of potential as a funny, sharp social critique.