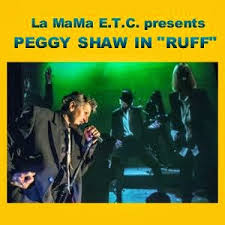 Peggy Shaw’s latest solo show, Ruff, explores with brutal honesty and frank clarity the physical and emotional costs of surviving a stroke.  Shaw says her 2011 stroke felt as though an icicle was falling into the ocean-bottom of her mind.  She didn’t know, at the time, what was happening to her; she thought her world was tilting, perhaps as payback for the perceived sins of her life.  Just let me get through this, she reports thinking, and she’ll give up coffee, “get gay married,” pay market-rate rent in New York, take anti-depressants, stop wearing skinny jeans, and do “right” all the things that a gender renegade like Shaw has refused to do all her life.  If only she can survive the stroke.  (See a video of this part of the performance, which Shaw staged for The New York Times, here.)

Happily, survive she does, though the physical toll is steep.  As the performance begins, she tells us that she coughs now—but not to worry, and don’t offer her water, please.  Sucking on something will soothe the cough.  Later on, she admits she lied, and finds a bottle of water to drink.  She also calls attention to the three large monitors that share the small, narrow stage space at LaMama with her, on which her script is written.  Even so, she sometimes gets lost in a moment, and reminds us again not to worry, that she’ll find her way back and through. 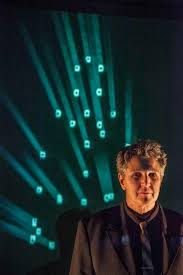 And again, she does, telling us an elegiac story of nostalgia and loss, of mortality and survival.  As the doyenne of the downtown lesbian/feminist/trans/butch performance scene for the last 45 years, Shaw is a consummate master on stage.  She still brings her charismatic self out into the audience to chat and flirt, but Ruff is prompted by a more urgent need to share what she’s learned about her brain and its vulnerabilities.  She tells us to remember the acronym F.A.S.T., and asks us to follow along as she demonstrates how to recognize the symptoms of stroke:  Does the person’s Face droop when they smile?  If you ask them to lift their Arms, does one drift downwards?  Is the person’s Speech slurred when they talk?  If so, it’s Time to call an ambulance.  Shaw proudly shares this newly learned list of signs; when she had her stroke, she just thought she was suffering some sort of biblical punishment.

Shaw’s long-time artistic partner, Lois Weaver, directs Ruff with a light touch, grounding the performance in a matter-of-fact style and structure.  Shaw’s monologue is backed by a video-taped band of women musicians, including Vivian Stoll, Shaw’s frequent musical collaborator, who plays the drums; Ellie Covan, the impresario of Dixon Place, who plays her accordion; and the lovely Sharon Jane Smith, one of the original WOW Café performers, who plays a guitar.  They provide musical accompaniment and counterpoint and basic punctuation to her tale as they gather on the screen behind Shaw.

I missed seeing Shaw interact with live musicians; she and Stoll are always warm and sweet together, and Stoll’s live drum stylings bring rhythm and texture to Shaw’s performances.  But there’s something compelling about the ghostly, disembodied, filmed appearance of the band in Ruff that nicely underlines Shaw’s themes.  A stroke takes something away; it produces a kind of gauze between reality and experience.  It reminds you that your mind is an archive in which the boxes aren’t necessarily acid-free.  Memory becomes both sustaining and corrosive and the future looks a little tenuous and remote.

But the stalwart Shaw marshals her vital life force and continues, in the performance environment in which she thrives.  At 69-years-old, she’s a butch/lesbian/feminist/trans icon, an activist with an ever-keen eye on social inequality, and a fierce warrior against the depredations of our culture and the deterioration of the mind.  She’s an inspiration. 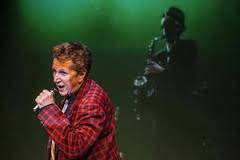 1 thought on “Peggy Shaw in Ruff”