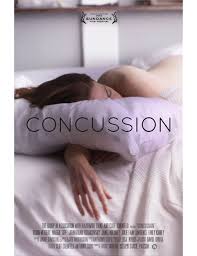 It used to be that lesbian films—that peculiar underground brand made by and about and for lesbians, though not necessarily starring them—were sordid affairs.  The subcultural economy for flicks like Claire of the Moon (1992) and Desert Hearts (1985) was small enough to keep production values low and distribution networks more a whispering project than a marketing strategy.

Now, with formats like Netflix regularly programming gay and lesbian fare and with delivery arms like Wolfe Video, an on-line source that sells DVDs and streams LGBT films, what were once poorly shot and haphazardly edited films with low-grade narratives and a lot of unconvincing-looking sex have bumped up more than a notch.

Concussion illustrates the new brand of lesbian films, a Sundance-acclaimed indie that follows in the heels of the more mainstream The Kids are All Right (2010) by casting lesser-known actors to tell a messier, less complacent domestic story.  The wonderful, expressive Robin Weigert stars as Abby, a lesbian stay-at-home wife whose better half, Kate (Julie Fain Lawrence), is a lawyer without the energy or inclination to satisfy her spouse’s sexual desire.  Drawn from desperation to pay for sex, Abby realizes that she’s as good at giving as she is at receiving, and decides to hire out as a same-sex escort.

Although the plot sounds prurient, part of what’s intriguing about writer-director Stacie Passon’s story is that Abby is smart and canny and sexually appealing, and that the story makes sober sense.  At the film’s start, she’s clearly feeling stifled and hemmed in by her domestic responsibilities for two children—a 10-year-old boy who starts the film by hitting her in the head with a ball hard enough to send her to the emergency room, and a six-year-old girl whose anxieties tend toward memorizing a few lines about the Dominican Republic for her grade school social studies presentation.  Abby loves her kids and Kate, but she’s bored by the routine and by how domesticity has tamped down her sexuality.

When she returns to work flipping apartments in New York, her renovation partner, Justin (Jonathan Tchaikovsky), turns her on to a female escort service run by his girlfriend, a character wittily called “The Girl” (Emily Kinney), who turns out to be a very young law student worried about getting caught trafficking in prostitutes and foreshortening her own legal career.  That Justin connects Abby with The Girl on a lark becomes consternating for him when Abby turns out to like these hook-ups.

Justin’s moralizing about her sex work becomes one of the many voices of an ethically hypocritical mainstream culture in which Abby puts little stock.  From a young college girl who’s never had sex before to a middle-aged woman (Laila Robins, lovely as Woman #3) whose husband doesn’t satisfy her, Abby builds a client base of women she treats with sexual abandon and emotional precision, listening to their stories and becoming their therapist as much as their lady of the night.  Passon engages the joy with which Abby listens, focusing in on Weigert’s open, attentive, empathic face as her clients talk, the two of them wrapped in sheets post-coitus with all the intimacy of lovers instead of those transacting business.

Part of Passon’s point, in fact, seems to be that women’s desire deserves to be met, in whatever ways make sense.  In an interesting narrative choice, Abby and Kate’s friends are mostly straight couples.  Abby works out at the gym with women in heterosexual marriages whose pleasures and frustrations aren’t very different from hers.  They’re all “moms,” as she explains in a scene in a supermarket, women whose lots are thrown together by their children’s proximity, rather than by their own choice.

Passon seems to question whether a lesbian marriage is different from any other.  While Lisa Cholodenko, director of the path-breaking The Kids are All Right, insisted on same-sex marriages’ similarity to heterosexual ones at a moment before gay marriage was even as widely accepted as it is today (which is to say not as much as it should be, but we’re getting there), Passon goes further by suggesting that lesbian marriages can be just as screwed up as any other.  Aside from their children and their home, it’s never quite clear what keeps Abby and Kate together, given how constrained Abby feels by a life that seems so circumscribed and routine.

Concussion proposes that fulfilling desire outside of marriage might do the trick, even if (or especially if) it’s satisfied in the vaguely illicit terms of affairs and sex-for-pay.  When “Sam” (Maggie Siff), one of the neighborhood moms whose eye Abby has caught at the gym on more than one occasion, contrives to hire her services, their torrid if contracted affair threatens to spill over into their real lives.  Abby has an orgasm when they have sex, surprising Sam, who thinks that’s against the rules.

When Abby spots Sam in the local market flirting affectionately with her husband, from whom she’s supposed to be separated, she can’t resist approaching her to check out the terms of Sam’s heterosexual partnership.  After Abby’s secret work life is inevitably and messily revealed, Sam walks her dog by Abby’s driveway and the two women intimate that they’ll keep seeing one another, surviving the banality of their daily domestic lives by continuing the intense, secretive sex that gives them both something to look forward to in between carpooling kids and scooping dog poop.

Weigert brings warm intelligence to her performance as Abby, and a lithe, lean sexual energy that’s unselfconscious and persuasive.  Abby announces wryly at one point that she’s 43-years-old; indeed, part of the film’s poignancy is that it concerns a lesbian of a certain age, one who’s testing what she can and can’t give up to secure a family life that has its own pleasures and comforts.  Concussion isn’t a story about coming out or being in your 20s and figuring out where your passions lie.  It’s about being hit in the head and realizing that you have to lie down for a while to protect yourself, while your brain (and perhaps your heart) has a chance to heal.  It’s about learning how to recover from the blow to the head that “real married life” sometimes represents and thriving in the aftermath.

Passon films Weigert with sympathy and respect, never indulging in what might be voyeurism.  Some of her shots are framed like French feminist filmmaker Chantal Akerman’s in Jeanne Dielman (1975), her famous, nearly silent film about a woman who turns tricks with men in her home.  Akerman’s film treads similar territory, but nearly 40 years ago, she could only see her prostitute heroine through the gauze of melancholy and domestic despair.  Passon sees more pleasure and potential in Abby’s exploits.  Akerman studies her character from a dispassionate distance, through doorways that frame her acts of quotidian domestic and professional preparation.  Even the sex she has is clinical, as Akerman’s camera focuses on her suffering the men who mount her body.  Passon might borrow some of Akerman’s framings, watching Abby through long or medium shots as she makes her own preparations for her home life and sex work, but Passon brings us closer to Abby’s physical and emotional feelings, as she experiments with the boundaries of where she’ll take her own passions.

Concussion also quotes Susan Glaspell’s classic feminist play, Trifles, in which two neighborhood women visit another’s home after she supposedly kills her husband, and can read off the surface of the scene the turbulent unhappiness of their friend’s life.  In Concussion, when Kate visits the newly renovated New York flat where Abby has been entertaining her clients, she, too, understands by studying the space that her wife has been unfaithful there.  Later, Kate follows her to the apartment and surprises Abby after a tryst, opening the door on Abby lying naked, luxuriously sprawled across the bed’s tangled white sheets.  Kate stares at Abby with distaste, telling her to put something on, repulsed by how Abby has used her body, even though Kate no longer desires her.

In the short, artfully framed exchange, Passon captures the tension between sexuality and domesticity.  How can women enjoy their sexuality and pick up their kids from school on time?  What’s enough to fill out the outline of a life?  Abby’s fellow moms seem more or less content with their lot.  In the homosocial environment of the gyms and coffee shops they frequent, they prattle on wryly about banalities, which are, finally, the stuff that makes up a life.  And they’re also wealthy suburban New Jersey women who don’t have to work.

But their apparently mundane lives don’t remove them from the complications of sex and power.  When Sam meets Abby for their first encounter, she asks her to pull her hair and to treat her roughly.  Siff and Weigert find all the nuances between two women who seem alike on the surface of their lives, both of whom need to acknowledge that their desire brings an edge that reminds them that so much more roils underneath.  When Kate later reaches out physically to Abby, and Abby tries to show the same sexual intensity with her wife, Kate rejects her, unable or unwilling to plumb those depths.

Abby and Kate are Jewish, an added ethnic touch that helps to specify the kind of suburban life they lead.  Abby is on the board of her synagogue; she’s a good citizen of her community, which as far as she’s concerned doesn’t preclude her extra-curricular activities.  Passon doesn’t judge Abby; instead, she empathizes with her need to have more, to find value in herself in physical, as well as emotional and publicly responsible ways.

Much ire has been expressed recently over Blue is the Warmest Color, Abdellatif Kechiche’s French film that won the Palme D’Or at Cannes and that apparently includes lots of explicit lesbian sex (I haven’t yet seen it).  Julie Morah, the woman who wrote the graphic novel on which the film is based, said in The Guardian last May that the only thing missing in the film were real lesbians (the two young women who play the lead couple are straight).

Any lesbian or gay movie will continue to raise the “authenticity” question, perhaps until sexuality and gender are so truly diverse and fluid, no one will find it interesting to challenge who plays whom and how.  Rose Troche, who produced Concussion, addressed those issues years ago with her work on The L Word, for which she and Ilene Chaiken brought lesbian sexpert Susie Bright to the set to instruct the cast in lesbian sexual practices.  Authenticity issues could be raised about Concussion, but they would diminish another of Passon’s points:  Most of Abby’s women clients aren’t lesbians, per se.  They’ll try men (as her youngest, once virginal client plans to do) or they’ll return to their husbands at the end of the day (as Woman #3 and Sam will do).  But they take a rich same-sex pleasure in Abby’s hands.  It doesn’t matter what the characters (or the actors) “are” or how they identify.  What they do is what counts.

In the end, Concussion is rueful, sobering, and sad, as it refuses to accord lesbian marriages any more potential for perfection than any other.  And even in that, it seems progressive and right.

Concussion, available on demand and at theatres.