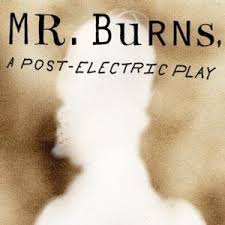 Anne Washburn’s terrific new play, in an elegant, understated production directed by Steve Cosson at Playwrights Horizons, addresses a near-future dystopia in which American civilization has been laid to waste by some sort of nuclear disaster.  The details are less important than their impact; in the play’s moving, compelling first scene, we learn only by accretion what has happened, and why this ragtag group of survivors is assembled in this place and in this way, without ever receiving a full account of the world-changing cataclysm that’s left the tiny community to rebuild itself without electricity.

On a set (perfectly designed by Neil Patel) that evokes an outdoor space whose borders are warily guarded but that can be permeated at any time from any direction, a few men and women pass their time reminiscing not about the families or friends they’ve lost (that comes later, only briefly), but about the elaborate plot points of an episode of The Simpsons called “Cape Feare.”  In Washburn’s elegiac vision, community is rebuilt by remembering together a cartoon series in which the episode being reviewed is itself a multi-layered, post-modern reference to older movies and their newer re-makings, loaded with in-jokes and obscure allusions.  By recalling the rich episode together and jointly acting parts of it out, these folks begin to re-knit themselves once more into something that might be called a society.

That popular culture—and a televised cartoon, no less—would become the common reference point through which to rebuild sociality is a deft philosophical and political suggestion.  Washburn proposes that rather than discreet ethnic, racial, sexual, or gender identities or nationalities (though everyone here seems to be nominally “American”), people will find their way back into a re-imagined social fabric through the memory of a popular culture that called on their hermeneutic insights to make it meaningful and pleasurable.

By setting the play in the future, Washburn points back to the now, in which, indeed, popular culture like The Simpsons is already working to form communities across what were once more rigidly defined identity positions.  The playwright suggests, in fact, that popular culture is already—and perhaps will become even more so in a straitened future—our cultural capital, and will gain more and more exchange value as other forms of currency and commerce becoming meaningless in a post-nuclear disaster world.  The pleasure of remembering narrative—as arcane and irrelevant as The Simpsons episode at first seems—becomes as valuable and luxurious as listening to jazz or classical musical, as watching Shakespeare or seeing a film is now.

Part of the play’s pleasure is how it foils your narrative expectations while the characters enjoy reveling in their narrative reconstructions.  That is, the dystopian genre would suggest at least a stab at new political theorizing, at declamations about how society might reorder itself and its remaining people.  Instead, the outside world impinges on this new community only rarely, and only to stake its claims on the currency of memory.  The new borders have less to do with political theory than they do with shoring up the ensembles that spring up to perform their own memories of The Simpsons episode.  Remembered lines become closely guarded and fought for across these performance troupes, as survivors protect their repertoire of recalled dialogue and scenes and character attributes and inhabit their memories through performance.  Over its three acts (but only one intermission), the play crescendos into economically poor but affectively rich theatricality.  The play’s final performance-within-the-performance implies that the new society has become a simulacrum of the memories it’s reconstructed to constitute its present.

That might sound heady.  There is indeed something philosophical about Washburn’s take on the future and her proposal about how the world might be rebuilt.  But her intensely theatrical vision translates beautifully in Cosson’s production.  The actors, to a person, play from intense naturalism; the play was in fact first improvised with The Civilians, the troupe to which Washburn, Cosson, and many of the performers belong.  Their attempts to recall The Simpsons episode evince the kind of memory-making in which a sudden flash is gleefully announced and happily built upon by the assembled.  Their recollections begin to take shape as a collective image of an imagined past that only ever lived in their individual minds’ eyes.

But those detailed reminiscences become affecting and infectious.  I never watched The Simpsons (although I did screen the “Cape Feare” episode in preparation for Mr. Burns) but even I felt a great deal of pleasure in the cast’s recitations.  Because none of these people knew one another before the apocalypse, but are wanderers thrown together when they escape from towns incinerated by nuclear fallout, they have little in common but their love for popular culture.  That it becomes enough to rejoin them into a semblance of human community—through theatre and performance, no less—is conceptually moving.

The one interaction that actualizes the devastation happens when Gibson (Gibson Frazier; all the actors are called by their real names, and then assume rotating roles from The Simpsons episode) falls across the little group on his way south from Boston.  These chance meetings, it seems, require a ritual.  The new arrival is asked if he’s seen friends or loved ones, whose names the group recalls from notebooks in which they’ve written their names.  Gibson, too, has a book, where he’s listed names of survivors he’s passed along the way.  The rules, though, require that each person share only ten names—someone in fact suggests they heard the sharing has been limited to eight.

As the group runs through their lists, Gibson thinks hard, believes he recognizes one or two, and then shakes his head negatively.  In that simple, sad scene, we see the history of old forms of human fellowship constrained and then dissolving, as we understand that none of these people will be reunited with those they lost.  The hope, in Washburn’s hands, comes from how they re-make communities through memory—and through theatre.

In the first act, the actors’ recall of the episode is narrated, as we watch especially Matt (Matthew Maher, as terrific here as he was in Annie Baker’s The Flick in Playwrights’ last season) throw himself into dazzling feats of remembrance.  By the second act, a make-shift theatre is constructed, as their much reduced living place now has corrugated walls within which a jerry-rigged proscenium has been erected.  The second act is pure rehearsal, as stagehands and costumers work with the actors to prepare their performances and the community is threatened by marauders who want to steal their lines.  In the third act, the performances are so intact there’s very little outside of them—the enactment of a memory of popular culture has become the day’s lingua franca, the way in which they inhabit their lives.

Washburn’s insight into the pull of memory, of popular culture, and of the embodiments of theatre and the necessity of performance is elegant and persuasive.  Somehow, she and Cosson and the cast (aided by Michael Friedman’s wonderful score and especially Nedra McClyde’s gorgeous third-act singing) avoid the imperious irony that might undermine how affecting the play and production turn out to be.  That is, The Simpsons, as I understand the show, often plays with political and postmodernist irony that would keep audiences at an emotional remove.

But in Mr. Burns, audiences are invited to empathize with the situation and the commitment of a band of players arrayed to communicate with one another through memory and pleasure and a strange, inarticulate but present kind of love.  We know little about any of the “characters”—in fact, in the first act, one of the women is withdrawn and tense, and although the others seem worried about her, the audience never learns what’s wrong.  In the second act, she’s become the troupe’s director—she’s articulate, strong, and present.  No backstory explains this transformation; social rules, as well as theatrical and narrative rules, are rewritten in Washburn’s talented hands.

The cast is uniformly excellent.  Along with the enormously affecting Maher, the sober Frazier, and the musical McClyde, Quincy Tyler Bernstein, Susannah Flood, Jennifer R. Morris, Colleen Werthmann, and Sam Breslin Wright work beautifully together, creating a very specifically real emotional and physical world without any of the tricks of conventional theatre.  You see them working together as actors—the actors in this play–Mr. Burns–and as the actors they play in The Simpson episodes they reconstruct.  That labor, Washburn suggests, and that commitment to embodiment, reenactment, and memory, creates a common future, one in which the audience is emotionally invited to take part.

The production and the play are a tour-de-force, an original, smart, moving illustration of possibility, a hopeful reading of a dystopia that could be a nightmare and which, in Washburn’s hands, turns out instead to be life as a dream.