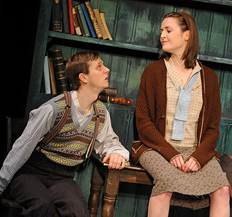 I’ve been living and teaching in Galway, Ireland, since the beginning of June, working with my co-teacher Stacy Wolf, 15 Princeton students, and five local students in a Princeton Global Seminar called “Performing Irishness:  Performance and Theater in Modern and Contemporary Ireland.”Galway is a lovely, small university town on the west coast of the country, boasting a modest city center with twisting medieval-style streets lined with pubs and shops, and buskers with guitar cases or hats in front of them, looking for spare euros.  The docks are crowded with pleasure boats and colorful old wooden fishing vessels, and the row houses that line the harbor are quaint and low.

In Ireland, work that would be considered “mainstream” in the U.S. centers on three central institutional theatres:  The Abbey in Dublin, where we’ll be seeing a production of Brian Friel’s Translations at the beginning of July; to a lesser extent, the Gate, also in Dublin, where we hope to see a production of Friel’s Molly Sweeney; and the artistically adventurous and politically-minded Druid Theatre here in Galway.

Druid’s artistic director Garry Hynes was one of the first women ever to win a Tony Award for Best Director (in 1998, for Martin McDonagh’s The Beauty Queen of Leenane.  Julie Taymor also won that year for her direction of the musical The Lion King).  Hynes has lead Druid for most of its existence. The company began in 1975, started by Hynes and two other then-university students, and has built a reputation in the last 35+ years as a major incubator for Irish artists.

The company’s home is a former tea warehouse, a structure with stone walls that dates back to the 14th century.  The performance space is a small black box, fronted by a crowded rectangular lobby.  A second floor rehearsal room with a wood floor and a cathedral ceiling has square windows that look out over the narrow alley Druid calls home.

Tim Smith, the company’s British managing director, told us when he met with our class that Druid actually gentrified Galway’s city center when they started the company and took over the warehouse.  The mostly abandoned area has grown into a vibrant tourist magnet with a lively pub culture.  Druid uses Galway’s nearby 400-seat Town Hall, a producing venue with ever-changing fare, for larger productions, since it’s financially more viable than their home base, which seats just over 90.

We were lucky enough to see Give Me Your Hand on June 21st in Druid’s space.  The two-person performance is a lovely evening of reader’s theatre based on Irish poet Paul Durcan’s poems, in which he uses famous paintings in London’s National Gallery as prompts for stories.  The performance’s web site quotes Bryan Robertson’s introduction to Durcan’s collection:  “He glides in and out of the subject or content of each painting that inspires him.  He projects himself into the personages, the situations, treats the paintings like kites in the gusty air of his imagination.”  This succinct description captures the spirit of the performance, too.

The inventive poems are brought to life by the eminent Irish actors Dermot Crowley and Dearbhla Molloy, who read them from music stands poised across from one another.  They face the audience underneath pictures of the paintings that the poems they read bring to life.   Projected from a laptop that Crowley controls remotely, the images cross-fade and dissolve after each story, which imagine the relationships the paintings depict in funny, often anachronistic ways.

The poems and the conceit are instantly charming and delightful.  Each painting presents new characters, which Crowley and Molloy imbue with new accents and attitudes without ever moving from behind their stands.  The two consummate actors establish a basic warmth between them and the audience that carries the stories into the short evening.  Each little tale is unique and sweet, sometimes funny, sometimes a bit sad or moving.

The evening is a testament to simple creativity, to the evocative sounds and stories of well-written words, and to the embodiments of actors who can create place and character with simple shifts of tone, voice, and dialect.  The delicious performance toured a few U.S. cities in 2011; the web site provides chunks of the poems as teasers and images of the paintings used as inspiration.

Druid’s production of McDonagh’s The Cripple of Inishmaan has just returned home after a six-month tour through the U.S. and Ireland, during which they visited nine American cities.  The Hynes-directed production, performed for hometown audiences at Town Hall on an imaginative set designed by Hyne’s frequent collaborator, Francis O’Connor, received a rapturous response in Galway before the cast and crew headed out to the Aran Islands, on which the play is set, to perform for locals on Inishmaan itself last weekend as the tour’s final flourish.

Although local news coverage suggests the production was well-received (and significant enough that Ireland’s president attended, along with McDonagh and his parents), Cripple doesn’t exactly flatter the Aran Islanders.  Set in 1934, the play slices off a moment in the lives of a colorful collection of odd and salty Irish types, all united by their reactions to “Cripple Billy.”

Billy Claven (Tadhg Murphy) is a young man who was orphaned when his parents drowned under mysterious circumstances and was taken in by spinster sisters Kate (Ingrid Craigie) and Eileen (Dearbhla Molloy), who’ve cared for the unfortunate, physically misshapen but spiritually dreamy boy ever since.

McDonagh propels the plot around the moment when Hollywood filmmakers came to Inishmaan to make Man of Aran, a pseudo-documentary about the locals.  The crudely sexual Slippy Helen (Clare Dunne) and her hapless brother, Bartley (Laurence Kinlan), bribe BabbyBobby (Liam Carney), a local fisherman, to take them to the nearby island of Inishmore to audition for the film.

Hearing their plan, Billy, too, decides to try his luck, concocting a scheme to persuade BabbyBobby to take him along, despite the superstitions against “cripples” on the sea, to meet the Hollywood producers.  Ironically, it’s Billy who’s selected to come to Hollywood to continue his audition, leaving his friends and his aunts behind to grouse about his lack of communication and gratitude.

JohnnyPateenMike (Dermot Crowley) is the local town gossip, who eavesdrops at doorways and around corners to collect people’s personal news, which he trades with neighbors for canned goods or other comestibles.  JohnnyPateen lives with his ancient, alcoholic mother, Mammy O’Dougal (Nancy E. Carroll), who’s sharp as a whip but immobile except for the arm that lifts her bottle of potcheen, an old-fashioned Irish rot-gut liquor much like moonshine.  The fussy JohnnyPateen expects quite a lot from Kate and Eileen in exchange for his information (which they mostly find useless), but his constant prattling brings a comforting kind of company.

Young Slippy Helen’s job is to deliver eggs, despite her preference for throwing them at people or breaking them over her brother’s head.  She enlivens the local atmosphere with mean accounts of her sexual ministrations for the island’s men (although mostly, she admits, its priests whose private parts she’s seen most of, letting McDonagh draw blood from one of his favorite targets—the Catholic Church).

Cripple is a dark comedy, boasting the biting satire and sometimes cruel humor for which McDonagh is known (and often considered controversial).  Although he was raised and lives in the U.K., his Irish-born parents brought him to summer in Ireland’s Connemara throughout his youth.  Whether or not this gives him leave to boldly (or viciously) parody local mores is an open question. Cripple achieves its comedy through a rather absurdist use of language and pacing, especially under Hynes’s precise direction and the actors’ well-honed and finely timed delivery.

In Cripple’s opening scene, for instance, Kate and Eileen stand behind the counter of the local store they own, staring into the distance, hands idle, eyes never meeting, repeating one another’s sentences as they wait for Billy to arrive.  The two performers execute the hilarious scene beautifully.  Later, once Billy’s left for America, a similar scene uses the same style to repeat the phrase “not a word” more times than one would ever think possible, with growing levels of intense, comic, resentment for Billy’s disappearance from Kate and Eileen’s lives.

As played by Murphy, Billy is a soulful, sensitive young man, whose physical disabilities prevent him from fully taking part in the life of the town.  His ill-formed arm and his hobbled leg give him a shuffling gait, but his face is much sweeter than his aunts initially suggest, and there’s nothing wrong with his mind or his emotions.  The other characters, McDonagh suggests, need Billy’s difference to secure their own normalcy, even though they, too, are far from typical.

Billy’s struggle for dignity is told through his interactions with the others, for whom his escape to Hollywood proves something of a catalyst.  But we hear no more from him than we do from the others, resisting the impulse to make him anything of a hero.  McDonagh renders Billy’s actions and his future ambiguous, ending the play on a cruel irony.  But he suggests that in many ways, everyone in Inishmaan is crippled—only Billy’s handicap manifests physically.

The Druid production boasts the settled confidence of one that’s toured on and off since 2008.  The acting is sure and easy; you can tell how much fun the actors have together, and how lived-in their characters feel.  In a talk-back after one of the three performances presented at Town Hall this week, managing director Smith facilitated a conversation with Craigie (who played Kate), Dunne (who played Helen), and Carroll (who played Mammy), who described the various reactions to the production in Ireland and in the U.S.

Although they outlined the cross-national differences in response, Smith and the actors declined the production’s status as a national export that “represents” the country abroad.  Smith says that Druid’s mission is to do good work by Irish writers, but aside from that simple criterion, they don’t seem partisan to what “Irishness” might mean.

Aside from a bit of vocabulary, the dialect and syntax of the language, and the Aran Islands setting, the play resonates with a perhaps universally western understanding of life in a small town circa 1930, suffocating to some and comforting to others, where everyone knows one another’s business and the choices to enlarge one’s life are few.  Seeing the play on the islands, however, might bring it new colors and meanings.

In the second act, the villagers watch the film Man of Aran together in a public place, perplexed over what the fuss is about.  The Cripple program relates that the documentary, directed by the American filmmaker Robert Flaherty in 1934, “depicted the supposed ‘daily life’ of characters living on the Aran Islands . . . Many situations were fabricated, such as one in which fishermen are almost lost at sea on a shark hunt.”

Watching the film with ill-concealed apathy, Helen and the others focus comically on whether or not the fishermen have caught a shark (and whether, in fact, sharks swim in Irish waters).  They clearly don’t for a second imagine that the film has anything at all to do with their lives, even though it was meant to faithfully represent their “otherness.”

In McDonagh’s sly account, the film might be a metaphor for his own play.  Seeing that scene on Inishmaan, among islanders who the film and McDonagh’s play purport to be about, was probably deliciously layered and complicated.  (An account of the production on the RTE news features Ireland’s President’s attendance and solicits post-show comments from well-heeled spectators.  It’s not clear whether the more rural residents of Inishmaan were part of the audience.)  Whatever Druid intends about performing Irishness in Ireland and abroad or not, the enactment of identity and the impossibility of fixing a national character should be palpable.