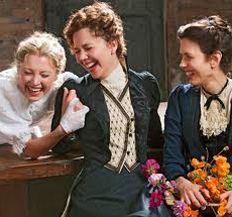 Austin Pendleton directs Paul Schmidt’s translation of Chekhov’s play with verve and surprising wit, giving the play a hint of contemporary relevance while maintaining a light touch over the production’s pace and tone. Schmidt’s translation is breezy and colloquial, sometimes awkwardly balancing the lyricism of Chekhov’s poetry with a vernacular style that sounds a lot like the way upper-middle class American young people speak in 2011.

The language makes the production at once a pleasure, tilting it on balance more toward the comedy than the tragedy in Chekhov’s “tragicomic” genre, but also makes it just a little difficult to determine what exactly the production wants to say to contemporary audiences.

The three sisters stand out in an extremely talented cast. Jessica Hecht’s Ólga (accents over the characters’ names come from the production program) is tired but empathetic, the first to sound the alarm about the encroaching Natásha’s excesses. Maggie Gyllenhaal brings Másha more than a little sultry sexuality and sly wisdom, which makes her abandonment by Lieutenant Vershínin at the play’s end that much more affecting. Juliet Rylance captures all of Irína’s ambivalent yearning for a way to be a better, more effective person, even as her suitor, the doomed Baron Tuzenbach (Ebon Moss-Bachrach, wonderful as the foolish, love-lorn solider) fails to capture her romantic imagination.

Instead of the isolation and stately loneliness some productions bring to the sisters’ relationship, Hecht, Gyllenhaal, and Rylance are girlish together, touching one another constantly, speaking directly into each other’s faces, always in proximity, and feeding one another’s illusions about how they’ll escape their country lives and leave for Moscow (or anywhere, by the play’s end).

Yet their girlishness doesn’t denigrate or diminish them, so much as it gives them a way to perform their hope for a different future and their faith in one another. Ólga, Irína, and Másha cling together in what the actors play as a well-worn pattern of mutual support and affection, as well as a physical strategy for keeping the real world at bay.

The strength of the women’s performances clarifies that the sisters rule their fading aristocratic home, but the end of their class privilege is signaled when Natásha instantly begins running the household after she marries their brother, Andréy (a soulful, befuddled, and finally furious Josh Hamilton). Chekhov invests in Natásha all the uncouth flailing of what he saw as the ascending middle-class. Her terrible French accent horrifies the sisters, who palpably dislike her, even before she begins reassigning their bedrooms so that her baby can have the house’s best air and light.

She moves Ólga and Irína farther into the house’s lower regions, dismantling their power and their right to their own property. And, of course, one of Natásha’s last stated intentions is to cut down the trees that line the family estate which, as always in Chekhov, represent stability, history, and the privilege of nobility.

The beginning of Natásha’s reign ends an era for Chekhov, with the aristocrats’ fall aided and abetted by an indolent military, represented in Three Sisters by the company of soldiers billeted with the family. The soldiers sit among the women, drinking, playing the piano, eating, and commenting with nonsensical self-importance on the non-events of the day.

Vershínin’s arrival, and his subsequent affair with Másha, propels the slender plot, and his departure, with the rest of the company of soldiers, marks its end. Peter Sarsgaard has a grand time with the pompous lieutenant, bringing to the static household a galvanizing charisma that re-enlivens the sisters’ hope for an elsewhere that never materializes.

Often, watching productions of Chekhov, I get lost in the too-similar Russian names and the indistinguishable, interchangeable characters, whose roles seem only metaphorical. But Pendleton and his superb actors make them all lively and distinct, so that even the minor soldiers and the townspeople become vivid and meaningful.

Each character’s trajectory is clearly plotted and fully delivered, so that what begins, for instance, as Andréy’s romantic, absent-minded artistry ends as his brooding, resentful parenthood, as he miserably pushes the baby’s carriage around the stage while his wife openly carries on an affair.

Natásha, inhabited beautifully by Marin Ireland, begins as an insecure, flibbertigibbet of a schoolgirl, and ends as an imperious, thoughtlessly cruel, impatient harpy, whose dismissal of the sisters’ old maid, Anfísa (Roberta Maxwell), is particularly horrific because it’s so casually heartless.

Pendleton crafts a series of fully interconnected but completely distinct moments of complex emotional and political interaction among the characters. Their delusions accumulate, one upon the other, so that the weight of their collective self-sabotage becomes at once heartbreaking and infuriating. Paul Lazar is particularly good as Kulýgin, the schoolteacher married to Másha, whose puffed up pride keeps him from seeing the extent of Másha’s betrayal.

Pendleton and his designers—Walt Spangler (sets), Keith Parham (lights), and Marco Piemontese (costumes)—use the Classic Stage Company’s modified thrust, with the audience seated very close to the stage floor action on three sides, to enhance the play’s claustrophobia. In the first two acts, he blocks the action around a dining table so large it takes up two-thirds of the space. The sisters and Anfísa lay the table with elaborate silver and stemware, as if preparing for holiday feast instead of a regular repast, and the dinner guests take their seats with the familiarity of those participating in a well-grooved ritual.

When the play opens, live flowers deck the domestic scene with fresh and colorful loveliness, which proceeds to pale as the production moves forward. In the second act, the flowers are gone and the table is bare, and the evening’s debauchery feels more desperate and less refined as the sisters and the soldiers sing and play drinking games with their glasses of vodka while Natásha scolds them for waking up her precious baby.

The claustrophobia of the interior scenes gives way in the final act to the outdoors, where old Chebutýkin (Louis Zorich) rattles his newspaper and sputters about how nothing matters, even after the poor Baron is killed in a duel with his moody, jealous colleague Solyóny (the dark, dashing Anson Mount). Chebutýkin’s tuneless humming, and his sneering insistence that marrying one man is the same as marrying another, becomes the play’s hopeless benediction.

The contemporary resonances sound most clearly in the second act, when Másha and her soldier friends play their senseless games, down their vodka, and declare that they’re bored. The assembled adults seem child-like when they whine, and their plaints ring with the rank privilege of those too wealthy and coddled to know how to amuse themselves.

Their moral vacuity contrasts sharply with Irína’s frantic desire to work, to contribute to the world in order to find it meaningful. But she, too, reveals her shallowness when she comes home tired and irritated that the work she’s found is only physical, not the spiritual uplift she expected from her engagement with a wider society.

Perhaps because the production itself is star-studded, I came away feeling that the contemporary allegory of Three Sisters had something to do with the wages of American celebrity, where bored rich kids like poor Lindsay Lohan and all the other too thin, hyper-sexualized, vapid young women and pretty, silly young men parade themselves for the world’s amusement while nothing on earth of substance happens to them.

The insipidness of their visibility recalls the static, empty privilege of the dying aristocracy Chekhov sentences to a kind of house arrest on the Prózorov family estate. It’s difficult to feel sorry for these young people, now or then. Pendleton’s production makes the characters compelling, their stasis sad, but it’s difficult not to say to them or to young privileged celebrities now, Please, just get a grip and do something.

Three Sisters, The Class Stage Company, through March 6th. I saw the performance on February 5th, 2011.