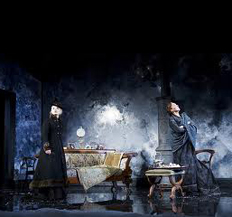 This production, by Dublin’s Abbey Theatre, of one of Ibsen’s last plays, is beautiful from top to bottom, but the set and the performances far outweigh the text itself. The play is a pot-boiler that touches on most of Ibsen’s major themes without offering any new insights into his well-established views on bourgeois corruption and stultification. Because the Abbey’s production doesn’t reimagine the text—in what the program calls a “literal translation” by Charlotte Barslund, although the credits indicate Frank McGuinness provided this “new version”—the play seems an anachronistic chestnut, even as the lead performances by Fiona Shaw, Alan Rickman, and Lindsay Duncan make it a vivid, compelling evening of theatre.

The title character (Rickman) is a bank manager of raving ambition, who was caught embezzling and sent to jail for five years. As the play opens, he’s eight years into his subsequent freedom, but has traded his prison cell for a domestic incarceration that’s in some ways even worse. He and his wife, Gunhild (Shaw), occupy separate floors of the family home. Borkman’s incessant pacing across his study floor above her drawing room drives Gunhild mad, and her fury with her husband for sullying their family’s name keeps her stewing in her own resentments and regret.

Gunhild pins her hopes for a resurrected social standing on her son, Erhart (Marty Rea), a flighty young man who can’t bear the weight of his mother’s mission. Erhart is in love with the wealthy divorcée, Mrs. Fanny Wilton (Cathy Belton), who plans to spirit him away from his family’s estate for her own amusement. Into an already fraught domestic scene “descends” (as the others describe her unexpected and undesired arrival) Ella Rentheim (Duncan), Gunhild’s twin sister and Borkman’s once lover, whose own wealth has saved the family from certain ruin during and after Borkman’s imprisonment.

Ella arrives with her own designs on Erhart, whom she looked after during Borkman’s trial and conviction, when Gunhild was in no shape to be the smothering mother she’s now become. For her own apparently good reasons, Ella wants Erhart to live with her again, and to take her name, so that the Rentheim line won’t die out at her own (imminent) demise.

Ibsen’s creaky plot grinds into gear, laying the seeds of its ultimate, unsurprising conclusion.Characters reveal few secrets to overturn the audience’s expectations and little suspense propels the plot. Borkman’s characters confront one another, digging deep into the psychology of their immorality and enmity. But ultimately, they don’t tell us anything we don’t already know or can’t surmise, given the genre and the author.

The actors play Ibsen’s histrionics admirably, and director James Macdonald keeps them all on the same heightened plane. Shaw modulates Gunhild’s resentful fluttering with moments of real strength, when the actor’s comic physicality almost seems to comment on her character’s simpering. Duncan holds Ella erect with calculated effort, carefully maintaining her superior façade. When Ella confronts Borkman in his study, we learn that he ended their relationship in a cold-hearted deal that won him his position. Ella accuses him of murdering love; he doesn’t disagree, but nor does he care.

The characters’ wanton, calculated inhumanity to one another makes it difficult to empathize with any of them. As if anticipating this response, Macdonald encourages the actors to play up the worst in these people, reassuring us that we don’t, in fact, have to like any of them. If they become a bit caricatured, as a result, the heightened style allows spectators to forget about a deeper emotional response and to simply enjoy the artifice of the plot and, especially, the setting.

Designer Tom Pye keeps the bare back walls of BAM’s Harvey Theatre in view (if in shadow), and director Macdonald calls our attention to the flies very high above the stage floor action. Because Gunhild and Ella continually look up, haunted by the persistent sound of Borkman’s footsteps as they ring above (thanks to Ian Dickinson’s terrific, ominous sound design), spectators are repeatedly encouraged to note the high black void into which they peer. The heaviness of that empty space—infrequently punctuated with lighting designed by Jean Kalman—bespeaks a hollow heaven to which no one can appeal for forgiveness or assistance.

The drawing room in which Gunhild and Ella stage their initial showdown (which, played by Shaw and Duncan, is probably the juiciest scene in the production), is set with furniture pieces that seem to float in undefined space. The interior scenes are surrounded on three sides by mounds of glistening white snow, which seems to sparkle off the polished, black stage floor. The cold outside encroaching inside is a fine analogy to the essentially frozen void in these characters hearts’.

The play’s penultimate scene takes place, in fact, outdoors, as Erhart and Mrs. Wilton escape by sleigh, and Borkman leaves the house to breathe fresh air for the first time in eight years. He refuses to return to his captivity, even as a fierce blizzard blows in to freeze him, Ella, and Gunhild. The stage-hands create a storm of blowing wind and snow that covers the stage floor and the actors’ costumes and rains down through most of the final scene. The spectacle is as heightened as the acting, but in many ways more subtle, beautiful, and effecting than any of evening’s dialogue.

Giving in to the story’s extremes makes John Gabriel Borkman most pleasurable. Ibsen starkly draws the characters’ struggles: Borkman’s raw ambition requires power, money, and influence, and he’ll sell his soul to achieve it; Gunhild requires social approbation, and will sell her son’s soul to get it back; Ella yearns for the love Borkman extended and withdrew, and will steal her nephew’s affections to retrieve it; and Erhart himself desires only the satisfaction of his own pleasure, provided by the willing and able, slightly older and more sophisticated Mrs. Wilton. Only Erhart gets what he wants, and in her exit speech, Mrs. Wilton suggests that even she understands their hedonistic arrangement won’t last forever.

The play ends with a rapprochement of sorts between the sisters, over the body of the man whose fortunes kept them separate for most of their lives. But Borkman isn’t one of Ibsen’s feminist plays.Shaw and Duncan play Gunhild and Ella with wily passion and strength. But women are regularly betrayed and belittled here, often with lines that provoke unintentional laughter from the audience.Presented with the spectacle of a grim, misogynist modern drama, unadorned and unredeemed by a good rethinking, laughter might be the best response.