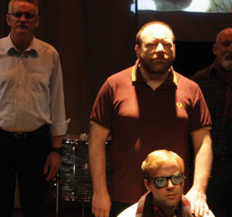 Silver Stars is a community-based, devised theatre piece by an Irish theatre company called Broken Talkers, who create work by mining people’s stories about their lives and knitting it into coherent evenings of theatre. The play, which I saw performed at the Under the Radar Festival at the Public Theater on January 16, collects narratives from middle-aged Irish gay men who, because of homophobia in their native country, had to flea elsewhere to live honestly and comfortably. Ten men tell the stories, sharing narration duties, so that it’s not necessarily clear whose story belongs to whom, or whether or not, for that matter, the story’s origin necessarily lies in anyone appearing on stage.The company has done a kind of ethnographic work to collect these narratives, which are then distributed among an amateur cast to be told, and turned into songs that dot the short performance and help texture it with emotional nuance that might otherwise be missing.

The songs are played by a trio of female cellists and a male electric guitar player who conducts this small but effective band. In the musical idiom of Phillip Glass or Steve Reich, played in repetitive but emotionally resonant and increasingly mournful tones, the music and songs allow the actors to tell these stories in quite a different register than the generally flat, uninflected vocal delivery they otherwise use. Perhaps the director didn’t trust the acting ability of these non-performers—to a person, they keep their faces still and impassive throughout the performance, even when the stories intensify and climb to greater emotional heights. Likewise, their voices are generally unmodulated. They don’t speak in monotones, but neither are their voices scored to reflect more poignantly the often brutal or devastating stories of family banishment and lovers’ deaths that for the most part provide the performance’s emotional key.

In some ways, this careful avoidance of outsized emotionality works well, as it allows you to trust the stories instead of distracting you with what could too easily be performance histrionics. The ten men range around the stage, positioned frontally toward the audience. But during each story, they turn their heads to listen to the central narrator, often contributing a line or two for punctuation or effect. The performers demonstrate careful, attentive, protective listening, perhaps modeling for the audience the calm but intense concentration Silver Stars wants us to bring.

Broken Talkers are known for combining media with live performance, and Silver Stars includes several video clips, projected on an aesthetically pleasing bright white square screen situated behind the performers stage left. In one scene, one of the younger men sits on a chair down center, and puts on large, black-framed glasses with eyes painted on the lenses in that psychedelic black and white swirling pattern that makes them appear to both actively bore into you and to be quite vacant and dead. The performer sits with his back to the audience as he’s filmed by a live video feed provided by a camera operator situated in the wings. His face is projected onto the screen as he tells his story, distancing the audience but in some ways making his account that much more intimate because the live projection brings him closer to us at the same time.

Some of the men are dressed formally in suits and ties, while others wear jeans and sweaters, standing with their hands tucked into their pockets. The men, throughout, are strikingly still; they move only occasionally, creating various groupings to which they walk with slow determination, in some ways illustrating how they left Ireland to find lives more accommodating to their gay desires. Sometimes they stand together, ranging across platforms that stagger their heights; sometimes, they stand across the stage distinct and alone, but maintaining that intense quality of listening that connects them in an invisible but unbreakable web.

Ironically, the actual stories are the least memorable aspect of Silver Stars. The names of the men in the are are projected on the video screen before each narrative, which describe parents disgusted by their sexual preferences who banish them from the family home, later to regret their actions. One story, in fact, is told by parents, Irish but living in America, videotaped sitting side by side in matching arm chairs, who describe how they couldn’t abide their son’s sexuality until he told them he was dying of AIDS. Only then could his father, in particular, set aside his distaste and figure out how to love his son regardless. He castigates himself for his narrow-mindedness, and describes how close he and his son became in the four remaining years of his life. The father’s unmediated grief and shame in his own behavior is poignant and raw, even on tape, and his wife, in a thicker Irish brogue, is nearly inarticulate with her own loss.

The stories delivered live by the performers for some reason stuck with me less. One relates how his lover, too, died of AIDS, how they’d always been together, an unbreakable pair whose names were inevitably linked in friends’ conversations, and the gaping absence left by his lover’s untimely death. Another story describes a young man leaving Ireland to find his sexual identity elsewhere, meeting two men on a train who take him under their wing, treat him to an adventure of gourmet food, elite hotels, and brilliant meetings with handsome men. His new companions turn out to be Benedictine monks, who bring him back to their monastery, where he finds these men have formed a beautiful, erotic, aesthetic community in which to live happily and with great devotion.

Each of the stories delivers its own poignant slice of life, most with the same elegiac, mournful or vaguely astonished happy tone, hitting their assigned marks both physically and emotionally before the performers fall back into their collective community. They take good care with one another and with the words they share, and the audience watches and listens with great respect. Because Under the Radar Festival, which produced the production, takes pains in the program to tell us they’re not really actors, it’s easy to admire the performers’ candor and bravery, as gay men willing to take the stage to tell stories about their lives or those similar to their own. Backed with graceful, mournful music that follows them along protectively and occasionally lets them sing or keen together, the men dutifully deliver the news that gay men in Ireland, even today, remain marginalized and too often despised. Silver Stars demonstrates how this particular group has put their lives together anyway, and lived, literally, to tell the tale.

The audience with which I saw Silver Stars at the Public was sympathetic and generous, inclined to listen intently and to witness these narratives as the men on stage did for one another. At the end of the performance, as people trickled out of the large Newman Theatre, the performers appeared back on the stage, coming out in the house to greet friends and acquaintances. Someone asked that they assemble for a photograph, and they formed a line on stage with their arms around one another’s waists, for the first time all evening smiling happily and proudly.

I was glad to witness that extra-theatrical moment, because it clarified the event’s personal importance for the performers. Watching them get their pictures taken felt like being in a high school auditorium after the senior play, when the actors are relieved at getting through their show, happy for the attention, grateful for the presence of their friends and families. Seeing these men gather, and watching their friends celebrate them, helped me recall that community-based theatre like Silver Stars is so important to people’s lives, not just for the stories it shares but for how it provides an opportunity for people like these ten men to stand within those stories, to justify and take pride in the lives they present in ways that few other social rituals provide. I was proud to be there.