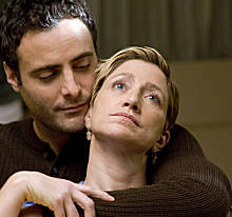 Now that the first season of Showtime’s Nurse Jackie has ended, I was happy to find out that the show has officially been renewed. After I last wrote, the series only got better, more complicated, more darkly funny, and occasionally, poignantly, sad.

One of the most interesting things about Edie Falco’s leading character, Jackie, is that she has no real back story. Although we know that she has a husband and two young daughters with whom she lives above the bar they own in Queens, and that she has a pharmacist lover named Eddie with whom she has sexual trysts every day at work, we don’t know why she keeps her two lives so resolutely separate. We also don’t know why she’s a drug addict, aside from the usual stress (and temptation) that plagues some nurses in chaotic, poorly staffed and resourced city hospitals.

Rather than becoming irritating, however, Jackie’s mystery adds to her allure. She’s an enigma not just for her co-workers—who alternately find her brusque and sensitive, present and distracted—but also for viewers accustomed to having characters’ histories laid out with too many dollops of information. Instead of a pat psychological reason for her odd behavior, we’re asked to go on faith that Jackie needs her life the way it is. The reasons don’t matter, only that she’s able to maintain the fine line of keeping her separate worlds far enough apart and her addiction hidden.

Only halfway through the first season does it become clear that even Jackie’s best friend at work—Dr. Eleanor O’Hara (Eve Best), who’s officially her superior—doesn’t know about her drug problem. When Jackie’s nose begins bleeding from all the drugs she’s snorting, O’Hara checks out her nostrils and comments that she doesn’t know what Jackie’s been putting up there, but her sinuses are entirely irritated. Jackie responds with her trademark eye roll and brushes her off.

When her lover Eddie is replaced by a computerized machine that dispenses meds, Jackie’s need and desperation become palpable for the first time. With Eddie down the hall happy to ply her with Vicodin and other narcotics that make her sexually pliable, Jackie didn’t have to worry about her next fix. Without him present, she tries to game the machine the way he taught her, but the trick doesn’t work. She winds up punching in her own name and password to retrieve three vials of drugs, which she proceeds to pour down her throat without a chaser.

As the final episode of the season ends, Jackie drifts into a drug-induced haze, hallucinating herself dressed in 1950s white nursing finery, and waving to her husband and kids, who stand in front of a two-dimensional, cartoon-like, suburban-style ranch house wearing 1950s-styled clothing, waving at her robotically. Sprawled on the hospital floor comatose, Jackie can only watch these images play out in front of her as the scene fades to the credits.

The moment, typical of the crises that usually propel a series to the closing moments of a season, is disturbing and compelling. Is Jackie afraid of being trapped by the conventionality of her domestic family life? Is that why she has a secret affair with Eddie, and doesn’t tell any of her coworkers that she’s married and has two kids? Is she smart enough to want to resist the banalities of middle-class white heterosexuality, even as she’s clearly, at an earlier point in her life, decided to acquiesce to it? Does she take drugs because of her back pain (which isn’t mentioned much as the show progresses), or because she needs to take the edge off a life that can’t contain everything she feels herself to be?

Whatever the reason, to see a woman as complicated and wonderfully opaque as Jackie Peyton (shades of the old soap, Peyton Place?) anchor a series on a major cable network feels like something of a triumph. Jackie isn’t a perfect mother—in fact, although she takes her oldest, the troubled Grace, to mother-daughter tap dancing classes, Jackie’s skirmish with an old high school friend embarrasses both of them and they abandon the class.Jackie isn’t the perfect wife—she works nights, which means that she and her husband are passing ships in a domestic sea that’s often barely functional.

Jackie isn’t the perfect nurse—she operates under her own moral code, which means that sometimes, she breaks rules to favor people she decides won’t otherwise get a break.She’s unsympathetic with her trainee (although over the course of the season they’ve developed something approximating a warm understanding) and she’s flip with her superior. She’s a flawed middle-aged woman, a character not often enough seen on television.

Although these days, that’s not entirely true. Jackie Peyton joins the ranks of Brenda Johnson (Kyra Sedgwick) on The Closer; Patty Hewes (Glenn Close), on Damages; Nancy Botwin (Mary-Louise Parker) on Weeds; and Grace Hanadarko (Holly Hunter) onSaving Grace, all of whom are middle-aged white women with “issues,” whether drug addiction, dire financial problems, alcohol abuse, or power mania that make them as complicated and imperfect as the male heroes who more typically star in television series.

The surrounding characters on Nurse Jackie help flesh out the quirky environment, and each became more adroitly drawn and magnetic as the season proceeded. Although Mohammed de la Cruz, Jackie’s best friend on the ER floor, remains something of a cipher, his desire for other men has been flaunted happily throughout the season. And instead of being the lone gay man, another of the male nurses—the white guy with sandy hair and a more fey demeanor—is also openly queer. The two often perform scenes together, in which they cruise patients or tell Zoey, Jackie’s bumbling assistant, how she might improve her appearance. Although these characters still trade in stereotypes, at least there are two of them on the show regularly, creating a small but important queer community.

Likewise, Zoey has become sharper in her own zesty, over-sharing, over-caring style. By the season’s end, the character had come to think she knew Jackie, a rather endearing assumption, given all of Jackie’s dark and mysterious layers. Merritt Wever, as Zoey, is ever more fabulous in the role, her comic timing impeccable and her physical humor deft.

The best supporting character, however, is Mrs. Akalaitus, played by Anna Deavere Smith in one of her best scripted acting outings. In the season finale, Akalaitus gets stuck in an elevator, and rather than hurry to rescue her, the nursing staff lets her languish before they call for repairs. To entertain herself (and us), Akalaitus props herself against the stuck doors and pretends she’s being interviewed on the Letterman show.

Smith carries off the brilliant, hysterical bit of business with panache, and reveals the human side of the character. The scene tempers her rule-bound ambition, just as Akalaitis’s attachment to an Asian baby left behind (for weeks, it seemed) in the ER earlier in the season showed her softer side (although the storyline was far-fetched and her failure to call in the authorities completely out of character).

Watching a series as smart and morally, emotionally, and ethically complicated as Nurse Jackie, peopled with so many interesting, unique, and individualized women and gay male characters has been a real treat. That the story proceeds from a flawed woman’s perspective feels like progress indeed.