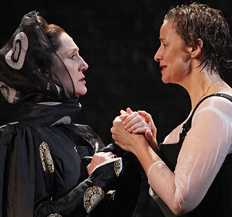 Schiller’s play Mary Stuart stages a fictitious meeting in the late-1500s between the queen of England and her cousin, the queen of Scotland, a pair of rulers who fought to Mary’s death over religion, power, and the English throne. But this Donmar Warehouse transfer production of a play written in the 1800s that refers to English history of the 1500s has an utterly contemporary aspect.The fabulous Janet McTeer just snagged a Tony Award nomination for her role as Mary; McTeer can make any part in any play vibrate with life and intelligence. She wields mesmerizing physical and emotional command of her role as Mary that’s thrilling to watch.

Peter Oswald’s new version updates Schiller’s language, so that the dialogue sounds fluent and natural to contemporary Western ears. For instance, the first scene, between Mary and her nurse, Hanna (Maria Tucci), who’s raised her and sees her to her death in the end, plays like a 21st century mother/daughter moment, with all the warm, casual physical intimacy derived from a long and candid relationship. The dialogue’s realistic cadences abate what might otherwise be a very talk-heavy play.

The production style, too, clears away what could have been historical visual clutter to reveal the kernel of the play’s conflict. Mary Stuart’s spare set butts up against a constructed wall of black brick that looms, immobile as the Queen of England, behind every scene. The stage is sometimes decorated with a simple bed and a chair; sometimes, with a small desk or a bench; sometimes, with nothing but the bodies of the actors, carved by light (designed by Hugh Vanstone).

The production exemplifies the austere, actor-centered Donmar Warehouse-style direction and design, which retains its appeal on Broadway. The sharp, cinematic lighting sculpts the actors, so that every word and every shift in emotion is recorded with searing verité. Director Phyllida Lloyd, who took so much flak for her work on the Mamma Mia film, creates a fluid, fast-paced production that focuses our attention on the human costs of state power, a theme that never loses its relevance.

The costume design, too, helps anchor the production’s transhistorical import. McTeer’s hair is bobbed in a modern cut, while her dress evokes the 16th century more than it quotes it. While the women are all dressed in vaguely period fashions, the men wear black business suits with white shirts and dark ties, clad as though they’re CIA or FBI operatives—which in some ways, they are.The men’s machinations disrupt what might otherwise be an innate sympathy between the two powerful women.

The long-imprisoned Mary, whom her cousin Elizabeth (Harriet Walter) suspects of conspiring to usurp her title to the English throne, believes that if Elizabeth will meet with her, and allow her to make her case in person, their common condition as women trying to rule will prevail and her cousin will allow Mary to go free. Schiller’s play stages the meeting, even though it never actually took place. The scene between the two women—by two terrifically talented actors—is the play’s climax, though a subsequent sequence of arresting, carefully choreographed stage pictures and haunting sound effects lead the spectator through the doomed Mary’s march to the guillotine.

In Schiller’s rendering, Elizabeth dictates Mary’s execution orders with murky ambivalence, and gives them to a bumbling aid-de-camp who’s utterly unsure of their exact import and her intent. His superior officer forestalls the aid’s frantic indecision by taking Elizabeth’s order in hand and setting Mary’s beheading in motion.

Lloyd makes terrific use of theatre effects to evoke the tragedy of Mary’s death. The court allows Mary to see a priest for her last rites, the first time she’s interacted with her own religious traditions in decades. McTeer as Mary exudes peace and lightness of spirit after her priestly blessing, and approaches her death with energy and dignity.

McTeer plays Mary’s final exit with ironic exuberance, as though death is finally her liberation. The men, who are the agents of her demise, line up at the top of the stage, facing off right into a bright, beckoning light. They linger there like harbingers of fate, while Mary completes her affairs and takes her place at the head of their line, in front of her trusty nurse, asserting her stateliness and her authority until her very end.

As they somberly march off, sound effects represent Mary’s beheading. Clanging chains echo across the stage, and we hear at last the final, horrible sound of the guillotine descending swiftly, with a metallic, audible sharpness, toward Mary’s neck.

After this provocative aural moment, the play returns to Elizabeth’s chamber, where she’s been persuaded into a change of heart, only to learn that her aid followed through on her command to consign her cousin to death.

Mary Stuart’s final scenes underline Elizabeth’s weak indecision and her refusal to take responsibility for her cousin’s execution. She twists her memory of her words so that she can blame her aid with impunity, punishing him, too, with death and multiplying the fatalities that cascade from her own ethical failure. The chain of miscommunication and arrogant abuses of power leads back to Elizabeth, but her rhetoric and her position allows her to pass along the assignment of blame.

What could be more relevant after eight years of George W. Bush’s administration, which accustomed Americans to leaders who shirked responsibility and twisted their own words to reflect new meanings when it was expedient? Who can forget the absurdity of that “Mission Accomplished” banner draped over the stacks of that war ship, as a flight jacket-clad president preened with false victory, and then soon rescinded his actions as though they never happened?Schiller’s play and Lloyd’s production let us wonder if history has evolved at all from Elizabeth’s machinations 500 years ago.

If Mary Stuart’s ending leaves us cynical about the ethics of poorly exercised power, Lloyd’s production nonetheless offers moments of brilliant abandon and hope in the most unlikely moments and places. In the second-act opener, as one of Mary’s many male confidants promises they’ve figured out how to stage her escape, she finds herself outside her tower for the first time in years. She and her nurse, standing in a courtyard, get caught in a downpour, represented by water cascading from the flies and covering the stage floor with lush pools of rain.

McTeer raises her face to the “rain,” reveling in its sensuality as it drenches her clothes and skin.Her fabulous commitment to the moment lets the audience feel her wondrous freedom; you can almost sense the freshness of the air and the cleansing effects of the water as Mary absorbs it with physical and spiritual hunger.

This moment continues to stick with me days after I saw the production (5-2-09), turning my memory of a play about one queen executed by another into an image of freedom from the cruelties of history and the impossible contradictions of female gender and power.

McTeer and Walter say that audiences have been so convinced that the two actors hate one another, they stage their curtain call to represent their mutual affection. After they take their separate bows, they put their arms around one another in a warm embrace and exit the stage holding hands.

Both women have been nominated for Tony Awards, and will compete in the June ceremony. But the Times reports that McTeer and Walters don’t care about the outcome, and are already chatting about what they’ll wear to the awards show. It’s not who wins, they agree—it’s how much they enjoy playing the game Mary Stuart so generously provides them as women.