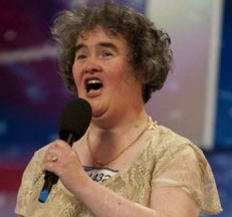 But of what, might be the question? Mark Harris, one ofEntertainment Weekly’s best columnists (who happens to be Tony Kushner’s husband), remarks this week (5-8-09) that Boyle’s internet success sounds a hopeful note in an otherwise cynical and self- serving celebrity scene. Here’s a woman who attests that her only dream is to sing professionally. As Harris notes, she doesn’t want to be a “star”; she only wants to do what she loves.

The friend who sent me the link to the Boyle’s YouTube clip (www.youtube.com/watch?v=RxPZh4AnWyk) added a note that extolled the virtues of the event, suggesting how hopeful it made her feel in an historical moment in which there’s so much to worry about. Why has this ordinary woman from a tiny village in the UK inspired so much affection and adoration? What does she say to or about people that encouraged her video to be seen by over 120 million people around the world?

What does it mean that the horrible, churlish deprecation of the Britain’s Got Talent audience changed to frank admiration and wild enthusiasm once Boyle sang through a few bars of “I Dreamed a Dream” fromLes Mis? That art triumphs over the “misfortune” of homeliness and poor fashion sense? That faith and desire are really all that matters to raise someone from the relative boredom of a daily life spent caring for an aging mother into the unexpected adulation of an anonymous public more typically hungry for the facilely cutting humiliations of cruel reality show hosts like the despicable Simon Cowell?

I was as moved as the next viewer by watching Boyle sing on my computer screen. Most touching was Boyle’s faith in her own ability, her innocent certainty that nothing but her voice—not her appearance, her age, her hair, her infamous (and now tweezed) bushy eyebrows (see the “before” photo, above left)—would matter once she opened her mouth to sing.

I was moved by Boyles’s ingenuous resilience, her uncoached, open answers to Cowell’s miserable, insinuating questions, and her apparent belief in the essential goodness of man (well, “men”). Her delight in her public conquest, and her subsequent demurrals of anything but happiness about not being immediately booted off the show, are, as Harris suggests, refreshing anti-celebrity behavior.

Does it matter, then, that she was whisked off by a “family friend” to have her hair styled and colored, and those notable eyebrows plucked (see “after” photo, above right)? What to make of this “mini-makeover”?Does it matter if her unstylish frock will now surely be replaced with more fashionable clothing, as more recent photographs of Boyle suggest she’s been urged to purchase? Will her voice sound as pleasing if her looks are more conventional? Or was it the incongruity of the package and the voice that created the magic the first time around?

Was the television audience shamed by its knee-jerk judgment of Boyle’s appearance once she began to sing? Was its uproarious response to her song expiation of its own guilt at how they had already dismissed her? Harris says people are now acting toward her like she’s a “cute pet hobbit” to be infantilized and exoticized. I think she’s being treated like a “wild child,” someone who’s lived outside of civilization and its restrictive customs.

Harris reports that some spectators think her refreshed appearance will rob her of the authenticity that prompted her initial appeal. God forbid she should look like any other conventionally made-up and neatly dressed middle-aged woman and still sing like an angel. What would happen to the media hook if that were the case? No one cares about conventional middle aged women, whether or not they can sing so well.

The sexism—not to mention the “looks-ism” and ageism—of spectators’ response to Boyle’s audacity (as in, How dare a woman who looks like her think she could compete on a show like this?) makes her triumph bittersweet. On the basis of watching her sing, reading about her in People Magazine, and catching one or two minutes of television interviews after her appearance, Boyle seems to me like a nice enough, perfectly ordinary woman.

Her bravery and desire has thrust her into extraordinary circumstances from which she’ll most likely not escape unharmed. I don’t relish watching the media work its black magic, turning Boyle’s fairytale into something sordid and distasteful, something that will no doubt soil what appears to be her genuine desire to make herself and others happy with her voice.

Perhaps she should have stuck to singing in the shower.