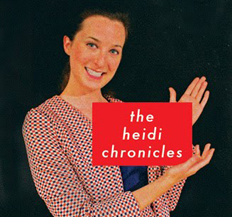 Wendy Wasserstein’s 1989 Pulitzer Prize-winning play has become a history piece, representing her view of the progress of American feminism from its beginnings in the late 60s to its solidification and—by her lights—waning in the mid- to late-1980s. Seeing the play through a 2010 vantage point makes me feel more generous toward Wasserstein than I did when I saw the 1989 Broadway production, which enraged me with what I considered its dismissal not only of feminist accomplishments but of any kind of vital feminist future.

The Princeton Summer Theater production of The Heidi Chronicles, directed by R.N. Sandberg and ably performed by a company of mostly graduated Princeton seniors, does an excellent job of tracking the play’s contemporary relevance. The set’s stenciled outlines of dates and places keeps the spectator abreast of the passing of time and social mores, from the 1962 high school dance at which Heidi meets Peter, who eventually becomes her best (gay) male friend, to the 1989 New York loft where Heidi ends her journey with her adopted Panamanian baby. In this production, smart acting and complex characterizations keep Heidi’s choices relevant, perhaps especially for young women embarking on their own journeys, replete with complications similar to those Wasserstein’s heroine faces.

Rebecca Foresman plays Heidi Holland as first and foremost a smart, even opinionated woman, who clearly thinks about each choice she makes throughout the play. More often, Heidi is played as a cipher, a woman buffeted by history instead of choosing her way through it. Director Sandberg and Foresman instead put Heidi in the center of the play’s action. For instance, in the first act’s Ann Arbor consciousness-raising scene, in which Heidi is typically placed—awkward, uncomfortable, and wary—outside the earnest circle of women, this production puts Heidi among the others, watching with insight and intelligence. When she finally resolves to share her own experience, Foresman makes that choice with force and conviction, presenting Heidi as a clear and willing participant in shaping feminist understandings of women’s lives.

That the scene still caricatures 1970s CR groups indicates the tight construction of Wasserstein’s text. But the Princeton actors—including Veronica Siverd as a much warmer and fuzzier lesbian physicist Fran, Olivia Stoker as a very thoughtful and less bubble-headed Becky, Heather Mays as the ever-embracing hopeful housewife Jill, and Dominique Salerno as the mercurial, shape-shifting Susan—push against its stereotypes to make the scene a moving statement of feminist solidarity, something still rarely seen on American stages.

In fact, feminist energy, warmth, and companionship thread through this production, and take the sting out of Heidi’s Miss Crane’s school speech in the second act, which seems to blame other women for leaving her feeling stranded. Even in the baby shower scene, in which all the women but Heidi and Susan seem on their way to pregnancies, the women end their moment together on the downstage apron in a way that mirrors the solidarity of the 1970s CR meeting.

I was struck, in this production, that the play can offer these affirming representations of women supporting one another through history. Watching Siverd, Mays, and Stoker play multiple women characters underlined that history might change around them, and their stories might change along with the choices they make, but the women’s very presence and connection to one another stays constant and somehow true. Their multiple-casting (and Daniel Rattner’s nice turn as various subsidiary men) grounds Heidi’s picaresque tale.

Salerno’s portrayal of Susan makes the solidarity coloring each of the play’s vignettes especially poignant. Susan is Heidi’s foil, the modern feminist who changes with the times, adopting each passing trend with verve and energy but never with continuing commitment. Susan transforms herself from an eager and aggressive heterosexual, rolling up her skirt at the school dance to seduce the guy who can twist and smoke at the same time, to the feminist shepherdess on an all-women’s dude ranch in Montana, to an MBA-bearing Hollywood television producer who creates a show about three women in a loft in Houston that becomes wildly popular.

That Susan finally declares she’s “not political anymore,” and that she doesn’t care how many people she’s been still makes me wince. But despite Susan’s opportunistic embrace of the zeitgeist, Salerno plays her as genuinely warm and always, in her way, supportive of her BFF Heidi. Salerno as Susan puts her arms around Heidi’s shoulders, touching her and other characters with honest physical warmth that takes the sting out of what Wasserstein writes as Susan’s ambitious excess. This is the first production I’ve seen in which Susan is likeable, and in which her choices make real sense.

Susan is the play’s alpha female. Stoker plays the younger Denise with casual bite; her tossed off “I did women’s studies at Brown” comment in the baby shower scene indicates the entrenchment and de-fanging of feminism in the academy and introduces the social presumptions of third wave feminism. In this production, Heidi is the one who “keeps the faith” (the slogan proudly announced up-center, in the middle of the set, throughout the production). Heidi’s feminist humanism grounds her and her choices; as played by Foresman, she actually seems like a smart, thoughtful woman with staunch beliefs.

Foresman gives her an innate and persistent intelligence that renders her a worthy guide through her own life’s story. For example, I’ve never seen a production of the Chronicles in which Heidi is convincing as an art historian. Here, the feminist art history lectures that begin each act are actually interesting and informative in Foresman’s authoritative delivery, and establish Heidi as a professor and scholar with something to say about art, rather than a woman who apologizes for and undercuts her own intellect. Of course, that very intelligence makes her bitter Miss Crane’s school speech a bit unbelievable; how could a woman as smart and accomplished as Heidi truly measure herself as “worthless” against women in the locker room at her gym who she describes as striving and frankly silly?

Still, Foreman’s layered and nuanced portrayal made me want to continue following Heidi’s journey, and made the second act’s scenes more complicated and compelling. Heidi’s anger at how Peter (Tyler Weaks) and the redoubtable Scoop (Shawn Fennell) talk over her in the “Hello, New York” television segment is palpable. Her position between the two men is sharply drawn in this production. Fennell plays Scoop as wily but charismatic, a man who recognizes Heidi’s potential and knows he can’t live with a woman as competent as himself. Weaks plays Peter as less campy and sarcastic than actors sometimes portray him, giving him a soft, sweet aspect that complements well with Foresman’s sharp, professional focus.

In one of the play’s most objectionable scenes, Heidi visits Peter’s pediatric unit at the hospital to donate a box of books and albums and to tell him she’s leaving New York to teach in Minnesota. Typically, Peter’s fury at her departure trumps Heidi’s choice to pursue her career. In this production, I was still irritated that Wasserstein ennobles gay men’s struggle with HIV/AIDS over women’s fight for equality—why should they be rendered competing activist movements? But in Foresman’s portrayal, Heidi doesn’t apologize for her choices, even though she decides to stay. The scene paints Peter and Heidi as one another’s relations, underlining that it’s possible to create kinship systems outside of the nuclear family, heterosexual norm.

Heidi’s final encounter with Scoop—the voluble Jewish magazine editor she loves with deep ambivalence and finally, a healthy, wry distance—isn’t wistful in this production. Foresman and Sandberg clarify that Heidi likes the choice she’s made to favor her work; her adopted baby textures, rather than centers, her life. The production’s final image shows Heidi sitting in a rocking chair, literally balancing her baby and her book manuscript in her lap, holding her pen in her mouth as she rocks the child and reads her galleys. This picture of a feminist life as a happy balancing act tempers what too often becomes a romantic concluding image of a woman finally fulfilled by adopting a child.

Watching this production of The Heidi Chronicles, I was reminded how few popular mainstream plays exist about feminism. Even so, I wondered, as I watched, whether Heidi is a play about feminism, a feminist play, or a play that tells the story of a generation through one woman’s experience. Regardless, I’m delighted that the Princeton Summer Theater gives us the opportunity to think along with this smart, fun production, even as we enjoy Wasserstein’s sharply funny portrait of the woman she creates as our beguiling guide through our recent, collective past.

1 thought on “The Heidi Chronicles at Princeton”