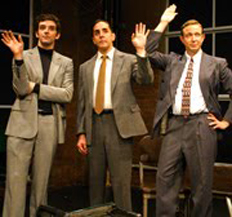 Gay plays, as they’ve proliferated and mainstreamed over the last 10 years, tend to address relationships between lovers, friends, and family. Plays by and about gay men often delve into sexual conquests and disappointments; the more exploitative ones use nudity to draw audiences and encourage a prurient, if fun, spectatorial pleasure. Plays by lesbians, which thanks to gender discrimination remain relatively fewer than those produced by or about gay men, tend to be more relationally based, dwelling on family dynamics and the domestic sphere.

I’m overstating grossly here to underline how refreshing it is to see a play about gay (or “homophile”) activism in the 1950s as the focus of an evening at the theatre. Written by Jon Marans, The Temperamentals tells the story of Harry Hay, considered by many historians to be the father of the U.S. homophile movement, who doggedly persuaded men to sign the manifesto of what he called The Mattachine Society. The Society was named after a troupe of medieval dancers who only appeared publicly in masks, an apt metaphor for closeted homosexuals of the ‘50s. Hay was the first to publicly call gays and lesbians a “minority” and to argue for homosexual rights along the lines of what would soon become the civil rights movement.

As an event happy to succeed by telling its important story, this production’s one acquiescence to commercial pressure is director Jonathan Silverstein’s casting of Michael Urie (of tv’s Ugly Bettyfame) in one of the supporting roles. Although some of his tv character’s flaming gestures and flamboyant sarcasm seeps into his performance as Rudi Gernreich, Harry Hay’s young Viennese-Jewish clothing designer boyfriend, Urie’s acting is subtle, generous, and sincere, bringing depth and intimacy to the complicated exchanges between the two lovers.

In fact, all of the acting dignifies a slightly too earnest script. Marans skillfully describes the difficulties of being the least bit “out” and homosexual in the early 1950s in the situations he sketches. For instance, although he was one of the first gay proselytizers, Hay was married (to a woman) through much of his initial activism. And while he was aggressive about asking famous but closeted men (like film director Vincent Minelli, who makes a campy, sad appearance as a character here) to sign on to his manifesto, Hay’s own paranoia made him reject Rudi’s more public gestures of affection, so terrified was he of inappropriate display. The Temperamentals’ perhaps most important contribution is its portrayal of just these contradictions and the social disapprobations from which they rose.

As it traces the beginnings of a language for gay activism (well before the word “gay” was commonly used to name homosexuals), some historical contrasts become amusing and poignant. For example, Hay and his few faithful compatriots—energetically portrayed by Tom Beckett, Matthew Schneck, and Sam Breslin Wright, who impersonate an array of good buys, bad guys, and the occasional woman, lesbian, or mother—discuss whether or not gay men should be allowed to get married . . . to women. One of the few lesbian voices in the play belongs to a radical butch who says she’d never marry, unless it was to a woman. The script deftly highlights historical shifts in its construction of these conversations, as it leads the audience to understand how the course of events and the contours of activist discourse have changed over the last 50-odd years.

Although gay news outlets, bloggers, and commentators have lately expressed disappointment in President Obama’s failure to follow through on his campaign promises about LGBTQ issues, watching The Temperamentals is a happy reminder that progress has indeed been made for gay men in U.S. culture and politics, despite what the movement still needs to accomplish. For example, when Rudi networks his way into an apprentice position with a noted, publicly visible clothing designer, the man tells him in no uncertain terms that Rudi requires a wife by his side, implying that the field’s obvious homosexuality needs to be defended by the normalizing choice of fake marriages. A spectator need only think of the overt queerness of a tv show like Project Runway to note how far gay male visibility and acceptance—in fashion design alone—has come since the early ‘50s.

Throughout the story, Rudi pressures Harry to leave his wife, Anita. Ironically, when Harry finally gathers the courage to tell her that he’s a homosexual, Rudi finds himself marrying a woman coincidentally also named Anita. The moment’s sadness, necessity, and ubiquity resonates as a poignant reminder of what gay men in the 1950s gave up to lead socially and professionally successful lives. Vincent Minnelli, who’s played as a limp-wristed, lisping, utter stereotype of a gay man who couldn’t pass for heterosexual if he tried, explains to Harry and Rudi that his career took off when he married Judy Garland.

Director Silverstein leads the audience to see that while from a contemporary perspective, these men would never be mistaken for straight, the persistence of the closet, and the social contract that enforced a purposeful refusal to see sexuality as anything but heterosexual, required the kind of visible and public declarations for which Hay fought. What queer theorist Eve Sedgwick would by the 1990s call the “open secret” of homosexuality clearly operated in the 1950s as a way to repress progressive public discourse about sexual fluidity and choice. The men Hay approaches to sign his manifesto believe in his work, but they can’t risk their lives and livelihoods by lending it their signatures.

Even hard won declarations of agency were often foiled. In one scene of The Temperamentals, the working class, police officer boyfriend of one of Hay’s friends is entrapped in a public bathroom by another police officer, who cruises him for sex then arrests him. While most men tricked in these situations pled guilty, Harry persuades this man to insist on his innocence. When he does, and the judge decrees him not guilty, the triumphant activist moment is defanged and neutralized when the press refuses to cover it. The moment goes unnoticed, unwritten as history that matters.

Many of Hay’s inner circle are portrayed as racist and anti-Semitic in The Temperamentals, despite their willingness to fight for their own homosexual rights. Maran does a nice job complicating identity politics with such contradictions, as these men fail to find common cause with other oppressed people unless their struggles provide helpful models. That Rudi is Jewish and his family dead at Auschwitz gives Harry a built-in analogy through which to ply a gay rights manifesto. But a general lack of political affiliation with people unlike him seems to weaken Hay’s cause, just as it would decades of subsequent too-white, too-middle-class, and too-assimilationist LGBTQ activism.

Although Marans’ script covers important moments in 1950s homophile activism, the characters mostly appear to be ciphers or stereotypes, mouthpieces for history rather than embodiments of people who are more than cogs in a predetermined wheel of time and social change. And although the script details the impossible contradictions of closeted gay life in this period, Marans lets a preachy didacticism creep into his writing, particularly in the second act. More judicious editing for length and tone would enhance the play, whose potential is signaled by the five actors and Silverstein’s sensitive, fluid direction.

The theatre at the Barrow Group space on 36th street in which I saw the production (on August 7, 2009) was set up with spectators seated on two sides of the stage facing each other, raked up from the square wooden platform that provided the playing space. The surrounding audience seemed to embody the ever-present hegemony that enclosed Hay and his gay friends. Silverstein moved the actors through various locations using only six wooden chairs and a few props (a telephone, a clarinet, some pieces of clothing), cutting away extraneous visuals and business to focus on their human interactions.

The actors succeeded in finding the humanity of men (and the occasional woman) struggling to make sense of lives few words described in the 1950s. Even if some of the subsidiary characters are caricatured by the script, Beckett, Schneck, and Wright draw them sharply, with respect and care for what they represent in the history told.

As Hay, Thomas Jay Ryan provides a square-jawed performance, finding an arc of emotional growth in a man who begins by protesting (too much) his masculinity, only to begin a second movement 25 or so years later, this one called The Radical Fairies, in which he rejected conventional maleness for the free-flowing garments and gestures of men who refused gender constrictions and embraced spirituality.

Ryan finds generous ways to communicate Hay’s necessary contradictions, as his radicalism and conservatism bump up against each other through the period The Temperamentals covers. With Michael Urie as his sympathetic if bemused, ambitious but frustrated lover Rudi providing a lovely, warm emotional grounding for Hay’s barnstorming, Ryan delivers on the sense of promise in the pioneer’s vision.

Even though its script devolves into platitudes toward the end, The Temperamentals offers a necessary, gentle reminder of how difficult it was for two men to create physical, emotional, sexual, and political spaces in which to be together not so very long ago. For that, it’s worth celebrating—and seeing. It closes in New York on August 23rd.

3 thoughts on “The Temperamentals”