With fall well underway, and my theatre-going still reduced by my new commitments as Dean of the College, fiction remains my go-to pleasure (along with television, but more about that in another post).  Here are eight books I enjoyed in the late summer and early fall, in the order in which I read them: 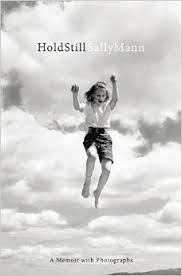 Hold Still, by Sally Mann. This fascinating memoir is by the noted photographer who ran afoul of “community standards” in the 1990s, around the time of the NEA debacle, when she published a book of photographs of her children and family, many of them nude.  A public firestorm about abuse and exploitation ensued, even though Mann intended nothing of the sort.  She’s a thoughtful writer, and the book is as much about her upbringing in Lexington, Virginia, where her family has a large farm, as it is about that one moment of public notoriety.  But her chapter on the political events her book of photographs inspired is very smart about their personal and social fallout.  Her chapter here on race is a bit more troubling, as she takes black men as the subjects of intimate photographs, and uses her time with them to inquire into their differences from her.  Mann is politically well meant and doesn’t shy from choices others might find suspect.  The memoir begins to feel long and her prose a bit too purple, but Mann’s meditations about art and the genesis of a photographer’s “eye” are smart and often moving.  And the photographs that illustrate the book make her prose seem like long, illustrative captions. 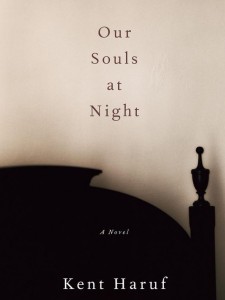 Our Souls at Night, by Kent Haruf. Haruf’s novel boasts beautiful, taut, terse writing as he narrates the story of two elderly neighbors, Addie and Louis, who decide to spend their nights together so that they won’t have to be alone.  Their kindness allows them to open their hearts to one another, and to the woman’s grandson, a lonely boy who comes to stay with her when his parents separate.  But Addie’s bitter son and the couple’s disapproving neighbors interfere in their relationship, allowing Haruf (who died shortly after this book was written) to paint, as usual, a poignant illustration of small-minded little towns that constrain people who have big hearts and open souls. 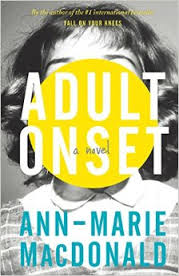 Adult Onset, by Ann-Marie MacDonald. A stream-of-consciousness novel about Mary Rose (or MR, or “Mister”), a middle-aged lesbian writer and mother.  The central story takes place over the course of a week when she’s alone with her two children, one adopted and the other the biological child of her partner, a theatre director who’s out of town.  Memories of trauma and abuse surface, which prompt flashbacks and a layered narrative structure, as MacDonald probes and parses MR’s relationship with her removed and emotionally complicated parents.  I love MacDonald’s work, but this book gets a bit repetitious and lacks neat symmetry among the various voices she adopts to tell the story:  the third-person, which lets us look into MR’s past; her mother’s recollections, which turn out, later in the book, to be MR’s creative rewriting of the story; and long excerpts from MR’s young adult novels, in which she tries to work through her personal history through fiction and fantasy.  Catching on to the stylistic and narrative shifts of voice and perspective take a moment, and too often forestall emotional connection and build.  The structure means to be non-linear and perhaps experimental, but winds up interrupting the narrative flow with stylistic distractions.  I’ll look forward to McDonald’s next book, though, as her take on lesbian lives is always revealing and vivid. 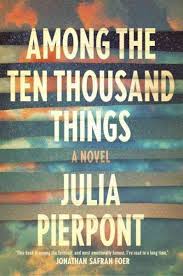 Among the Ten Thousand Things, by Julia Pierpont. This debut novel is another about a dysfunctional, white, privileged family.  It’s a classic betrayal story, which begins with a wrenching bang when two young children find a collection of letters left for their mother by their father’s mistress.  Pierpont tells the story of the fall-out from the shifting perspectives of the children and the parents, in a rather free-form fashion that also moves forward and back in time.  None of the characters are sympathetic; the now betrayed wife, for example, was her husband’s mistress when he was with his former wife.  But Pierpont does illuminate how random events come to form the marrow of who we are.  The interlude in the middle of the novel rather unexpectedly looks forward to the end of the story and the end of the characters’ lives.  It throws a different light on events when she picks them back up in the real-time of the novel’s second half.  Ultimately, I didn’t buy the hoopla the book inspired in other reviewers, but I wasn’t sorry I read it.  At the level of the sentence, Pierpont manages some beautiful writing and acute observations. 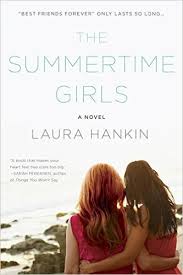 Summertime Girls, by Laura Hankin. Full disclosure:  Hankin was one of my very first students at Princeton, when she took a seminar with me on theatre criticism in 2008.  I’m a big fan of her work as a writer and as an actor.  Her debut novel hits all the right notes as it atomizes the complications of female friendship.  Hankin uses a parallel plot structure to explore the lives of two pairs of women friends from different generations who adore one another but can’t quite modulate their high emotional expectations.  Both pairs disappoint one another gravely, and must carefully pick their way back to one another over the detritus of hurt and blame.  Hankin gives her characters important commitments to social justice in Haiti, to the environment, and to the arts, as one of the lead characters is a singer/songwriter.  She manages to draw a compelling portrait of how difficult it is for women to maintain emotional connections when work, men, and competing commitments intervene. 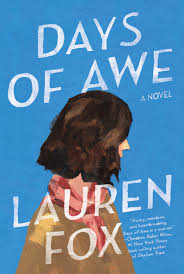 Days of Awe, by Lauren Fox. Fox is also a former student, from when I taught at the University of Wisconsin-Madison.  I’m a big fan of her writing and her latest book is no exception.  The novel is beautifully wrought and mordantly funny, even while it examines the effects of loss when a woman grieves the accidental—or possibly intentional—death of her best friend.  Fox is adept at getting to the granular level of a moment and of relationships, and observing how the micro-moments influence the macro.  Her humor is often unexpected; I found myself laughing out loud in places that were otherwise quite sad.  Ultimately, the book is hopeful about our desires and our need to soldier on, even when going forward seems unimaginable.  Fox is also terrific on relationships between mothers and daughters.  Here, the protagonist’s mother is a Holocaust survivor who judges all subsequent relationships according to whether she thinks a person would hide her Jewish family in an attic if such protection became necessary . . . very well-observed. 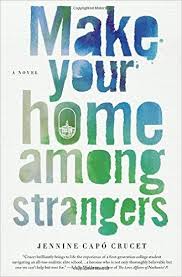 Make Your Home Among Strangers, by Jennine Capó Crucet. A wrenching story of Lizet, a Cuban-American young woman from Miami, set during the Elian Gonzalez crisis (here called “Ariel”).  Lizet applies to and enrolls at a liberal arts college in upstate New York without her parents’ knowledge or permission, receiving a full scholarship for “minority” students that enables her attend.  The elegiac story—framed by the adult Lizet looking back on this foundational moment in her life and in the lives of Miami’s Cuban expatriate community—considers the ways in which a woman like Lizet can never be “at home.”  Once she leaves Miami, she’s forever marked as “ethnic,” exotic, or simply different among the mostly white, mostly wealthy students she studies among, and forever marked as a “too smart” traitor by the family and friends she’s left behind.  Crucet captures this painful balancing act beautifully.  Two-thirds of the way through, the narrative becomes just a bit static, as she details the Miami Cuban-American community’s response to Ariel’s forced removal from his uncle’s home by a U.S. government determined to return him to his father in Havana.  Lizet’s mother, Lourdes, who feverishly works to keep Ariel in the U.S., comes to symbolize the vexing status of home(s), as she rejects her own daughter to embrace Ariel’s plight.  Lizet’s choice to find another “home,” always both impossible and necessary, strikes at the heart of the tensions experienced by smart, first-generation students of color from low-income backgrounds recruited to elite universities, who struggle to acclimate to unfamiliar surroundings without losing hold of their roots. 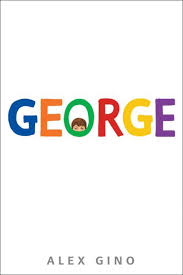 George, by Alex Gino.  This young adult novel created a stir this fall as one of the first books about a young transgendered person to receive a lot of public attention.  George, born a boy, sees herself as a girl named Melissa, but is afraid to persuade her family and her peers to see her as she sees herself.  Through a school production of an adaptation of Charlotte’s Web, George practices playing Charlotte with her friend, Kelly, inhabiting the world as the kind, wise, feminine soul George feels herself to be.  Although her teacher refuses to cast her as Charlotte, George and Kelly subvert the production in a last-minute gambit that helps others see George as she wants to be seen.  Gino’s writing is empathetic, telling the story from George’s perspective and capturing the painful nuances of being a 10-year-old trying to resist gender norms.  Although the novel might be more pedagogical than elegant, its activist gesture is important and pioneering.  Gino paints George’s desires and challenges through  precise, evocative interactions with her friends and family, and captures the yearnings of her inner life in ways that make her growth poignant and topical.