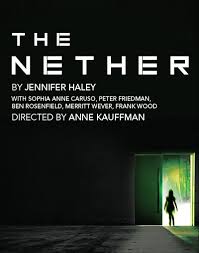 Jennifer Haley’s The Nether is a play of ideas whose plot shifts between plateaus of existence in a near-future.  The Internet has morphed into something called The Nether, in which more and more people develop parallel “realms” where they live alternate realities.  As characters spend more time in the Nether than they do in “real life,” the distinction between a fleshy reality and a persuasive virtual realm begins to blur, bringing along attendant moral issues about the substance of bodies and their effects.

In a bleak, oppressive interrogation room, Detective Morris (Merritt Wever) interviews Sims (Frank Wood), an effete gentleman who continually slips Morris’s attempts to call him a criminal because he procures under-aged girls for interested men to exploit sexually and romantically in the Nether.  The place he adjudicates is called The Hideaway, an elegantly constructed, faux-19th century world full of its own rules and regulations.  The “people” who roam this realm are avatars, virtual substitutes for the anonymous strangers who enliven them.  In the Hideaway, men like Woodnut (Ben Rosenfield) seek sex with girls like the virginal but strangely seductive Iris (Sophia Anne Caruso).  Sims (or Papa, as he’s known in the Hideaway) refuses to accept Morris’s claim that the sexual violence he facilitates across the virtual divide is harmful.

Director Anne Kauffman’s staging for MCC at the Lucille Lortel Theatre beautifully realizes some of the play’s theatrical challenges.  How can a production represent the thin border between real life and the Hideaway, especially when the play’s moral quandary concerns the shadowy interactions of pedophiles who pay to spend with young girls?  How to treat those characters, who are avatars (according to the script’s logic), but who present to us as real men and pre-teens?

Kauffman and her talented designers create an overlapping, cohabiting sense of space and time.  Morris conducts her investigation at a table with two chairs in a gray, dungeon-like room with heavy wooden doors and cold light (by designer Ben Stanton) that evokes a palpable sense of entrapment.  When a sliding barn door opens on to the Nether’s Hideaway, by contrast, shafts of what seem like warm, natural light tumble across Iris’s red and pink bedroom.  On the opposite side of the stage, another panel opens to reveal what looks like a thick grove of trees, flourishing under what seems a warm summer sun.  Although the light thrown here is somehow too bright and perhaps too warm, which signals its falsity, the Nether couldn’t seem more appealing.

That the real and the virtual are recreated in the fantasy space of theatre deepens Haley’s inquiry into the material effects of imagination.  To maintain his carefully nurtured balance of power, Sims requires his clients not to become too attached to his girls.  When intimacy beckons, he encourages Woodnut to “kill” Iris with an ax.  Iris reassures her reluctant suitor that she always regenerates after her “death,” and hands him the ax with seductive magnanimity.

Playwright Haley, through Detective Morris, questions whether the perversity and violence wrought in the not-real should be legislated in real life, where its effects would certainly be more consequential.  She asks us to consider the relationship between imagination and action, at a time when people are becoming increasingly enticed by the virtual.  (Present-day parallels are posed subtly but clearly here.  The 2013 case of the “cannibal cop” comes to mind, in which a man was prosecuted for internet posts in which he described his desire to kill, cook, and eat women, though whether or not he intended to follow through, in reality, wasn’t clear.)

In the play’s imagined future, more and more people choose to become “shades,” whose bodies are suspended on life support while they go to “live” in their preferred virtual realms.  In fact, Morris’s investigation seems fueled by moral righteousness, until we learn that her own father has chosen to become a shade, leaving her without his attention in an progressively more unsatisfying real world.  Her crusade to bring the pedophiliac Sims/Papa to justice becomes personal, as well as political, muddied by her own complex desire for both retribution and connection.

Doyle (the always terrific Peter Friedman), whom she’s enlisted (or blackmailed) to inform on Sims, is a mess of a man who’s lost all perspective.  That he prefers to live in the Nether astounds Morris.  But by the play’s end, his attraction to beauty, to an always replenished perfection, and especially to a literally blind love, which allows you to play out whatever you desire without judgment, presents its own attractions.

I won’t spoil the revelations that ground the play’s fascination.  Suffice it to say that parallels between the Hideaway and the detective’s interrogation room lock together in surprising, deftly drawn ways.  Haley poses complicated and difficult questions through tight narrative plotting and inventive theatricality.

Wood is terrific as Sims/Papa, moving elegantly between his shifty persona in the real and his oily supremacy in the Hideaway, where he serves a proudly patriarchal function.  Wood and Friedman never fail to compel, given how they draw characters in a gesture, a grimace, or a precise vocal choice.  Friedman is pathetic as Doyle, but his abjection is tempered by his mournful yearning.  Caruso, as the pivotal Iris, is perfect in a role that could have been unsavory.  (The young actress performed as Brigitta Von Trapp with Carrie Underwood as Maria in the live Sound of Music on television.)  Caruso’s performance has a bell-like clarity and appeal, her youthful earnestness shaded with just a bit of sexual knowingness.

Merritt Wever, sadly, seems strangely discomfited as Detective Morris.  Wever’s typical wry humor—much in evidence in her comic, poignant performance as Zoey on the Showtime series Nurse Jackie—is suppressed here for a wounded toughness that never quite convinces.  Her physical and vocal choices seem slightly off; she’s loud and brash when she might be more menacing and insidiously threatening.  She’s quiet and yielding when force seems more appropriate.  She looks down and away from her acting partners when she should be confrontational.

Someone with a more powerfully glacial presence—an actor like Cherry Jones, or Ruth Wilson, or Jessica Chastain, women with some powerful secrets of their own to wrangle as they manage their probing intellects—might have been more persuasive as Morris.  Instead, Wever’s more emotionally diffident performance goes by in blur, which is a waste of her talent and leaves a hole in an otherwise compelling production of a very good play.

The Nether, at the Lucille Lortel Theatre, produced by MCC Theatre, through March 14, 2015, and with a different cast and director, produced by the Royal Court Theatre, at the Duke of York’s Theatre, London, through April 25.