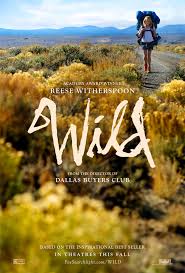 Reese Witherspoon is exceptional in Wild, the film adaptation of Cheryl Strayed’s memoir about walking alone on more than 1,000 miles of the Pacific Coast Trail.  The 2013 book is surprisingly gripping.  Strayed narrates her hike—which she began with little preparation and no training—on a trail that lines the rugged western coastline, moving from the deserts of the south in California to the snow-covered peaks of the north in Oregon.  She sets out on this endurance test to return to something true about herself, after her mother’s untimely cancer death and her own bout with grief-inspired drug-abuse and sexual promiscuity.

Capturing a mostly interior monologue on film could have been daunting, but director Jean-Marc Vallée (Dallas Buyers Club) respects Witherspoon’s ability to convey Strayed’s transformation from a troubled drifter into a woman of strength and determination who, at the end of her journey, finally has the grit and knowledge she needed to embark on such a fool’s pursuit in the first place.  Following the book closely, Vallée begins in Strayed’s hotel room near Death Valley, where she prepares for her hike by stuffing three times the supplies she needs into her pack.  Staggering under the weight of what the hikers she meets call “The Monster,” she nearly expires in the desert heat, clocking a paltry five or eight miles a day for her first week.

Flashbacks and quick cutaways intersperse her troubled memories with Strayed’s narrated interior monologue as she moves through a subtly shifting natural landscape.  Cheryl’s mother, Bobbi (a remarkable Laura Dern), was abused by Cheryl’s drunken, violent father, but never wavered in her belief that life was good and that she wouldn’t change a thing.  Raising Cheryl and her brother, Lief (Keene McCrae), on her own, Bobbi provided the searing light and faith from which an older, more sophisticated and dubious Cheryl turned away and came to doubt.  Bobbi starts college as Cheryl is half-way through, embarrassing her daughter even as Cheryl was secretly proud of her mother’s confidence.  And Bobbi was never bowed by her family’s poverty because she found her own emotional resources more than enough, even in the face of her husband’s fists.

Dern plays Bobbi as a woman who adores her children and her life, who refuses to let regret, fear, or resentment color her hope for what her children will become and her faith in basic, simple goodness.  Vallée films Dern dancing in the family’s tiny kitchen, seducing her children to join her through the sheer force of her happy, in-the-moment love of music, and cooking, and the ideas she’s absorbing at school.

Bobbi’s fast death from cancer at the age of 45 destroys Cheryl and her brother.  Cheryl purposefully wrecks her marriage to Paul (Thomas Sadowski, clear and stalwart as the jilted but loyal ex-husband) and begins smoking, snorting, and finally shooting heroin and having anonymous sex, persuading herself away from romantic or emotional attachments for fear of being abandoned once again.  When she finds herself pregnant and doesn’t know who the father might be, she’s jolted into trying to right her course.  In flashback scenes, her friend Aimee (the wonderful but here underused Gaby Hoffman, of Transparent), listens and watches with concern as Cheryl continues to falter.

The flash-back and -forward structure of Wild keeps the narrative fluid, but fits it together securely as Cheryl’s backstory fills in.  As she navigates the glorious but forbidding trail, her ignorance is at first palpable.  She doesn’t have the right kind of fuel for her portable stove; her boots are too small, so they rub her feet raw and break her toenails; she’s got bruises on her shoulders and waist from the weight of her pack; and she’s terrified by something crawling in her sleeping back that turns out to be a caterpillar.  Scenes of her ineptitude make her endearing; without them, it might have been harder for Vallée to get the audience to empathize with a woman it’d be easier to judge as amoral or even criminal.

Witherspoon, too, makes it difficult not to like and side with Strayed in her journey back to a stronger, more resilient version of herself.  The actress hides her natural beauty under layers of trail dirt to play Strayed.  On the few occasions Cheryl is able to leave the PCT to shower and dress in decent clothes for a night or two, she looks unrecognizably alluring.  On the trail, Witherspoon plays Strayed with a no-nonsense determination that hides her fear about whether she can walk for three months and 1300 miles through the wilderness alone and whether, at the end, she’ll be any different than she was at the beginning of her trek.  Witherspoon registers each complicated emotion as Strayed finds the backbone that her mother’s cancer took from both of them.  She gradually recalls reserves of bravery that let her walk with her feet wrapped in duct tape when she loses her boots and to tiptoe around a rattlesnake on which she nearly tramples.

Strayed’s thoughtful writing is supplied here in Witherspoon’s voice-over as she walks and melded nicely with moments of Strayed talking out loud to herself along the trail.  Cheryl keeps a journal, in which she wrestles with her feelings.  She writes in the trail books signed by hikers beginning new segments, leaving quotes from famous writers and poets whose names she signs along with hers.  She reads Adrienne Rich, pondering the poet’s meanings.  She reads James Michener, a writer her mother loved whom Cheryl once criticized as middle-brow.  She carries one of his thick novels across miles of trail to redeem her slight against her mother’s striving taste.

Vallée and Nick Hornby (who wrote the screenplay with Strayed) deliver these significant moments on her path back to goodness with a relatively light touch.  Occasionally, the symbolism gets the better of them.  A strange-looking fox appears like a vision to Cheryl when the hike overwhelms her; it becomes her talisman, her mother’s reincarnation, persuading her forward like a benevolent spirit guide.  Aside from two hunters with terrifying bows and arrows strung across their backs, who intimate sexual violence, most of the men Strayed meets on the trail are benign, which is true to Strayed’s experience as she recounts it in the memoir, but seems somehow far-fetched on film.

On the other hand, the film deftly illustrates the more ironic moments of her journey, and conveys without becoming sentimental the kindnesses she experiences.  In one of her more absurd exchanges, Cheryl stands with her huge pack by the side of the road, hoping to catch a ride around a snowed-in portion of the trail.  A reporter—an African American man improbably named Jimmy Carter (Moe McRae)—stops his car to interview her, saying he writes for Hobo Times and doesn’t get to meet very many women hobos.  Strayed insists that she’s not a hobo, that she’s just hiking the trail, although she’s flummoxed when the man asks her where she lives.  Taken with her perseverance, he asks, “Say, are you a feminist?”  To which Cheryl responds, “Of course,” with the righteous indignation of those who think “yes” is the only answer to that question.

That moment, about a third of the way into the film, echoes through the rest.  On one of her supply trips into town, Strayed spots a woman hiker, and greets her with delight,eager to find brief companionship with someone of her own gender.  The women spend contemplative time together, which the film doesn’t allow her with any of the men she meets on the trail.  Their short scenes are lovely and meaningful.

Finally, Wild is about grief and how it derails you, how it makes you howl and fight yourself and everything you’ve lost.  Strayed’s story suggests that it’s possible to find your way back.  In Witherspoon’s spare but bold, minimalist but deeply expressive performance, you feel Strayed begin to hope again.  You see her accepting the kindness strangers extend, and learning again how to trust people and, most importantly, herself.

The lessons Wild imparts aren’t grand, though the scenery (filmed by cinematographer Yves Bélanger) is majestic.  Instead, Vallée, Hornby, Strayed, and Witherspoon find the story’s moral in the little moments, when the portable stove finally lights, when the mush Strayed eats is warm instead of cold, when a stranger with a truck gives her whiskey and a ride to safety, and when she arrives, without fanfare, at the Bridge of the Gods in Oregon and stands mid-way across, reporting on her future as she leaves behind her past.

Those are feminist moments, well worth witnessing in this very good, smart film adaptation of a terrific book.