This beautiful adaptation of Joseph O’Connor’s 2004 novel was devised by Moonfish Theatre, a Galway-based company.  Using a bare stage flanked on two sides by a variety of sound-making devices and visual projection technologies, the six actors move in and out of character roles, as well as singing, playing music, and managing the images and sounds that enhance the narrative.

O’Connor’s Star of the Sea is a sprawling novel about a famine ship crossing from Ireland to America in 1847.  Numerous character arcs interweave and collide, as O’Connor evokes not just the horrors of an Atlantic crossing but also the backstories of the passengers who embark from different social and economic circumstances.  The ravages of Ireland’s Great Famine haunt them all, but its effects on their lives play out differently depending on their stations, with devastating consequences for them all.

Moonfish elects to focus on just several of O’Connor’s many tales:   Mary Duane is a young woman whose life links many of the stories told.  As a girl, she and the boy who becomes her master, Lord Merridith, maintain a warm friendship that evolves into love.  But as Merridith assumes his power and privilege, he’s required to change his affections for his friend into the control of a master over a servant, which he does with ruthless self-concern.  The evil Pius Mulvey later impregnates Mary, then leaves her to become a criminal in England before he makes his sorry way to the ship.  Pius’s good brother, Nicholas, stays behind raising Pius’s child with Mary, after Mary sets sail for America with the ruined Lord Merridith, in whose employ she’s now imprisoned.  And Lord Merridith’s wife marries the landowner because a woman of her class must. 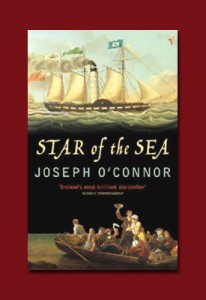 In Moonfish’s treatment, these individual stories matter less than how their theatricalizing makes them a tapestry of collective historical experience.  For instance, Nicholas describes people in Connemara dying from hunger; the scene ends with him jumping from a cliff with his baby in his arms to ensure a quick and less painful death than they’d suffer from starvation.  Although the moment is wrenching and beautifully, it’s only part of the whole story’s fabric and momentum.  Nicholas’s death sits beside Mary’s humiliation, when she’s assaulted sexually on the ship by Lord Merridith, the man she once loved, since their class differences make their relationship impossible but don’t quench his desire for her.  Mary’s assault echoes against the image of Lord Merridith refusing to hear Nicholas’s plea on behalf of the tenants to save them from death. Merridith’s minion insists the man is busy playing cards; we see his silhouette on a screen, his head thrown back in laughter while his people die.

Star of the Sea is performed in Irish and English, though O’Connor’s novel is only in English.  The bilingual production helps non-Irish speakers understand the Irish dialogue by translating snippets in real time.  One of the performers stands at a laptop stage left, looking into the scene throughout the production.  You gradually realize that she’s writing the English words we see projected on a sepia-toned screen meant to resemble a torn sail.  Her handwriting—in two different evocative old-fashioned fonts—tracks the Star of the Sea’s progress toward New York, as well as providing bits of translation written in the third-person while the character talks.  Without using obvious and distracting supertitles, the translation becomes part of the means through which the whole production narrates its tale.

In fact, Irish and English are only two of the many languages Moonfish uses here.  Theatricality becomes its own multiple languages, as visual and sound effects, singing and music underscore and push the narrative forward in their own way.  The performers’ bodies become part of this theatrical speech, each performing several roles, often across gender.  The cross-gender performance is done simply and lucidly, with costume changes that signal a switch in role and gender and not much else.  The lovely, underplayed gender performances resonate more poignantly than more emphatic gender play might have.

The six performers also move the transparencies across the overhead projector to evoke the multitudes on the famine ship, work the sound effects to hint at the wind and the waves, play a violin or mandolin to punctuate the action, and sing a traditional Irish ballad or two to move the story and enhance the mood.

These choices help Moonfish evoke a sense of community and country, rather than only individual lives.  Ideas and emotions become embodied not in a psychologically singular way, but through images and feelings that are created collectively on stage as we watch.  Actors leave the playing space to change a piece of costuming directly off-stage; no curtains separate the wings from the central space or hide the preparatory action from the audience.  Seeing the performers make their transitions and move from one task to the next only enhances the magic of what they create.  We see the theatrical apparatus at work at the same time that we’re captivated by what it produces.

Letting the seams of the theatre show was once labelled Brechtian, and was often used for political purposes, to point to ideology and to underline how power works.  In Moonfish’s hands, seeing the means of production at work also has a political valence; the production leaves you with the horror of British political and social neglect that allowed so many to die during the famine.  But although we learn from the story, Star of the Sea and its collective of artists also gesture toward the politics of performance as well as the politics of representation.  The six consummate performers—Ionia and Máiréad  Ní Chróinín, the sisters who created Moonfish, along with Morgan Cooke, Grace Kiely, Zita Monahan, and Simon Boyle—tell the story together, and the program notes say that “the ensemble directs each other.  This gives every member of the company faith in and ownership of the production.”

That mutual commitment shows in every line the performers say, in every gesture they make, and in every image Star of the Sea offers its audience.  The production adapts the novel with glorious theatricality, honoring a story told in one form with the specific craft of another, and with all the heart and soul of artists who care about a nation’s history and its future.