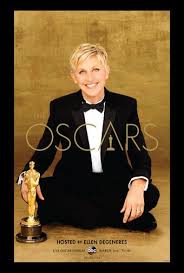 I’ve been thinking all day about Ellen DeGeneres’s hosting of last night’s Academy Awards show broadcast, which seems to have drawn mixed reviews.  I was personally delighted by her low-key opening monologue, by her folksy, day-time-TV presence, by her subtle queer jokes, and by her numerous outfit changes.  Thank goodness she moved from that horrible, femme-y bow-y thing that she wore with her first tux to a more gender-mixed-appropriate, open neck tuxedo shirted white tux with a chic white scarf, before she changed into that silly fairy godmother outfit and then into her final, sparkly black affair. 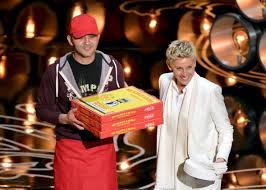 Many on my Twitter and Facebook feeds last night seemed bored by DeGeneres’s antics, especially the extended pizza delivery and payment routines that took up much of her time in the last third of the already very long show.  But I’d much rather see DeGeneres try to build however fabricated community among the glitterati than to hear last year’s host Seth MacFarlane made tasteless jokes about women’s boobs.

Sure, taking and live-tweeting that selfie was silly.  But when it turned up instantly on Twitter, it turned out to be a really good picture.  It showed stars from Meryl Streep to Julia Roberts and Kevin Spacy, as well as Lupita Nyong’o’s brother, game enough to put their happy faces into the frame as Bradley Cooper held the camera.  And sure, the Samsung product placement was nauseating, but the Oscars are about nothing if not overt corporate sponsorship.  Let’s not ring our hands too much over the obvious.

So on the whole, yes, host DeGeneres felt almost too lightweight, casual, and inoffensive.  Except, of course, for that weird note at the beginning, when she called people racist if they didn’t vote for 12 Years a Slave.  And except for her teasing an obviously confused and distressed Liza Minnelli about being a female impersonation of herself.  And except for the juvenilia of creeping up into the seats behind the stars to surprise them on camera.

But I appreciated that she cast her lot in the house with the stars, instead of lording a presumptuous gender and racial superiority over them and us from the podium, as MacFarlane did last year.  In her daytime show, DeGeneres is famous for coaxing some personal authenticity from those who’ve otherwise sold themselves to the Hollywood machine.  That she tried to remake the Oscar telecast into the image of her own television show finally seemed kind of bold.

As for the evening’s awards, kudos to Lupita Nyong’o for her win and her graceful, inspiring, generous acceptance speech.  And to Cate Blanchett for taking her moment at the microphone to chide those (many) people who think films about women aren’t important and don’t make money.  Her feminist intervention was necessary and refreshing in an evening when too many people steered clear of the politics of their own work.  Jared Leto, winning for his role as a transgender woman in Dallas Buyers Club, finally tried to say something intelligent, after an awards season’s worth of uninformed remarks that called attention to himself instead of the history his character represents.

And Matthew McConaughey?  His bloviating, self-aggrandizing paean to his god and himself was remarkably tone-deaf, given what the film was about.  To not mention HIV/AIDS or the real person on which the film was based?  To talk only about being a hero to himself?  Disgraceful.

Of course, as so many have pointed out since Dallas Buyers Club premiered, it’s easy to write stories that generate empathy for straight white people with HIV/AIDS, and to award straight white men playing people grappling with the disease.  Have we really not come very far from Tom Hanks in Philadelphia, oh those many years ago (21, to be exact)?  And do Leto and McConaughey truly think that they can play these characters without remarking on their role in history or on the fact that the disease whose early days the film represents is still a deadly and stigmatizing social scourge for so many around the world?  Do they really think that their work is just about them?

Of course they do.  That’s what our culture tells actors.  We admire their personal transformations—McConaughey’s touted weight loss and Leto’s physical performance as a trans woman—because all we’re encouraged to see is the superficial aspects of an actor’s work.  The Academy likes to award actors who appear to take huge physical risks, especially with weight gain and loss—Charlize Theron in Monster and Christian Bales in The Machinist, among so many more—in part because it’s a visual marker of transformations that we don’t otherwise know how to talk about. The average theatre- or movie-goer has no idea what it means to act.  We all think we understand celebrity, but that has nothing to do with the craft of acting.  People don’t know the language of beats or super-objectives, physical choices or blocking, concentration or emotional recall, the creation of a character through the careful building of an imagined history that informs every facial expression, physical gesture, and mannerism.

People know nothing about creating the illusion of character “psychologically” or “from the outside in”; those of us who do know these terms have done very little to popularize them. Acting remains mystified, by critics and theatre- and filmmakers alike.  As I remarked at a colloquium on criticism organized by Karen Fricker at Brock University in St. Catharine’s, Ontario, two weeks ago, how often do we attend talkbacks only to hear spectators ask actors how they learned so many lines?  People don’t know what else to ask because we’ve abdicated the responsibility to teach spectators how the crafts of theatre work—whether acting, or directing, design, or playwriting, for that matter.

As a result, blowhards like McConaughey and Leto can get away with their self-involved, pious statements, because we let them subscribe to the commonsense notion that actors are inspired by gods.  I’m not disparaging the religious faith of many artists, which I know is sincere and motivating.  But some artists ascribe their work to gods or a mysterious muse, instead of describing in detail the hard work and informed choices that go into creating characters or devising stage or film images, choices that resonate in a social context in which they mean something.

How important, then, to hear Blanchett emphasize the importance of producing stories about women, and to hear director Steve McQueen, accepting the Best Picture award for 12 Years a Slave, talk about the persistence of slavery, as an historical memory and in its contemporary manifestations.  How important to hear John Ridley, who adapted the narrative on which the film was based, honor the free man who was enslaved for too many years as the lifeblood of the story.

And how terrific to see Darlene Love, one of the featured performers in the award-winning documentary 20 Feet From Stardom, take the stage at that theatre and just open her mouth and arms to sing gloriously and joyfully, as if to say to spectators, “This is what my work is all about” or “This is how we did it in this film.”  She showed her delight by showing her talent and her work.

The Oscars, after all, shouldn’t be all about the dress, or the tux, for that matter, as the simpering, fawning red carpet “commentators” would like us to believe.  Awards for the “best” of the year should be about the stories and the craft, and the show (and all the criticism and feature articles that precede it) should be about honoring the particulars of the artists’ work.  Wouldn’t it be something if all spectators knew how to talk about an actor’s work on stage or in a film, just as most Super Bowl viewers can talk about an athlete’s work on the field?