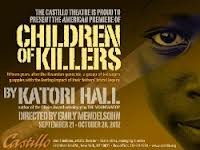 Katori Hall’s 2011 play takes on the difficult task of theatricalizing the haunting national trauma of the 1994 genocide in Rwanda by considering the children of Hutu militia born after their fathers perpetuated mass murders, rapes, and maimings against their fellow Tutsi nationals.   The young men around whom the play revolves, Innocent, Bosco, and Vincent, are teenagers just coming into their manhood when they learn that the first wave of Hutu soldiers has been released from prison to return to their villages.

The boys anticipate the appearance of men they’ve never met, about whom they’ve created their own mythologies from a mixture of fear and impossible admiration; Innocent boasts that his father killed more than 600 people and Bosco’s father more than 700. Vincent’s father assumes an elevated place as allegedly the most adept of the patriarchal killers.  In a chilling scene, Innocent and Bosco imagine in graphic detail how their fathers slaughtered their victims, cutting off their limbs with sharp machetes, using their detached heads as soccer balls, and forcing women to eat the body parts of their children.  They also taunt one another with details of the rapes, proposing that the sexual violence was perpetrated by those with “the sickness” to insure that HIV/AIDS would kill their victims slowly and painfully.

Esperance, a young, maimed Tutsi woman who survived by hiding under a pile of bleeding dead bodies after one of her arms was severed, crosses the boys’ territory as a living reminder of their fathers’ violence.  Innocent and Bosco threaten to harm Esperance (LaTonia Antoinette) when the statuesque young woman wanders into their space bearing a large plastic water jug on her head, the scars of war painted in white against her dark skin.  The boys encircle and taunt her, calling her “cockroach,” the despicable nickname that helped justify the Hutu’s massacre of their country’s ethnic minority.

When Vincent steps in to protect Esperance, Innocent and Bosco protest that they were only joking.  But it’s clear that these children can’t come to terms with the history of violence into which they’ve been born, and their anxiety over their fathers’ return simply heightens their tense relationships.  If the three boys are haunted by the legacy of their fathers’ violence, Esperance carries the bodily memory of her own victimization.  She remembers trying to breathe beneath the heavy load of her butchered fellow Tutsis, and surviving only to watch her mother die of AIDS.  Esperance now protects Emmanuel (Khadim Diop), her young, rather hapless brother, who insists that his conception was “immaculate,” like Jesus’s, when the other kids know that he’s a child of rape.

Although the play proceeds in a realist style, Hall represents the memory of national trauma in ghostly children who haunt several of the central characters in turn.  Played by ten young actors, who serve as a movement and vocal ensemble on- and off-stage, they collectively embody guhahamuka, a Rwandan word that apparently came into wide use after the Tutsi genocide that means “the breathless attempt to articulate the inexpressible.”  Hall and director Emily Mendelsohn represent guhahamuka as a persistent, terrifying, resonating memory of historical violence with visions that each character suffers alone.  The others can’t see or hear the taunting specters that infiltrate the scene, sometimes projected as over-sized shadows against the scrim that surrounds the stage, sometimes present as an undulating mass of bodies dressed in soft blues and beige, sometimes simply heard as voices chanting or laughing with manic, threatening energy.  None of the characters can shake these ghosts, who accompany them everywhere as reminders of their own national complicity.

But even as the boys are haunted by genocide and await their fathers’ return, they dream of other lives and desires.  Bosco (Melech Meir) wears a Lakers basketball shirt, and boasts that his good looks will win him a place as “Rwanda’s Top Model.”  Innocent (Sidiki Fofana) brags of his nascent sexual prowess, developed without the advice of a male role model.  Vincent (Terrell Wheeler), despite his father’s renown as a butcher, is the most conflicted boy, ambivalent about his father’s return and inexplicably drawn to the Esperance, who rebuffs his efforts at warmth as no more than ethnic guilt.  Vincent’s turn to violence at the play’s end seems out of character, a surprising action for a young man who appears to be noble and strangely hopeful throughout.  Hall’s story probes the effects of a nation’s trauma on its youth, but Vincent seemed poised to break the historical cycle, until it catches up with him, too.

In fact, the play’s last scene underlines historical repetitions.  Vincent’s father does return to the village, and is welcomed back into his home by Vincent’s mother, who’s adorned her lips with bright red lipstick to make herself appealing to her long-missing husband.  In his absence, Mama (Suzanne Darrell) has had to barter sexual favors for food and basic survival; she’s had a daughter with another man.  Her husband sits at her table, eating food she’s prepared while she watches, still, silent, and fearful.  When he reappears, Vincent Sr. (Raphael Agbune) acknowledges young Vincent as his son; he says he recognizes himself in the boy’s eyes, metaphorically seeing the violence Vincent has just inflicted.  But Vincent Sr. banishes Mama’s daughter, Felicite (Naja Jack), from his table, knowing that she’s not his blood.  As the lights dim, the patriarch resumes his place, eating across the table from his son while Mama contemplates a continually troubled and uncertain domestic–and by extension national–future.

Children of Killers, at 65 minutes, necessarily schematizes a complex and devastating national history.  Theatricalizing genocide is challenging—witness the canon of Holocaust plays over the years that have pondered how to represent the meanings of mass murder.  Embodying genocide in a realist play is bound to reduce its horror.  For instance, Vincent comes to Esperance’s rescue in a gesture of both chivalry and budding sexual attraction.  Under the terms of realism, the play requires the typical romantic trope to motivate and help explain his climactic violence.  Such realist justifications remove the characters from the very history Hall wants to represent and explore.

On the other hand, the Castillo Theatre’s production is well wrought and compelling.  The young actors in the leading roles and in the ensemble representing guhahamuka are appealing and convincing, imbuing their characters with verve and determination despite their ambivalence about their historical inheritance and their concern for their immediate and long-range futures.  Many of the performers in Children of Killers train at the Castillo’s theatre school and participate in the theatre’s All Stars Project which “seeks to provide opportunities for young people and adults to express themselves through performance in ‘mixed company’: that is, before our highly diverse audiences. . . . In selecting our plays and performances, we are guided by basic democratic principles of inclusion, artistic freedom, and freedom of speech.”

The Castillo’s demonstrated commitment to social justice in the plays it selects and in its production values was a felt experience in the audience the night I saw Children of Killers.  In its flexible theatre, director Mendelsohn and set designer Joseph Spirito placed the two domestic settings—a kitchen and a bed—at either end of the long, wide playing space.  The central outdoor action took place between two groups of spectators arranged in rows on risers facing one another.   Rather than peering into the fixed and inexorable frame of a proscenium, we swung our heads from one end of the playing space to the other, and in the process, looked across at the other half of the audience.  The space required us to contemplate our own closeness to and complicity with the action taking place in and represented by the play.

Children of Killers was commissioned by the National Theatre in London and performed as part of its Connections Festival, a year-long celebration of writing for young people (see Hall’s web site).  The Castillo Theatre’s very earnest American production raises crucial issues for consideration.  What do children do with a legacy of violence?  How can a nation address a recent past of ethnic brutality in which so many people were slaughtered so viciously?  How does a people and a country move into the future on the basis of such a bloody past?  It’s impossible not to applaud Hall’s attempt to use theatre to address these questions.