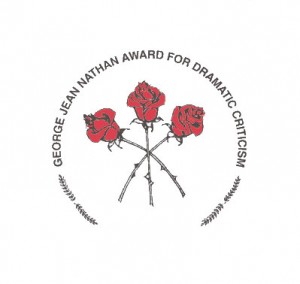 The ceremony at which I received the George Jean Nathan Award for Dramatic Criticism for 2010-2011 was staged in Prospect House at Princeton University on April 28, 2012.  Cornell professors Roger Gilbert and Ellen Gainor (who kindly nominated me for this honor) presented me with the actual award, after which I delivered the following remarks.  My words were followed by a panel discussion about theatre criticism, gender, and blogging, the audio transcript of which I hope to post shortly.  Once it’s transcribed, I’ll add it to The Feminist Spectator site.

My Nathan Award remarks follow; they begin with a list of thanks that I include here, for the record.—JD

Thank you so much for this honor and for your nice words, Roger and Ellen.  I so appreciate your willingness to come to Princeton to give me this honor.  I want to thank a few other people before we start the rest of the program.

First, I’m pleased not to be the only Nathan award winner present today.  Three of the panelists are previous Nathan award winners, and I want to introduce Sally McMillin, wife of the late Scott McMillin, who was the 2006-2007 Nathan winner.  I’m very glad Sally could be with us today and I thank her for coming.

I also want to thank Joe Fonseca, the crackerjack Theatre Program Assistant, whose work on all of our events is always crucial to their success, and no less so this one.  Joe makes everything possible, and does it with such good cheer and generosity, he’s a model for us all.

I want to acknowledge the extended Dolan Family and the Wolf family, who’ve trekked up here from DC, Baltimore, and Pittsburgh for this event.  Bear with me while I introduce them by name, so that you can see them all:  My sister Randee and brother-in-law David, and niece Morgann; my sister Ann and brother-in-law Bert, and nephew Ben; my aunt and uncle Mel and Marcia, and my cousin Jeffrey; my aunt and uncle Harriet and Ron, and my cousin Rebecca; my mother-in-law (though we use the word “in-law” loosely in our household), Saralee Wolf; my sister-in-law Allison and my niece Liliana; my brother- and sister-in-law Josh and Vanina and my niece and nephews Noe, Jacob, and Daniel.

Last but not least, I want to introduce and thank my father, Jerry Dolan.  Aside from Stacy, Dad has become my most avid reader and my biggest fan.  It’s a real pleasure to discuss what I write with him and I’m so grateful for his interest, his support, and his presence.  It means so much to me that Dad and my families are all here.  These are the people who make me who I am.

Finally, I want to thank my partner, Stacy Wolf, who we call Feminist Spectator 2 in our house, because she sees everything I write about with me and always reads and comments on drafts of my blog posts (and everything else I’ve written for the last 23 years).  As usual, everything is better and sweeter because she shares it.

The plan from here is that I’ll say a few preparatory words before we turn to our free-wheeling discussion about gender, theatre, and blogging.  We’ll leave time for questions and comments from all of you.  We’ll end with my archivist and webmaster, Helaine Gawlica, who will spend a few minutes showing us the newly redesigned Feminist Spectator blog.

I started The Feminist Spectator in 2005, mostly because I found myself itching to get back to a kind of “reviewing” that I’d done much earlier in my career when, as an undergraduate and then graduate student, I wrote for school and neighborhood and feminist papers in Boston and New York.  I was living in Austin, Texas, in 2005, and thought about contacting the arts editors of the daily and weekly papers there to offer my services.  But I realized at the same time that I actually didn’t want to be beholden to a word count or to an editor’s assignments; I was looking for more agency than that.

It happens that this was when the Five Lesbian Brothers were working on their play Oedipus at Palm Springs at New York Theatre Workshop (and I’m very pleased that two of the Brothers—Moe Angelos and Lisa Kron—are here today).  They’d blogged about their process; in fact, theirs was the very first blog I ever read.  The “Blogspot” site was at that point very easy to use, even for a neophyte like me.  So I chose a template, created my blog, and started writing.  I named the site after my first book, The Feminist Spectator as Critic, which seemed to nicely link my career as a scholar with my commitments as a public writer.  The first blog I wrote, as it turns out, was about Oedipus at Palm Springs.  Writing quite a long meditation on the Brothers’ work and their new play was incredibly pleasurable.  I found other things to write about that summer and fall, and before I knew it, people were following the blog.  Honestly, it all felt like magic.

After my initial posts, I laid a few ground rules for myself.  I tried to write at first every other week and then, especially after we moved to Princeton in 2008, every week.  I decided to use the space to write mostly about theatre I liked; that is, it didn’t seem worth it to use my time to write negatively about what I saw.  I wanted to concentrate on work by and about women, although that quickly expanded to any kind of work, viewed from a feminist perspective.  I also started writing about film and television.  Here, too, I preferred to write about work that I found hopeful from the perspective of gender, sexuality, and race, but I allowed myself to write more critically of mainstream popular culture, especially work that was favored by critics who didn’t take into account its gendered meanings.

Also, I don’t hold with the anti-popular culture sentiment of some feminists and commentators.  As a critic, I think it’s especially important to intervene in what might be called “mass entertainment” from a feminist perspective.  Often, when I’m writing about especially mainstream films or television shows, my goal is to refocus the lens, to see from the side, as it were, where all the holes in the narrative are suddenly clear, and where all its presumptions and exclusions are most transparent.

So I began a two-prong approach to my blogging, advocating work by women and people of color and engaging more pointedly with popular culture.  And I wrote, and I wrote, and The Feminist Spectator became herself a kind of alter-ego.  I can’t tell you how much pleasure maintaining this blog affords, and I can’t begin to say how much it means to me to be honored with the Nathan Award for this work.  It’s a labor of love, but it’s also a commitment to the belief that writing about the arts matters as much as art itself.  Creating a rich and fertile discourse helps broadcast the arts into American culture, and helps us all think in more engaged, analytical ways about what we see and consume.  I’m a firm believer in pleasure; but I think that critical thinking, too, can be pleasurable, that thought and fun don’t have to be mutually exclusive.

Journalist Katie Roiphe wrote an essay about criticism for the Times Book Review two years ago that strikes me as pertinent today.  Of course, I disagree politically with most of what Roiphe writes, but in that essay, she said that a book critic’s job is to write beautifully about the literature she reads.  I agree, and think that theatre and pop culture critics should do the same.  When I tell people that I write a blog, many of them assume that it’s a compilation of short, tossed-off thoughts, a personal chronicle of my impressions. In fact, the posts I most enjoy writing are the ones for which I’ve had time to wrestle not just with my ideas about what I’ve seen, but to craft my sentences, and to write and rewrite and rewrite again, until I know that my words do justice not just to my experience but to the performance itself.

I especially feel this responsibility when I’m writing about work that’s not mass entertainment or that might not be widely seen.  I want my words to recreate what it felt like to be in the room with Peggy Shaw and Lois Weaver as they performed Lost Lounge, or while Holly Hughes contemplated dog agility trials and the waning of lesbian feminism in The Dog and Pony Show.  To truly communicate the live experience of those performances, I need to use my words, which are the only tool I have to try to recreate the impact and import of what I saw and felt as I watched.  My words become an argument for seeing, a way to urge people to look more broadly, and to engage culture that might surprise and change them.

I feel so humble in the face of theatre, especially in front of performances that “work” and that touch me and the “us” with whom I watch.  It’s that humility and emotion I want to capture in my writing, my belief that theatre does something, that it makes a difference in the world even by changing one mind or touching one heart.  I can think of performances that rocked my world with an intensity that felt revolutionary.  I know that theatre doesn’t necessarily prompt revolution, though sometimes it has and perhaps it will again.  But I know that performances I’ve seen have rearranged the molecules of my soul enough for the world to look different when I leave the theatre.  It’s that newly refracted shaft of light I want to shine with my sentences, the wonder of that feeling I want to somehow translate onto a page or a screen, what Jewish theologian Abraham Joshua Heschel called the “radical amazement” of seeing the quotidian world as transformative and transformed.  If The Feminist Spectator does that even occasionally, then I’ve deserved this award.  That’s the challenge and the deep pleasure of the writing, for me—trying to communicate what I felt and what I thought, the power of being there, of being changed, of being part of a live moment that mattered.

Thank you so much for this award.