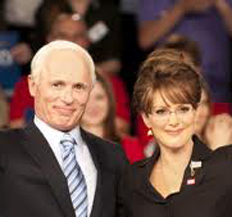 The HBO-produced adaptation of Mark Halperin and John Heilemann’s best-selling 2009 book, Game Change centers on the John McCain-Sarah Palin part of the ticket for the 2008 Presidential election.  While the book looked at Clinton and Obama’s dust-up over the Democratic nomination as well as McCain’s eventual fight for the vote against Obama, the film adaptation focuses on the selection and requisite care and feeding of the star personality who became Sarah Palin.

Impersonated with empathetic, uncanny likeness by Julianne Moore, Palin appears in Danny Strong’s script just as she did in Halperin and Heilemann’s book—as an ignorant, child-like woman thrust into the national limelight way too fast, way too soon, and way too recklessly by a campaign trying to “do something bold” to shift attention from Obama’s meteoric rise in popular favor.

With a breezy, rather snarky tone, the book doesn’t waste time lambasting McCain staffers for their lightly vetted choice of the then barely known governor from Alaska.  Based on the numbers game that now determines elections, the McCain campaign realizes that they’ll lose if they can’t close the gender gap that’s opened in the polls.

Although McCain is intent on selecting Joe Lieberman as his “bold choice” for a running mate, to demonstrate that bipartisanship is possible on a presidential ticket, Lieberman’s pro-choice reputation makes him a bad pick for holding onto the far Right voters who are now necessary to secure the Republican base.  (Game Change takes place in 2008.  The present contest for the Republican nomination demonstrates how much farther the extreme Right has thrust itself into the party.)

When Rick Davis (Peter MacNicol), McCain’s national campaign manager, stumbles across a YouTube video of Palin chatting with an interviewer, he’s captivated by her charisma, poise, and attractiveness.  The brief scene underlines that Palin’s competition wasn’t stiff; the other women Davis watches are obviously competent politicians but dreary, uninspiring (and, not insignificantly, unattractive) performers.  Game Changeemphasizes that Palin is an adept political actor, following the footsteps of her hero, Ronald Reagan (who was nothing if not a consummate, Hollywood-trained matinee idol).

Davis and other McCain staffers quickly realize that Palin has much of Reagan’s magnetism, and soon, she’s on the ticket, appealing to Republican voters with her “aw shucks” performance of ordinariness.  What soon appalls the McCain campaign is how little real knowledge of the political system supports her sudden appearance in the national arena.

Where the book was a biting indictment of Palin and what it painted as her self-involved, self-aggrandizing machinations, the film adaptation, directed by Jay Roach (Recount), is in most ways kinder to the former governor.  Strong’s script underlines that she never asked for the spotlight, and was invited to take the number two spot on McCain’s ticket without being carefully vetted.

In a scene illustrating her only pre-announcement interview with Steve Schmidt (Woody Harrelson) and Mark Salter (Jamey Sheridan), McCain’s most powerful staffers, they ask questions to determine her willingness to play by McCain’s rules and espouse his views (a promise on which she ultimately reneges).  But they never dream that she can’t cite a single Supreme Court case or that she might not know what “the Fed” represents.

The film portrays the McCain campaign’s incredulity when Palin’s real deficits begin to emerge.  Attempting to prep her for debates and interviews on national television, Palin is truculent and withholding, reducing frustrated staffers to providing boilerplate answers to the questions they anticipate will be posed.

But the film suggests it’s not really Palin’s fault that she’s in way over her head.  She excelled as the governor of a small state in which she met voters at the fair with her family (represented in an early scene), and chatted with constituents one-on-one as she took her daughters on the rides.

Moore perfectly captures Palin’s folksy, somehow sincere warmth in those early pre-vp selection scenes, and demonstrates, in her first meeting with Schmidt, that Palin has more steely reserve than first appears.  Her debate prep scenes are both horrifying and pathetic, as Palin sits with a pencil and a notebook furiously scribbling down information that staffers lecture at her.  She seems a reluctant student, but one eager to prove that she can pass the course.

But she passes her way, and becomes the wrong sort of maverick in the McCain campaign.  As she gains confidence from the warm crowds she attracts at personal appearances, power begins to change Palin into a more Machiavellian operative who’s more concerned with her own image than the campaign.  But because Game Changedoesn’t hold her entirely responsible for being on the ticket in the first place, even her shift into a more calculated power-grabber doesn’t read as an utter indictment.

In one of the film’s most poignant scenes, Moore-as-Palin watches Tina Fey-as-Palin re-perform on Saturday Night Live the real Sarah Palin’s devastating Katie Couric interview.  Moore’s face (as Palin) is a study as she gradually registers that Fey is making fun of her.  Alone in front of the television, Moore carefully builds Palin’s hurt resentment, as she realizes she’s being ridiculed.  The scene humanizes Palin by imagining her feelings as she watches Fey, and helps viewers understand why she soon becomes obsessed with her image and approval ratings.

Game Change also presents Palin’s family respectfully.  Todd Palin’s political peccadillos are washed with a patina of innocence, and even Bristol’s pregnancy seems like just another adolescent indiscretion.  Of course, the story picks up before their lives have been invaded by a rabid national media, but the film depicts the family as sincere and rather naïve, as wounded as Sarah by what they see as the campaign’s and the press’s betrayal.

By giving Palin’s personal life a pass, and through Moore’s remarkably sympathetic performance, Game Change’s discerning critique falls more softly on the mercurial personality quirks of a woman untested in the baiting and switching of hardball national life than it does on an expedient political system driven by television cameras and polling numbers.  The film emphasizes that Schmidt, McCain’s senior strategist, was full of hubris to think that Palin would solve the campaign’s problems, and the movie’s narrative turns mostly on his trajectory.

Played by Harrelson with a swagger that dissolves into humiliation, Game Changetraces Schmidt’s horrified understanding of his mistake and the consequences it could have had for the nation had McCain been elected.  The film is bookended by scenes of Anderson Cooper interviewing Harrelson-as-Schmidt about his reflections on the 2008 election after the fact.

Schmidt deflects Cooper’s direct probing about whether Palin was truly ready to assume the presidency.  He does, however, squirm when Cooper reminds him that she was the vice presidential nominee for a candidate who was 72-years-old during the campaign and had already suffered two bouts of melanoma.  These framing interviews are juxtaposed deftly with Game Change’s scenes of Palin stumbling over basic knowledge of the American political system, which allows the film’s critique to laser in on handlers like Schmidt, for whom performance and the superficiality of capturing the camera’s attention was, for a time, more important than anything else.

Game Change chronicles Palin’s change alongside Schmidt’s.  If they start as uneasy allies, by the film’s (and the campaign’s) end, they’re adversaries.  Palin insists on giving her own concession speech the night of the election; Schmidt practically spits at her when he tells her that vice presidential candidates never give such speeches.  For Palin, unburdened by knowledge of precedent, the rules are up for grabs.

Her willingness to put her finger in the eye of Washington went on to endear Palin to Tea Party-ers looking for a heroine.  Her empty charisma and her superficial ease connecting with voters through a medium that looks intimate while it maintains a boundless distance did indeed change the game.

Frank Bruni, writing in the New York Times, published several blogs on the film that address the question of McCain’s campaign staffers’ loyalty.  Bruni argues that if the dirty laundry of necessarily brutal campaign practices is hung out publically to dry, as it is in this film, honorable potential candidates will shy from the most bruising, most prominent races.

But the confidentiality of the political process seems an already dead issue.  What Game Changeunderlines for me was how mercenary McCain’s male staffers were in playing to the gender gap, choosing a female vice presidential running mate not on the basis of her qualifications, but on her appearance and a charisma they thought would buy votes.

Their thoughtlessness and implicit misogyny (choose a woman, any—pretty—woman) brought the body politic the persistent problem of Sarah Palin, a woman who went on to co-opt feminism for her own selfish purposes, who continues to champion her political ignorance, and who remains the star of a fictional “Main Street” on which “ordinary” American people are white, straight, racist, homophobic, anti-choice, and proud of their political stupidity.

Game Changeends with Schmidt, Davis, and Salter drinking in a bar on election night after McCain has conceded.  They ruefully agree that McCain’s loss let them dodge the bullet that Palin as vice president would have shot into the American political system.  But the film (and the book) also lets them off the hook.  They down their drinks, shake their heads sheepishly, and go off to run other campaigns, bearing no on-going responsibility for ushering Palin so far into political power.