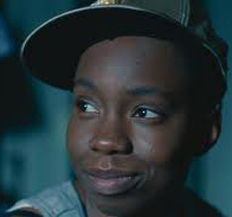 Dee Rees’s debut feature film is a terrific study of a teenaged girl who identifies as a lesbian, even though she lives under the heterosexual enforcement of an unhappy mother and a warm but philandering father.

Rees’s semi-autobiographical film does a beautiful job of narrating the double-life of Alike (Adepero Oduye), a very smart high school senior who dresses as a conventional girl under her mother’s disciplining eye, but then changes in the bathroom as soon as she arrives at school into the t-shirt and sideways-worn ball cap of the butch lesbian she knows herself to be.

Pariah is a family study and a coming of age film that illustrates the shifting mores of a particular slice of mostly middle-class African American life. Alike’s sister and her high school peers, for instance, are indifferent to or intrigued by her gender performance, but those of her parents’ generation eye her with antipathy and suspicion.

Her mother, Audrey (beautifully played by Kim Wayans), frantically tries to enforce Alike’s waning heterosexuality, buying her a deep magenta sweater with ruffles down the front that couldn’t be further from her daughter’s self-presentation.

Much to its credit, Pariah is a coming of age story, rather than a coming out story. When Rees first introduces us to Alike, she’s already very clear about her identity, though she’s yet to have sex. Much of the film details her flirtations with other women, including her devastation at the hands of coldhearted Bina (Aasha Davis), a straight young woman who befriends and seduces her, only to dismiss Alike the morning after.

But Alike’s certainty about who she is—and that “God doesn’t make mistakes,” as Audrey claims and Alike agrees, but from diametrically opposed perspectives—drives her toward her own liberation.

Still, Rees details with compassion the enormous costs that remain for these young women. Laura, Alike’s butch mentor through the world of clubs and dating, has been kicked out of her family home and has left school. She lives with her understanding older sister, Candace (Shamika Cotton), both of them struggling to make financial ends meet while Laura studies for her GED.

When a dyke club opens across from a bodega that Arthur (Charles Parnell), Alike’s father, frequents, the male customers eye the women who stop by the store with hostility. One calls out a young woman, who listens to his disparaging remarks and then casually insults him right back, much to the amusement of Alike’s father and his friends.

Although the scene is tense, and pregnant with the possibility for gendered violence, the young dyke saunters out of the store with the upper hand. The tide of public opinion, Rees suggests, is turning.

Alike’s sister, Sharonda (Sahra Mellesse), teases her older sibling mercilessly. But when she crawls into Alike’s bed one night for comforting, as they both listen to their parents’ incessant nighttime quarreling, Sharonda whispers, “You know I don’t care, right?” She isn’t specific, but they both know that Sharonda is talking about Alike’s sexuality.

When she finally passes the test, Laura returns to her family’s home, where her disapproving mother opens the front door warily—and only halfway—listening with stony hostility to her daughter recite her recent achievements and saying not a word in response.  When her mother closes the door in Laura’s face, you can feel Laura’s heartrending loss and humiliation at her mother’s rejection.

Pariah upends expectations by refusing to succumb to genre stereotypes.  For instance, although the bar Laura and Alike frequent is in what Arthur (who’s a detective for the NYPD) calls a “bad neighborhood,” the bar is represented as a place of heightened sexuality, experimentation, and lustful openness, but never as a site of violence or invasion.  The women in the bar create their own space; since the film is set in the present, no police harassment spoils their fun.

Likewise, when Laura and her friends hang out on the piers smoking dope and drinking, Rees construes the public space as open and free, rather than one in which her characters might be victimized.  Laura observes another young woman talking to a john in a car about a potential trick; in a different movie, Laura would start turning tricks herself to help pay her expenses.

But in Pariah, the characters’ grit and dignity insist on hope.  Alike and Laura are smart and capable.  Only their parents’ blindness to a sexual and gendered future in which their choices are acceptable hampers their way.

Because the film is semi-autobiographical, art and creative expression finally free Alike.  Her supportive high school creative writing teacher encourages her to “dig deeper” with her poetry.  After Bina breaks her heart, Alike knows something of love and loss.  Davis plays Bina with a nice balance of cruelty, warmth, and her own sexual confusions.  Her scenes with Oduye, as the two girls are forced together by their mothers and then gradually form their own bond, ring true and complicated.

In the film’s climax, Audrey physically attacks Alike when she admits she’s a lesbian, cutting her cheek with her ring and knocking her daughter to the floor.  But Bina’s cruelty and her mother’s violence only shore Alike’s resolve, and she finds her creative voice.  Her poems express both her emotional pain and her fierce determination and her talent launches her out of her family and into the future.

Pariah‘s advertising tag line offers the dictionary definition of the word:  1.  A person without status.  2.  A rejected member of society.  3.  An outcast.  Rees’s film narrates how Alike turns those understandings around one by one.

The actors are uniformly terrific in a cast that should have been honored with one of the many ensemble award acknowledgements going to films like The Help.  Oduye is wonderful as Alike, conveying both her youthful inexperience and her self-knowledge and desire in ways that honor the complex character Rees creates.

Walker, as Laura, brings dignity and depth to a role that could have easily fallen into the sidekick stereotype.  She and Oduye create a friendship layered with loyalty, tinged with lust, and shot through with its own complicated desires, always balancing the power shifts that rock their relationship unpredictably.  Alike, after all, still has parents and a home; Laura has been exiled from a family she clearly still loves.

Pariah’s only less convincing characters are Alike’s parents, who too often seem like vehicles for her story rather than full-fledged people of their own.  Arthur, her father, is successful professionally but unhappy personally.  He’s clearly having an affair and barely tolerates his hovering wife.  Audrey is simply unhappy, and takes out her resentments by berating her husband and too tightly controlling her daughters.  As a mother, she’s a shrewish monster, whose desperate insistence on Alike’s heterosexuality displaces her own failed intimacies.

Naturally, Alike identifies with Arthur, who recognizes his oldest daughter’s sexuality but can only support her tacitly.  He’s too weak-willed to stand up to Audrey, fleeing instead to solace outside his family and letting his daughters bear the brunt of her wrath.  After Audrey attacks Alike, Arthur begs her to come home, but Alike stays with Laura, firmly refusing, until she graduates high school early and rides off to San Francisco to accept a scholarship at UC-Berkeley.

Her relationship with her parents makes Alike’s story conform a bit too closely to the stereotype of the father-identifying lesbian alienated from a malignant mother.  But Wayans and Parnell bring nuance to these conventional roles, representing as they do a way of thinking about sexuality and gender that, Pariah argues, is becoming quickly anachronistic.

When Meryl Streep won the Golden Globe award as best actress for her performance in The Iron Lady, the gracious actor took the stage and acknowledged not only her fellow nominees, but also Adepero Oduye, who wasn’t nominated for a Globe or for an Oscar.

Streep’s gesture was generous and true.  Pariah might still be in limited release, and might never achieve the box office of a bigger film, but as an artistic statement, it’s vivid and important.  The film was nominated for the 2011 Grand Jury Prize at Sundance (where Bradford Young won forPariah‘s cinematography) and for various other awards, but escaped notice by the most visible, prestigious committees.

What a shame.  Pariah’s is a story that needs to be seen, heard, and told and told again. Rees’s version is moving, beautiful, and deserving.