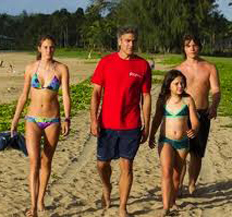 Writer-director Alexander Payne’s films—if About Schmidt, Sideways, and now The Descendantsare any indication—are sensitive, expressive investigations into white, middle-class, heterosexual masculinity.  George Clooney, recently nominated for an Academy Award for his role, for which he already won a Golden Globe, plays Matt King, a real estate lawyer in Hawai’i whose life falls apart when his wife’s injury in a boating accident leaves her in an irreversible coma.  In the voiceover that frames much of the film, Matt admits that he’s always been the back-up parent to his two daughters, and can’t quite fathom what to do with his family when he’s left in charge.

As his wife lies in a hospital bed kept alive by a ventilator and IV fluids, Matt is called to his 10-year-old daughter Scottie’s elementary school to apologize for the photographs the girl took of her indisposed mother, which she pasted into an album to share at show and tell.  Then he has to bring Scottie (Amara Miller) to a classmate’s house to apologize for more of her indiscretions.  The kid is foul-mouthed and unpredictable; as Matt talks on the phone, he sees her throwing deck chairs into the family pool.  So he wrangles Scotty onto a plane and goes off to the Big Island to collect her 17-year-old sister, Alexandra (Shailene Woodley), hoping she can help out.

Instead, Matt finds Alex drinking with a friend, out past her curfew on the grounds of the private school at which she boards.  When he and Scottie bring Alex home, she’s hostile and impertinent.  At her last visit home, she fought with her mom, and doesn’t hesitate to inform Matt that his wife, Elizabeth (Patricia Hastie) was having an affair.  Matt knows he’s been an inattentive husband and an absent father, but this news unravels what he thought was his safe, secure world.

Clooney is a subtle actor, with an admirable willingness to push beyond his handsome, action-star reputation.  (He’s also very good as a corrupt presidential candidate in The Ides of March.)  Matt’s face and bearing change in small but significant ways when Alex tells him about Elizabeth’s infidelity.  He changes from a smooth public operator to a man humiliated by what he didn’t know about the most intimate aspects of his own life.

Once the story focuses on finding Brian Speer, The Descendants becomes a kind of intra-Hawai’i road movie, except that Matt and his family fly among the islands to track Brian down.  [Spoiler alert, though nothing in the film is really a surprise.]  They’re accompanied by Sid (Nick Krause), Alex’s the hapless guy friend, whose presence she insists will help her be more civil to her father and her family.  While at first Sid seems a thoughtless, insensitive child—he laughs at her grandmother’s Alzheimer’s and doesn’t seem very sympathetic to Matt’s plight—it turns out that he recently lost his father and proves more emotionally acute than Payne at first lets on.  The foursome slowly, carefully reconstitutes a semblance of family by replacing their grief over Elizabeth’s impending death with their wrath about Brian Speer.

When they find him on Kaua’i, and it turns out Speer has a wife and two small kids.  Their rage dissipates into irritated sorrow, as Matt understands that the man he’s pictured as a mythic monster is really just an ordinary person who made a mistake.  In their climactic confrontation, Matt insists things happen for a reason, but Speer argues that, to the contrary, sometimes things just happen.  Living within that capriciousness is part of Matt’s life lesson, and forgiveness becomes the film’s rather pat, too comfortable denouement.

Elizabeth dies after they remove the ventilator—in accord with her living will.  Matt and his daughters sprinkle her ashes off a canoe they row out to sea, encircling the dissolving ash with their leis as the huge hotels of the Oahu shore loom in the background.  In the film’s last shot, Matt, Alex, and Scottie lounge silently but companionably on the family couch, watching March of the Penguins together as they eat ice cream.  With the stationary camera set in a medium shot, we watch them make room for one another, sharing a blanket and their dessert as they listen to Sydney Poitier narrate the epic story of penguin families and their journey.  The analogy couldn’t be clearer.

Payne contrives the plot to serve Matt’s character development.  As in Sideways, all that really happens in The Descendants is that a man weathers a mid-life crisis and comes out on the other side, knowing himself a little better and becoming more forgiving of himself and his circumstances.  Matt, mind you, has a very good life—his last name, after all, is “King,” and his family owns a large parcel of land on Oahu, the sale of which the whole state is apparently tracking.

When it turns out that the Brian Speer (whose name is also perhaps too symbolic) stands to profit from the sale, Matt waxes sentimental about being Hawaiian (his great-grandmother was an island native).  Against the wishes of his (mostly male) cousins, Matt decides to keep the land (and a beautiful stretch of gorgeous blue-green ocean and pristine sand and dunes it is, too—the film makes Hawai’i look like paradise).

Clooney’s performance is open and moving.  He abandons his movie star glamor to play a man who wears short-sleeved Hawai’in shirts and pastel pants with high-riding waists.  His hair is streaked with gray and his face is lined and worn.  He’s deceived by a man who’s clearly not his kind or dignified equal.  But Speer’s very inadequacies secure Matt’s essential goodness.  His emotions move from rage to forgiveness.  He kisses his unconscious wife’s cracked lips when he tearfully says good-bye, using the occasion of her loss to accept his own failings and become a better man.

Matt and Alex find their new and better selves over Elizabeth’s inert body, talking to her as she lies immobile and unhearing.  Alex, too, rises to the occasion of her mother’s death, guiding her little sister and supporting her dad.  Woodley is terrific as Alex, playing a girl thrust into adulthood perhaps a bit too quickly without a trace of sentimentality.  She’s smart, thoughtful, and always seems in control, registering Alex’s emotion without wallowing.  She matches Clooney scene for scene.

But as in Payne’s Sideways, women are the agents of the men’s transformation in The Descendants.  Clooney makes Matt King appealing enough that the film is a pleasure to watch, but I preferred him in Up in the Air, which reversed gender stereotypes by making Clooney’s character the naïve romantic with unfounded expectations of the woman with whom he’s having an affair.

Too many contemporary films rely on the old (often dead) woman-as-agent-of-man’s-self-knowledge-and-redemption trope.  Just in the recent crop of 2011 fall and Christmas movies, for only two among many examples, Ryan Gosling’s character in The Ides of March has his epiphany when the beautiful, young, naïve Evan Rachel Wood character commits suicide over her affair with Clooney’s presidential candidate-senator.

And in the critically touted Iranian film The Separation (nominated for a Best Foreign Film Academy Award), the wife who insists on divorcing her husband is blamed for the subsequent family tragedies and indirectly for the miscarriage of the woman whom he hires to replace his wife’s domestic labor.  The considerably less privileged woman is also portrayed as immoral, while her husband—despite his tendency toward violence—is redeemed by his grief over his unborn child’s loss.  The pattern persists.

The Descendants is well-written, beautifully photographed, and wonderfully acted, but the story it tells is tired and familiar.  And the woman, once again, has to take it lying down.