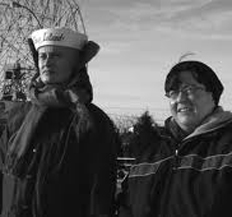 I had the pleasure of seeing Codependent Lesbian Space Alien Seeks Same at the Galway Film Festival in Ireland last summer.  It’s now playing through January 12 at ReRunGastropub Theatre in DUMBO (more info below).

The film, written and directed by Madeleine Olnek, is a lovely, quirky, comic fantasia, with a beautifully understated performance by Lisa Haas as the sweetly codependent lesbian who’s fallen in love with a space alien.  Filmed in a sort of Ed Wood, low-budget camp sci-fi style, Codependent offers a fun queer evening at the movies.

Olnek was a regular at the WOW Café in the 1980s, when the underground lesbian performance space was breaking rules about theatre and poaching from popular culture to rewrite what we understood of gender and sexuality norms.  The film is based on her play of the same title, which will soon be published in a collection of work from WOW that Holly Hughes and Alina Troyano (Carmelita Tropicana) are co-editing for the University of Michigan Press.  Olnek made the play into an indie feature film that’s now making the rounds on the festival circuit.  I caught the showing on the first night of the Galway Film Festival at Town Hall last July.

In true WOW style, the film both quotes and breaks the genre conventions on which it’s based. Jane (Haas) is a desperately shy, lonely lesbian clerk at a greeting card store, who finds a note dropped seemingly out of the blue in which a lesbian space alien asks if they can be friends.  As Jane’s therapist (the wry Rae C. Wright) tries to help Jane puzzle through her emotions while persuading her that she hasn’t really been contacted by aliens, the planet Zots suffers an environmental crisis.  They believe their ozone layer is being destroyed by “big feelings,” and resolve to send to Earth any of their citizens whose love affairs are damaging their planet.  On Earth, the reasoning goes, the aliens’ hearts will be broken, and they’ll return to Zots cured of their commitment to love.

And so begins a tale of aliens-on-another-planet, in which the sexual and cultural mores of Earth clash with the otherworldly style of the citizens of Zots.  Beaming down into Jane’s world, Zoinx (the handsome, square-jawed Susan Ziegler) targets the shy lesbian for her experiment in Earth-bound relationships.  Despite her monotone, high-tech, echoing voice and her utter lack of human affect, Jane finds Zoinx charming.

Part of the film’s joke is that Jane never acknowledges Zoinx’s strangeness, accepting the alien’s bald head, her never-removed large, Elizabethan-style collar, which nearly encircles her starkly prominent pate, and her strange way of expressing affection (she puts her hand against Jane’s nose in an awkward gesture whenever she’s feeling intimate).  Jane is so delighted by Zoinx’s company that she happily engages her alien customs and generously teaches Zoinx the equally strange ways of Earth.

Two other aliens have been sent to Earth to participate in Zots’ project.  Bar (Cynthia Kaplan) and Zylar (Jackie Monahan) have the misfortune of having “big feelings” for one another, but try to find earthlings who might cure them of their mutual affliction.

Olnek includes hilarious scenes in which various local lesbians respond to Zylar’s personal ad (written and videoed), and find themselves incapable of understanding or accepting what looks to them like weird role-playing.  In their one-note delivery, Bar and Zylar’s declarations of desperate love both undercut and underline the typical (or is it stereotypical?) excess of lesbian attachments with truly funny, sweet knowingness.

Two “men in black,” federal agents of some sort who track the aliens’ activity on Earth, shadow Jane and Zoinx, trying to figure out the place from which the aliens enter and leave the country. Their scenes are filmed almost entirely in a parked suburban van, where the senior agent (Dennis Davis) complains that he’s always passed up for promotion, watching those he’s trained leapfrog over him professionally.  His junior partner (Alex Karpovsky) asks him probing questions, inquiring, for instance, whether his wife, Debbie, is a “transman,” to the guy’s utter perplexity.

The two men’s deadpan humor offers a terrific counterbalance to Jane and the aliens’ shenanigans. Their surveillance activities also allow Olnek to feed them anthropological lines about lesbian relationships, as their ridiculous comments about whether these romances last (for one example) provide both a dominant cultural voice and an eye that lets them peer into the margins with a rather friendly, liberal curiosity.

Davis and Karpovsky play their scenes with a lovely improvisational tone and Davis, in particular, comments as much on conventional masculinity as Jane and the aliens comment on lesbian relationships.

Codependent Lesbian Space Alien is filmed with an intentionally low-budget gestalt reminiscent of Ed Woods’ opus and the science fiction movies of the 1950s.  Olnek uses low-tech special effects to represent the aliens’ space ship, and the film’s black and white stock lets her use fun ‘50s-style titles and images of galaxies swirling in space.

The music, too, quotes ‘50s melodramatic film conventions to over-emphasize emotions and to help announce Olnek’s affectionate parodies not only of sci-fi but of stereotypes of contemporary lesbian relationships.

Watching actors dressed as aliens walking robotically through real New York East and West Village locations while no one on the streets blinks an eye is also a hoot.  Codependents ends up being a sweet, funny love story in which two deeply “different” women triumph over their odds.

>At a public discussion after the showing in Galway, Olnek described how she researched the genre and understands its roots in Cold War paranoia.  Aliens, she pointed out, where often portrayed as they are in her film (that is, bald and homogeneous in appearance) to represent Americans’ fear of the uniformity a Soviet take-over might impose.  Likewise, Olnek suggested, their monotone speaking voices borrow from those ‘50s sci-fi movies, in which the aliens’ voices, too, were leeched of individual character and affect.

Putting these characteristics in a lesbian context, however, makes them sweet and hilarious.  Jane takes Zoinx out for a drink at the Cubbyhole, a lesbian bar in Greenwich Village, where Jane whispers that the clientele tends to be unfriendly.  When Zoinx asks Jane to dance, she happily complies, trying to turn her embarrassment into a kind of pride when Zoinx’s moves prove anything but conventional.  The reaction shots are hysterical.