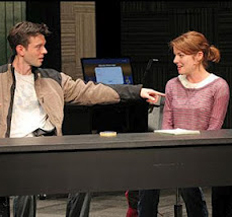 Seeing these two plays back to back made me think a lot about content and style in realist dramas. Both Itamar Moses’s Completeness and Richard Nelson’s Sweet and Sad concern relationships, in more or less domestic settings.  Completeness is about young people, just starting out in their lives;Sweet and Sad is about a middle-aged family whose lives have been rocked in different ways by loss.  Both dramas are structured around story-telling and long monologues to which other characters listen carefully; neither are plot-driven or full of action or even conflict.  And yet Sweet and Sad ends by being about so much more than it appears to be, while Completeness, though in its own way sweet and sad, winds up being about so much less.

The Moses play, at Playwrights Horizons, fits nicely into the theatre’s menu of beautifully presented, consistently satisfying work by “new” (usually young) playwrights.  With simple but elegant productions, lovely, subtle direction, and top-notch acting, I’m rarely disappointed by what I see at Playwrights.  But Completeness made me think a bit harder about what exactly this bill of fare delivers.

The four-hander concerns graduate students in computer science and molecular biology making their way into new thought in their respective fields.  Elliot (the baggy-eyed, appealing Karl Miller) is working hard on an algorithm that will break a long-vexed problem of predictive data management in computer science, but in his spare time, he’s breaking up with his girlfriend, a colleague in his department, to pursue a new attraction to Molly (Aubrey Dollar), a graduate student working on yeast cultures and cell division in molecular biology.  Elliot and Molly’s various former partners and co-workers move in and out of their lives, as the couple dance around one another, too entangled in their own emotional histories to really make a commitment.

Thanks to Miller and Dollar (lovely and intelligent as Molly) and to director Pam MacKinnon’s unobtrusive but sensitive guidance, Completeness makes a compelling case for its characters.  They speak often about their work, in long paragraphs that delve into some detail about their various hypotheses and experiments.  That these speeches remain interesting, despite the often technical jargon of their fields, is a credit to Miller and Dollar, who makes us see their ideas as living, breathing problems that they’re eager to address and solve.  The actors make Elliot and Molly dreamy with ambition, so that their overlapping investigations and their collaboration in science and math become as sexy and poetic as their romantic moments.  In fact, their intellectual exchanges sometimes make for more compelling conversation, since Moses delivers through metaphor the emotional challenges they face as a couple.  Molly insists she needs to do more “screens” to prove her ideas; Elliot keeps hitting walls because the choices his algorithm addresses increase exponentially with each new addition.

That they’re really talking about their emotional lives is both elegant writing and somehow a slightly disappointing bait and switch.  I enjoy listening to smart characters on stage (especially women, who are still too rarely given the dignity of real work to address as part of their action). Elliot and Molly think together in ways that become as attractive to spectators as it does to them. But once their relationship starts, after a fast sexual encounter that they mutually manipulate into happening, Completeness too quickly devolves into a play that’s about the callow emotions of twenty-somethings, instead of about the excitement of the science at which they work.

Moses carefully structures their revelations.  After they grudgingly admit that their relationship might have a future, both Elliot and Molly feel compelled to confess their flaws.  Elliot tends to run from his feelings, once the initial excitement of the chase has ended.  His speech about wanting to preserve the wonder and mystery of that first flush of love for his new object of affection is beautifully crafted and clear.  Likewise, Molly meets his acknowledgement with one of her own, relating obliquely that she broke another man’s heart and in the process, broke her own, in a failed partnership that continues to haunt her.  She bemoans her inability to be a “clean slate.”

But why should this be Molly’s hubris and not everyone’s?  Who is a clean slate, once they’ve reached their mid-twenties?  Those two lynchpin speeches, then, provide an unfortunately misguided emotional turning point for Elliot and Molly.  While Completeness is notable for the emotional openness and eloquence of its male as well as its female characters, these speeches retreat back into typical gendered norms:  Elliot prefers the chase and Molly has baggage.  Even the play’s rather oblique ending, which offers Elliot the chance to act against masculine type, remains tentative, leaving us with the sense that while there’s hope, neither character has enough real gumption to break their already established emotional patterns.

So what’s it all about, then?  Molly says their whole generation is damaged, unable to complete the pass of real relationships.  The stakes seem too high, yet at the same time, in the play’s story, they’re also too amorphous.  What do either Elliot or Molly really have to lose?  They’re both well situated, with funding for their research, despite Molly’s earlier sexual relationship with her advisor, who proceeds to try to blackmail her professionally.  (Happily, Moses lets Molly stand up to this creep; she’s clearly a woman with professional courage and clarity.)

These aren’t characters in danger.  Elliot works with an undergraduate woman (Meredith Forlenza, excellent and distinct in each of her three subsidiary roles) who’d be happy to start a relationship with him, and Molly’s fellow grad student, Franklin (Brian Avers, also energetic and amusing in his multiple roles), doesn’t hesitate to kiss her as they work together, after offering what he admits is too much information about his own emotional traumas.  (Moses’s men are supposed to be as vulnerable as his women.)  Elliot and Molly will be fine; the play shows us that at every turn.  Why, then, should we care about whether or not they choose to be fine together?

Sweet and Sad, on the other hand, concerns a middle-aged family of brothers and sisters, their partners, and an elderly uncle trying to live within their long-standing emotional entanglements against the backdrop of the national cataclysm that was 9/11.  Nelson is specific about when and where the family’s conversations unfold; the program notes that the play “takes place between approximately 2pm and 4pm on the afternoon of Sunday, September 11, 2011” in the “dining room in Barbara and Marian Apple’s house on Center Street” in Rhinebeck, New York.  Through this specificity comes a grounded sense of place and time, in which the characters spin out not just their familial and emotional ties, but their private sense of how their own traumas and histories fit into the memory and present of the more public trauma of 9/11. 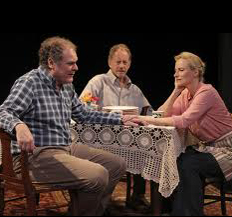 Nelson directed his own script for this Public Theatre PublicLab production, a sequel to That Hopey Changey Thing, which opened on election night, November 2, 2010.  I didn’t see the first installment in what Nelson promises is a series, which I regret, having found Sweet and Sad a lovely, important example of how theatre can participate in public dialogue.  Although it might be called intense realism, conducted as it is through quotidian conversations, in one set, against the backdrop of a family meal in preparation for an evening out, Sweet and Sad speaks so resonantly into a notable public moment (the 10th anniversary of 9/11) that it seems almost Brechtian in its appeal to a thinking spectator caught in the inevitable changes wrought by history.

Nelson addresses private and public loss.  Marian (Laila Robins) has moved back into the family home with her sister, Barbara (Maryann Plunkett).  Both are public school teachers.  But Marian’s daughter has recently committed suicide, for reasons Nelson doesn’t clarify.  The motivation for the young woman’s death isn’t as important as the effects of her loss on Barbara and the rest of the family.  Barbara tries to soldier on in her life, but her spirit is broken.  When she disappears from the family dining table, overcome by grief, her family whispers about how they might help her.  Her mourning is a problem, in a Brechtian lehrstuck sort of way—how might we address socially what seems only private?

Analogous to Barbara’s mourning is the national grief recalled by the 10th anniversary of 9/11. Around these two parallel griefs, the family talks about their lives and their choices.  Richard (the compassionate, articulate Jay O. Sanders, whose acting makes subtle nuances in a character who could be boorish and unlikable) is a wealthy Manhattan lawyer; his third sister, Jane (J. Smith-Cameron, lovely in the role of a woman who’s arch and competitive but continues to grapple with her own personal and public sensitivities), is a journalist who’s seeing an actor, reviving a long-standing but fallow relationship after she divorces her husband.

The Apple family, that is, are adults—successful (for the most part), white, middle-class adults, which makes them representative of only a small part of New York society.  But nonetheless, Nelson makes of their conversation a smart and compelling meditation on how we lead our lives and how we make our choices, the consequences of personal gestures in the context of a public still roiled by a sense of its own vulnerability and connection to world forces much, much larger than the very tiny units of family and work in which our lives play out.