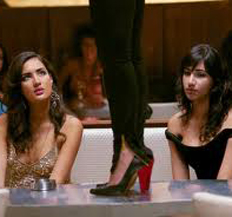 The film’s opening scene sets the tone, as Atafeh (Nikohl Boosheri) and Shireen (Sarah Kazemy) stand among their young peers in a school yard, all wearing identical, modesty-imposing skirts and jackets and hijabs that barely hide the two women’s beauty. Shireen slips an origami bird into Atafeh’s hand, a gesture of fondness weighted with the symbolism of impossible flight and escape that comes to define the girls’ relationship and their lives.

Although Circumstance follows the young women’s sexual and emotional relationship in the context of the Iranian theocracy, the film more broadly addresses the country’s human rights violations against women. A pervasive sense of surveillance quickly becomes the film’s visual motif. In that first schoolyard scene, after the headmistress dismisses the girls, we see Atafeh and Shireen hail a taxi to leave the school grounds. Keshavarz shoots the action from above in grainy black and white, as if through the lens of a security camera.

The image conveys the intrusive intimacy of being so closely watched. These images appear regularly throughout the story, reminding spectators of the omnipresent eye of the religious authorities whose word holds sway, even as the two young women seem blissfully unaware of how their every move is observed and catalogued.

Ata’s brother, Mehran (Reza Sixo Safai), serves as the family’s in-house surveyor. He returns to the family fold at the film’s start, after an unexplained absence. Mehran was a talented musician who’s given up his gift after recovering from a devastating drug addiction that’s left his father suspicious and his mother forgiving. Mehran replaces his passion for music and drugs with religious fanaticism, surprising his wealthy, secular family with his new commitment to prayer.

Mehran becomes the vehicle through which Iranian theocracy infiltrates the micro-level of the family unit. His post-addiction paranoia translates into obsessive spying on his sister and the rest of his family. His eye supplements the state’s, as he installs cameras around his family’s home through which he observes their every interaction.

He also collaborates with the mullahs who become his new compatriots. When he begins to understand the physical and emotional reality of Ata and Shireen’s relationship, he engineers a series of confrontations in which the morality police round up and harass the two girls. Mehran comes to Shireen’s rescue in a way that forces her to depend on his manufactured generosity and allows him to manipulate her into an unwanted marriage.

While Ata’s family is well-off and initially protected from the authoritative whims of the local mullahs, Shireen’s parents were professors executed as counter-revolutionaries by the theocratic regime. The beautiful, doleful young woman lives with her uncle and her grandmother, tenuously attached to the relatives who tolerate the economic burden of her presence. Her grandmother adores her; a scene in which they dance together in the kitchen with a kind of joyous freedom is lovely, and contrasts sharply with those of her uncle trying to palm her off on another man by arranging a marriage before Mehran steps in to offer himself.

When Ata and Shireen are arrested on a fabricated morality charge, the cruel officials accuse Shireen of being a whore. They belittle her and threaten to hang her, just as the state hanged her parents. Ata is fierce on her friend’s behalf, and saved by the sage generosity of her own father, who bails her out by bribing the unctuous, dangerous mullah. But Shireen knows how limited her options are without money or a father to rescue her, and becomes trapped by the impossibility of truly being free as a woman in a deeply patriarchal, religiously driven social order.

Because Shireen’s lineage already puts her at a political disadvantage, Keshavarz establishes visually how the male-embodied state holds power over her very flesh. When Shireen takes a taxi from a party alone, the driver abuses her sexually, using her for his fetishistic pleasures.

Keshavarz directs her two, fresh leading actors with subtly and respect. Boosheri and Kazemy are lovely together as Ata and Shireen, communicating the stark contrast between what their newly matured bodies want and what their deeply constrictive public culture allows. They convey their love for one another with small gestures that Keshavarz captures with simple delicacy—one girl’s finger curling around the other’s as they stand in line at school or as they walk together with the men who comprise their social lives; the quick kiss Shireen gives Ata when she breaks a car window to steal a shimmering handbag she admires; and especially in the way the girls dance together, alone in Ata’s room, before Mehran intrudes on their pleasure. Their physical freedom, and the obvious eroticism of their bond as they dance together with delight while they watch “American Idol,” is at once moving and wrenching. 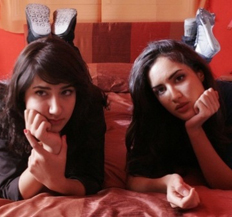 Ata and Shireen’s palpable attraction to one another provokes anxiety in the film’s spectators, if not in the other characters, about their fates. But although Keshavarz keeps the threat of danger flickering around the film, only the scenes with the mullah and Mehran actualize the dire circumstances in which the women live. Still, their lives are a series of close calls, each of which underlines the cost of female resistance and the gender hypocrisy of Iranian culture.

For example, Ata and Shireen frequent parties in Teheran’s underground, where young people dance to Western music, drink, do drugs, and experiment with sex in ways Keshavarz depicts as normal for 21st century young people. But these rites of passage are consigned to private homes, which Ata and Shireen enter by pretending they’re going to sewing circles. Their male friends, on the other hand, can range freely through Iranian society, without the sartorial or behavioral constraints that confine the young women.

Keshavarz also complicates the film’s gender politics by making Ata and Shireen’s male intimates rather harmless, suggesting that they are constructed into the gendered power of the state, rather than naturally assuming it. Ata’s ostensible boyfriend at first seems threatening. When he tries to have sex with Shireen—who soundly rejects him—he seems fully in command of his sexual power. But he turns out to be innocuous and young.

He and Ata team up with Shireen and Joey (Keon Mohajeri), a young man who’s gone to school in the U.S. and has progressive ideas about ideology and politics. Joey idealistically dreams of dubbing Milk, the American biopic, into Arabic, so that Iranians—he believes—will be able to see their own situation in the story of gay liberation in America. He wants his people to be inspired to change what he, speaking the film’s title, points to as their dubious circumstances.

Some of the film’s lightest moments show the four friends trying to speak like Sean Penn as Harvey Milk, or to simulate the film’s gay sex with the right tone of voice.  Joey’s faith that his work will mean something is touching even though the film clarifies that it’s also naïve and finally, in the end, fatal.

Circumstance is at its best when Keshavarz more indirectly shows the oppressions of a culture in which binary gender distinctions are so determining.  When Ata and Shireen join Ata’s family for a day at the beach, the director stages in the background another family lounging beside their beach blanket, the mother in full black dress and hijab while her sons and husband wear revealing swim suits.  Ata’s father, Firouz (Soheil Parsa), and Mehran also enjoy the privilege to inhabit their bodies publically, leaving their own women behind with only a small backward glance before they run into the waves.

Later, when Ata and Shireen find themselves alone by the water as the men are called to prayer, they take advantage of their exclusion from religious ritual to strip to their underwear and swim together.  The actors perfectly perform the sensual thrill of floating in your own skin along the surface of the water with someone you love.

Even Ata’s mother, Azar (Nasrin Pakkho), is complicit in her refusal to see anything but what makes her life livable.  She’s glad for her son’s return and unwilling to acknowledge the authoritarian religious current he brings into her house.  Given Azar’s lack of power, the film suggests she can do little but use her intentional blindness to help her survive.

Only Ata, in the end, finds her circumstances untenable.  She sees that her liberal father will inevitably have to acquiesce to the mullahs to retain his economic, if not political, privilege. She notes with horror as her father begins to join Mehran’s religious observances.

Ata understands her world will constrict even further unless she escapes while she can.  Following a dream that Shireen first articulated—and unsuccessfully begging her friend to come along—Ata bribes an official to let her travel to Dubai without her father’s permission, freeing herself into a life she imagines will allow her to embody freely the woman she has become.

Circumstance’s ending sounds a few false notes.  Perhaps Shireen’s fear of being hanged by the police is finally enough to force her to capitulate to husband, but in her final scene, it seems she has also, inexplicably, developed some feeling for him.  And occasionally, Keshavarz paints the mullahs and their henchmen as two-dimensional villains, when the subtlety of their evil is much more chilling.

Nonetheless, with its artful yet stark eroticism bumping up against scenes that reveal the unadulterated cruelty of an oppressive social system, the film is a powerful indictment of the disempowerment of Iranian women.  Circumstance provides a stirring, important picture of the crushing double standard between what women desire in private and what they’re allowed in public.