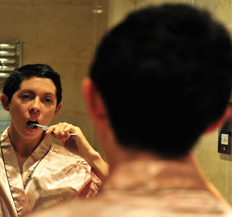 The Galway Arts Festival opened last Monday, July 11, promising an impressive range of Irish and global theatre and performance opportunities through July 24. My own consumption of the daily events and productions began with a site-specific production of Franz Xavier Kroetz’s Request Programme. First produced in Stuttgart in 1973, the play is a silent meditation/lamentation, a slice of life at the end of a day in one ordinary woman’s life.

I saw the play (then called Request Concert) produced in New York in the early 1980s, with a stunning performance by Joan Mackintosh. That production, however, was played on a proscenium stage, into which the audience peered like voyeurs as this unnamed, unknown woman performed the mundane actions of her typical evening. She returned from work; settled in; washed her face; cooked her meal; and prepared for bed.

We know nothing about her or her circumstances. The slow unraveling of her control over her emotions and her final cataclysmic action comes without an explanatory backstory. The play’s silence—there is no dialogue—keeps the woman’s interior life remote and mysterious. The intimacy of her quotidian activities makes spectators question what it means to watch the progress of someone else’s life.

In a site-specific production like this one, skillfully mounted by Corcadorca Theatre Company’s founder and artistic director Pat Kiernan in an elegant Galway apartment just off of the central Eyre Square, the audience’s voyeurism is both invited and heightened. Ushered to the two-bedroom, two-bath residence 15 minutes prior to the performance’s official start time, we were given a sheet of instructions that encouraged us to roam through the apartment and look at things at our leisure. Nothing was off-limits—we could open drawers, cabinets, the refrigerator, and examine books and personal effects at will.

Watching fellow spectators navigate this invitation indicated how comfortable we all are with interpersonal boundaries. Some folks the evening I attended opened dresser drawers and closets and sifted through toiletries; others stood in the center of the living room, peering about but forgoing the invitation to touch. We were told that keeping silent was the one unbreakable rule, and that the actor/character (the superb Eileen Walsh) would not acknowledge our presence.

Request Programme requires diligent investigation and observation to put together the narrative cues that pepper the scene and the woman’s actions. Who she is, what she cares about, where she’s been, and where’s she’s going is ambiguous. Looking at her bookcases ahead of time, for instance, I noted a number of contemporary novels written by women and a few “self-help” titles. On her bedside table lay David Nicholl’s recent novel One Day, with a bookmark half-way through. Beside it, the most recent Vanity Fair was open to a story called “Betting the Farm,” which addresses property rights in the Hamptons, in the States.

But the article’s title and the subject of Nicholl’s book offer clues, of a sort, to where this woman might be headed. One Day details the same date over twenty years in the lives of two characters whose relationship is stormy, vexed, passionate, and ultimately, tragically, failed. And although the woman in Request Programme might have nothing to do with the Hampton’s proper, to “bet the farm” colloquially means to risk everything you have on one thing. (To “buy the farm,” on the other hand, means to die.)

Whether or not you read these clues (and whether or not they really are clues), closely observing the woman’s behavior hints at her increasing despair and desperation. When she arrives, her keys engage the lock and we hear her heels clicking into the narrow front hallway. She’s wearing a white and beige linen suit, and a lanyard around her neck from which a corporate identification tag hangs. She comes into the living room/kitchen to start her tea boiling, then moves into her bedroom, where most of the audience follows, watching her change into casual linen pants and a pilled grey wool sweater to begin her evening rituals.

The first half of the performance details her close control over her environment. Before she changes out of her work clothes, she opens the apartment’s windows, pausing for a moment to stare out pensively. She finds a dead fly on a window sill, and takes a relatively large amount of time to pick up its carcass with a tissue; throw it in the garbage, her nose wrinkled with distaste; and spray the sill with disinfectant, furiously wiping it down after.

This obsessive cleanliness continues throughout her routine. She washes her dishes three or four times over the course of the performance, then spraying the sink with cleaning solution and rigorously wiping it out. But each time she does so is a bit different. By the last time, she’s not quite as precise or careful.

Likewise, when she sets the table for her dinner, she carefully lines up every kitchen implement she’ll need to cut her paté and organize her bottled red peppers, which she arranges on her plate like a still life—garnished with parsley from a pot above her range—that she proceeds to eat methodically, careful not to soil the picture with crumbs.

Later, she pours herself a second cup of tea and eats from a packet of digestive biscuits, flicking them out of the cellophane one at a time, dunking the cookie into her tea, and putting the whole thing hastily in her mouth to avoid getting crumbs on the quilting project she’s chosen for her night’s activity.

Watching the woman’s compulsive behavior gradually and subtly fall apart over the course of the 75 minute performance points to how her evening (and ours) eventually ends. Her demeanor, too, begins to crack. Early on, she peers into a mirror in the living room, running a finger over a spot on her face and applying some sort of salve, clearly unhappy and preoccupied with this evidence of imperfection on her person.

When she uses the toilet (in full view of the roaming spectators, twice), she winces. I happened to notice a box of tablets to treat cystitis in one of her kitchen cabinets on my own rifling through her personal effects before the performance. This, along with her pain and the glass of diluted cranberry juice she drinks at one point in the performance, indicates an ordinary and annoying urinary tract infection. But because nothing is told to the spectators, you’re required to assemble the evidence and come to your own conclusions.

Request Programme happens in real time. She turns on the television after she changes her clothes, and watches a Sky News story about Rupert Murdoch’s media corporation’s phone-hacking scandal in the UK. Clearly, the television broadcast is “real.” Later, as she’s sewing a piece onto a quilt she intends to use to cover her coffee table, she listens to the radio, accessed as part of a combo CD/FM player on her bookcase.

The songs that we heard played that night seemed so thematically relevant to her situation—or at least its emotional valence—that the radio broadcast seemed to be a tape collated specifically for the performance. We heard songs by Van Morrison, Tracy Chapman, and other mournful ballads about love lost play over the air, all of which seem related to this woman’s deep sadness. But because the whole performance seems to take place in “reality,” the radio program’s status as fact or fiction wasn’t certain. (In a discussion with director Kiernan two days after the performance I saw, Walsh referred to the radio broadcast as in fact happening in real time.)

Kroetz’s play ends with the woman’s suicide, a choice her evening’s activities, in retrospect, seem to lead toward throughout. We return with her to her bedroom—spectators crowded around the periphery of the small room, no more than two feet or so from Walsh—and watch as she undresses, uses the attached bathroom, climbs into bed, turns out the light (which plunges us all into shared darkness), and then proceeds to sob. (A number of spectators moved to leave when she turned out the light; they were caught short by her unexpected crying.)

She returns to the kitchen, where she takes out a bottle of what I assumed were prescription sleeping pills. First she takes one, but as she turns the bottle over in her hands, we see her make another decision. She pours all the pills out, arranging them in pairs on a clean plate like a final still life, as orderly as ever, even as she moves toward taking her own life, and begins to swallow them down with gulps of water.

Halfway through, she takes a half-bottle of champagne from the refrigerator and pours it into her glass to chase the rest of the pills. The champagne bubbles over the top of the glass onto the table. She doesn’t wipe it up. And as the sleeve of her dressing gown trails into the wine and she doesn’t react to what 30 minutes ago she would have considered a desecration of her methodical rituals, we know she’s done for.

In one final moment, as the plate is cleared of pills, Walsh suddenly looks up from her sorrowful task, and takes a moment to make clear eye contact sequentially with every spectator in the room. Holding her gaze for that moment is devastating. What is she asking of us, in this final bit of intersubjectivity? Is she blaming us for not taking responsibility for stopping her suicide? Is her surprisingly intense, fiery peering into our eyes meant to accuse us as fellow travelers who didn’t care enough to step in? Or is she simply acknowledging our presence, after these 75 minutes? Is this the character, or Walsh, looking at us so urgently? Was she perhaps just saying goodbye?

I was very moved by this moment, as it highlighted what I’d felt as a connection to Walsh and to my fellow spectators as we made our way through this moment of a life together. The performance requires a bit of endurance; that is, the apartment gets stuffy and close as we stand, jockeying for position to see Walsh’s actions but also moving out of her way when necessary.

And the intimacy of the evening is unusual; we’re not accustomed to being that close to a performer, or to being able to see one another so clearly as we comprise an audience. That we can look wherever we wish throughout the performance means that we see one another, as well as Walsh. As a result, I was aware of how I directed my gaze, and felt clear responsibility for where and when I moved and looked.

Because the woman is anonymous, you’re invited to project yourself into her actions and her final choice. The heartbreak of Request Programme isn’t necessarily that we mourn this particular woman’s decision to end her life; we don’t know her. And there’s nothing particularly desperate about her circumstances; even her casual clothes are elegant, and her apartment and its fixtures are tastefully high-end. It’s not economic despair that moves her to take her life. But perhaps we mourn the deadening rituals and routines of our own lives, however comfortable they are or aren’t, and consider how easy it would be for us, too, to slip from motivation to despair.

In another artists’ discussion at the festival, playwright Enda Walsh, who worked with Eileen Walsh and Pat Kiernan as part of Corcadorca in the mid-90s, said that his own plays are all about his wonder at how it is that we survive at all, how we move through each day determined to keep living. Request Programme offers the grim flipside, when that determination ends and someone decides to simply stop.

Witnessing a character make that choice, in a performance in which you make your own choices about where, when, and how to position yourself around her, makes the project of survival poignant indeed.