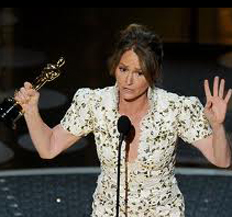 Every year, I settle in to watch the Academy Awards show, and every year, I come away disappointed. Last night’s show promised something a little different—young co-hosts Anne Hathaway and James Franco were supposed to bring verve and energy to a show that continually runs out of steam well before the finish line. If it’s not going to be distinguished and elegant, amidst jokes at industry-insiders’ expense (which a short clip shown last night of Bob Hope hosting, decades ago, evinced), then it should at least move quickly through the night’s requisites, handing out the awards with a minimum of fuss and bother.

Neither elegant nor bother-free, the 2011 awards ceremony telecast seemed instead particularly forced and wooden. Franco and Hathaway are terrific actors (he was nominated this year as Best Actor for 127 Hours); the opening gambit filmed the two moving Inception-style through Alec Baldwin’s dreams as a way to introduce the 10 films nominated for Best Picture awards. Franco and Hathaway rose to the occasion of this minor comedy, gamely playing for laughs.

But once they appeared live at the Kodak Theatre, their patter seemed unusually dull and plastic.Franco stood with his hands crossed below his waist for most of the night, his brow frowning, and his eyes squinted, as though, looking out at the over-dressed audience, he wondered what in the world he’d gotten himself into.

Hathaway was adorable and earnest, but worked almost too hard to maintain the youthful energy the show’s producers desperately courted. Her sycophantic hosannas to various colleagues—her personal “moment” introducing Sandra Bullock, her infatuated announcement of Stephen Spielberg’s appearance—seemed to brook the unspoken decorum of the event, in which only the audience at home is supposed to be impressed by celebrity. Everyone on stage is meant to take stardom in stride. Something about Hathaway’s fawning—or the writers’ and producers’ choice to have her do so—seemed pushed, false, and wrong.

Trotting 90+-year-old Kirk Douglas out to announce the Best Supporting Actress award first thing in the evening proved a torturous exercise for the nominated performers and for the audience. The once-glamorous movie star now uses a cane, and a stroke distorted his face and his speech. But the guy still loves the limelight. He milked lousy jokes that had him flirting shamelessly with the five women nominees like an old satyric goat.

Even once he opened the envelope to announce the winner, Douglas interrupted himself twice to extend the suspense and his own moment in the spotlight. An Oscar handler finally had to pull the guy from view. When Melissa Leo won the award (for The Fighter), their cringe-worthy mugging provoked only embarrassment. As they walked off together, she took his cane and pretended to hobble along beside him.

Leo’s fabricated surprise and wonder at her win was as unseemly as Douglas’s lecherous antics, given that everyone watching knew that she had taken out “for your consideration” ads on her own behalf in the trade press. For an actor who does smart work in film (Frozen River, as well as The Fighter) and television (Homicide: Life on the Streets), Leo’s silly acceptance speech proved disappointing. The post-ceremony press makes much of her “dropping the F-bomb,” a curse that was instantly censored by the broadcast’s five-second delay. But aside from the indecorous swear word, she said nothing of substance and appeared lightweight and insincere.

In fact, most of the acceptance speeches fell short of an already low standard. I wondered as I do most years by midnight of the awards ceremony telecast why in the world I continue watching. It occurred to me that seeing people accept their awards on live tv offers the possibility for spontaneity and insight. I always hope someone will use their momentary platform to say something important to the millions of people watching and listening. That so few of these powerful stars take advantage of their time on stage seems shameful.

Only Charles Ferguson, who won the Best Documentary award for Inside Job, a film about the Wall Street scandal, used his speech incisively. He castigated the government for bringing to justice not one of the corporate executives who perpetrated the financial fraud. A few award winners referred obliquely to their support for the industry’s unions, gesturing to the current anti-union government activism in Wisconsin and elsewhere.

But even the politically-minded screenwriter Aaron Sorkin restrained himself when he accepted his award for adapting The Social Network. A few winners nodded to same-sex partners. The one female and two male sound editors who jointly won for their work on Inception thanked their “three wives,” and one of the producers of The King’s Speech thanked his boyfriend.

These were welcome alternatives, given the night-long litany of people thanking opposite-sex husbands, wives, and children. Why in the world do we need to hear these personal acknowledgements? Or even, for that matter, the long lists of “teams” who promote these people to their colleagues and peers? Those moments reek of personal and professional self-congratulatory normativity.

Colin Firth (Best Actor for The King’s Speech) and Natalie Portman (Best Actress for The Black Swan) came away with more of their dignity intact, simply because they seem more innately intelligent than some of their fellow celebrities, and offered more circumspect and apparently heart-felt (even humble) remarks.

No surprises pumped adrenaline into the evening. In fact, the show moved sluggishly and became boring only a few commercial breaks into the night. Even the visuals were cheesy. The stage was dressed like some sort of space capsule, with the presenters on its wide outer edges and film clips projected far upstage in its nose. The downstage apron where stars presented and accepted the awards looked like the floor of a pinball machine, bedecked in meaningless, distracting silver patterns.

Lighting in a strangely red, yellow, and orange color palette flattered no one, which only underlined how uncomfortable everyone onstage looked. The weird camera angles the producers chose during the acceptance speeches presented the winners in profile and sometimes from behind, which did nothing to add visual pizazz or appeal to the screen.

Perhaps most outrageous was the near total absence of people of color presenting and accepting awards. Halle Berry offered a special memorial to Lena Horne, and Jennifer Hudson, looking svelte but inexplicably startled, presented the Best Song award. Morgan Freeman appeared in the Franco-Hathaway opening film number. But that was pretty much it for people of color throughout the evening.

The evening’s representation of gender wasn’t much better. Douglas was allowed to cavort unimpeded while the frustrated Best Supporting Actress nominees were supposed to act charmed by his narcissism. Instead, the moment diminished the importance of their work. Annette Bening, a woman in her 50s who’s made a career of terrific, thoughtfully crafted character parts, lost to a woman who’s not yet 30. Portman is also a wonderful actress, but the histrionics of her role in The Black Swan were in a different register than Bening’s careful, nuanced, mutable reactions as a lesbian cuckolded when her long-term partner has sex with their children’s sperm donor.

Portman’s intensive dance training and her resulting loss of body fat, coupled with a role that required her character to mutilate herself and go insane insured that the young woman was directed to be and to play spectacle. Bening played heart, mind, and soul. But when it comes to women, spectacle always seems to win.

At the evening’s end, after the predictable Best Picture win for The King’s Speech, a chorus of fifth graders from a public school in Staten Island swarmed the stage to sing “Somewhere Over the Rainbow.” The multi-racial kids were cute and lively, and even as they over-acted out the song’s words, they struck a sincere, happy note in the telecast’s final moments. Maybe they should do the whole show next year.