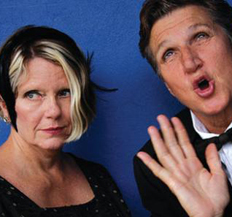 This elegiac evening with Peggy Shaw, Lois Weaver, and musician Vivian Stoll is a beautiful meditation on change, loss, and aging, delivered as a Sid Caesar/Imogene Coco-or Mike Nichols/Elaine May- style lounge act with post-modern stylings. In Dixon Place’s expansive basement black-box theatre—excavated, as Shaw and Weaver imagine, from three stories of layered dirt—the inimitable lesbian pair and their musical partner trade songs and repartee against a visual and sonic backdrop of the city being demolished and (presumably) reconstructed in unrecognizable ways. The images never picture the new; they only show us the wreckage, through an aperture that expands as the evening progresses. Lost Lounge testifies to the past, keeping its view of the present and the future only rueful.

The show is melancholic, the laughs wistful and poignant. Seeing the performance just a day or two after the death of Ellen Stewart, the doyenne of New York’s downtown theatre scene, made the performance even more of a testimony to time’s passing, an even more nostalgic, slightly doleful examination of life’s fleeting.

Before the show begins, as the audience waits upstairs in Dixon Place’s own small lounge, Shaw mingles, asking people what they miss about New York (be it a person or a building) and taking notes on small pieces of square white paper. Dressed formally in a black tux and cumberbund, with a lively black and white bow tie topping her on-going illusion of gentlemanliness, Shaw is a woman with a mission—she chats, but she’s collecting impressions, ideas, words, names. When the audience descends to the theatre, Shaw accompanies us.

Weaver is pre-set, sitting on a black wooden stool and slumped against the black wire bar that’s the evening’s only set piece. Weaver wears a wide black-and-white horizontally striped dress adorned with excessive petticoats, a black velvet bodice, and a décolletage deep enough to store some of her (and our) secrets.

Stoll, too, is already present, standing sentinel by her electronic keyboard, an unlit cigarette dangling from her lips, white against her purple-black dinner jacket. Throughout the short evening, she plays, sometimes 1950s standards to which Shaw and Weaver sing in off-key, heartfelt renditions, sometimes instrumentals, wistful melodies that set the evening’s scene and its tone.

The “lounge” act provides the evening’s conceit and its structure, while “lost” provides its theme.Shaw and Weaver play—although Lost Lounge is in some ways a “reality” show—an embattled duo who’ve worked together long enough to be able to predict one another’s moves and motives, whose long-term relationship chafes just enough to give their act a testy edge. In fact, when Weaver turns her back, Shaw flicks folded up bits of paper at her, whether to get her attention or to annoy her.

Weaver and Shaw have explored these themes before in their duets as Split Britches (they formed the influential, historic feminist performance troupe with Deb Margolin in the early 80s, and now use the name themselves). Their work together—It’s a Small House and We Live in it Always, for example—often tracks the emotional complications of a once romantic, life-long working relationship.

But the performance of on-stage intimacy takes on new poignancy in Lost Lounge, in part because Shaw and Weaver are now squarely middle-age, and in part because they perform their own longevity and their relationship’s changes against the backdrop of a city transforming in ways they mourn.

The video projections of demolition and deconstruction and the clanging, beeping sounds of jackhammers and dump trucks backing up and moving out also evoke the work that’s been on-going at Ground Zero for the last 10 years. But it also recalls the rest of downtown Manhattan and its many, if less cataclysmic, losses. When, at the show’s end, the performers read the slips of paper Shaw collected from us in the lobby, describing what and who we miss, we hear people refer to restaurants and other neighborhood locales that no longer exist, as well as people (more than one referred to Stewart’s death).

Weaver expresses her own astonishment at how quickly these changes are wrought. One day, she remarks, the Bowery mainstay Marion’s is there, flourishing, and the next, the neighborhood restaurant is just . . . gone. Spectators hiss at the mention of NYU, whose corporate expansion plans have changed much of the West and East Village into a student dorm.

Lost Lounge mourns these changes, but at the same time, it celebrates what endures. Weaver and Shaw (or their “characters”) might harp at one another, but they’re there, witnessing one another’s solo performance turns and helping one another with grace, respect, and love. One of the evening’s loveliest numbers is meant to be funny—and generates a few laughs and no doubt a lot of smiles—but it’s also deeply moving: Shaw and Weaver dance, partnering one another through iconic ballroom dancing poses and moves. But they need assistance to carry it off; instead of accomplishing the bends and lifts and twirls with which a younger couple might display their virtuosity, the ubiquitous black stool is used as an assistive dancing device for those whose bones and muscles and tendons can’t emulate those movements without it.

Weaver lays across the stool as she falls back into Shaw’s arms in a conventional swoon, and rather than lifting Weaver when she leaps, Shaw holds up the stool. Weaver reaches up toward it, representing, rather than executing, the balletic moves of a conventional romantic duet. The partners accomplish the scene with the wink and nod that’s the signature of Lost Lounge, but its elegiac implications are inescapable. These performers are aging women, whose bodies can’t quite realize everything for which their imaginations continue to wish. And yet at the same time, they’re observant, mordant, and smart, prodding us to see what’s lost and what’s gained in the inexorable progress of personal and public history.

Shaw and Weaver have always been very physical performers, actors who devise their own choreography (with help from Stormy Brandenberger) and dialogue, fashioning their numbers from a wish-list of images, ideas, and issues to which their desires lead them. Lost Lounge lets them mash up the crooning melodies of lounge singers (one of their best duets is “Autumn Leaves”) with the direct address of stand-up comics, combined with the feminist insights of the political project that always grounds their work.

Their career-long interventions in conventional gender performance and the signs of sexuality continue to flourish here, as Shaw’s mercurial gentleman courts and cares for Weaver’s femme dynamo. Shaw runs through her quintessential poses, arms up in the air, Richard Nixon-style, pointing and punctuating, fiery and present. Weaver is a solid, dependable presence, hands on her hips around her big hoop skirt, casting her ironic gaze in our direction.

Both performers get down and dirty. Shaw lies on the floor close to the top of the show to listen, she says, to the sounds of the earth, and Weaver falls to the ground later on, her petticoats awry, to deliver a ruminative monologue. They aren’t ginger with themselves—Weaver and Shaw’s whole-hearted physical investment continues to be risky and delightful, a model for how to dispense with fear of foolishness.

These two have always been clowns of a sort, but rather than playing for laughs, they play for insights, creating a community of presumptively like-minded folks. We’re something of a coterie crowd, the audience at this performance, an assumption borne out when Shaw, Weaver, and Stoll read what spectators miss about New York, and the performers, invariably, nod in recognition and agreement. Shaw and Weaver see the world through the unique, productive perspective of people who’ve been around the block and know its history intimately.

A palpable sense of “then and now” infuses Lost Lounge. But Shaw and Weaver don’t intend to chastise those who know the present better than the past, but rather to suggest a kind of costs-benefits analysis of what happens when time passes, when neighborhoods change, when the small get devoured by the large.

Lost Lounge is finally a generous gesture, an opportunity, Weaver tells us, for us to “rest,” since we so rarely get the chance. In fact, the show moves more slowly than much of their other work; several times, a big digital clock is projected on the screen behind the performers, and they stand, silently, while a few minutes tick by in something of a doomsday countdown. Or perhaps it’s just a time-out, a real rest, an opportunity to truly lounge, together, inspired and moved by our favorite lesbian feminist downtown performers, who carry our history and help us imagine our collective future.