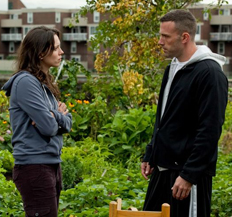 I’m often still surprised by my own gullibility. My faith in performance (and film and television—in representation, really) means that I’m eager to see a broad swath of cultural productions, and that I read, regularly, other critics, amalgamating their comments and making choices about what to see on that basis. The Town, Ben Affleck’s new film, got very good reviews when it opened last month, and although I missed it in the theatres, I watched it last night at home on pay-per-view.

What was I thinking? And how could I forget that most reviewers (sometimes women, included) don’t watch for the things that preoccupy me—representations of gender, sexuality, race, identity, and all the ways that narratives imagine or reconceive of social relationships. So I spent an evening with The Town, waiting for something interesting to happen to one of its two female characters—both adrift in a sea of men—before I realized that of course nothing would happen.

In this familiar male redemption tale, one woman is the whore, damned to remain a loser drug addict languishing forever in Charlestown, where the story is set, and the other is the Madonna, a Yuppie who’s invaded the neighborhood with her social ideals, her sustainable gardening, and her naïve faith in her own ability to make headway among the heathens. Each of them appears in the story for only one reason: to provide foils for the hero, Doug MacRay (Affleck).

Doug is a failed hockey star, drafted by the national league but unable to last because of his hot temper. He returns to his incestuous Charlestown neighborhood, where he takes up with the band of armed robbers who have been his life-long friends and street mates. Jem (Jeremy Renner) is his best friend, an unreconstructed hellion who despite spending nine years in prison, returns to the life of crime that’s the only one he knows. Jem is also a stock character; he’s the guy who can’t see another future than the doomed trajectory on which he’s been set since his birth.

Doug, on the other hand, left the ‘nabe long enough to see something different on the other side of the highly symbolic bridge that connects Charlestown to Boston. He’s sobered up by the time The Town begins, and although he’s still willing to have quick sex with Jem’s sister, Krista (Blake Lively), whose child might or might not be his, her addition to Oxycodone, cocaine, and alcohol is now despicable to him, the repulsive habits of a life he longs to escape.

In the film’s opening scene, Doug, Jem, and the pair of subsidiary slobs who comprise their merry band rob a bank. The sequence is full of gratuitous violence, with an inexplicable cameo by Victor Garber as the bank manager whom Jem brutally, needlessly beats. The assistant manager, Claire (Rebecca Hall), is enlisted to open the bank’s vault, then kidnapped to provide the robbers some measure of safety (I guess, it’s not clear and mostly serves only as a story device) as they escape.They leave Claire, blindfolded, at the beach, warning her not to open her eyes until she feels the water lapping at her toes, and threaten her with rape and murder if she identifies them to the cops.

The FBI is on to these guys, and scoop Claire up for questioning. Jon Hamm plays the crusading G-man, Special Agent Frawley, who’s determined to track down Doug and his band. He questions Claire, but she can’t identify anything but the tattoo on Jem’s neck, which she saw as he beat her boss. The FBI warns her to stick around, and then Doug comes by, ostensibly to “take care of” her, since Jem worries that she’ll turn them in. But, surprise of all surprises, Doug falls in love with Claire instead, and keeps his real identity secret.

And so continues the hero’s redemption tale, where the essentially good guy with the tragic back story tries to save himself through the love of a good woman. Doug, it seems, was raised by a criminal long incarcerated (Doug tells Claire that his father—played by Chris Cooper—has moved to the suburbs). He thinks his mother ran out on the two of them, a psychic and emotional wound the screenplay uses to explain Doug’s wild side. When it turns out (spoiler alert, but believe me, this plot point comes as no surprise when it’s revealed in the film) that his mother was intentionally overdosed by the local drug lord, Fergie (Pete Postlethwaite, acting with slimy, placid cruelty), for whom Doug’s band contracts heists, Doug gets his revenge and engineers his escape from the Charlestown life that can only, finally, kill him.

All the conventions of the genre flick by at the appropriate moments. Doug wants out; Jem forces him to do one more heist, robbing an armored car driven by a man the band knows is trigger-happy.The botched robbery lands the four men at the FBI for questioning, prompting Doug to speed up the timetable for his departure and his desire to take Claire along. But Fergie has other plans, insisting that Doug and his men rob Fenway Park or he’ll kill Claire.

Forced to cooperate, Doug and Jem carry out the elaborate plan, which goes awry as they try to escape with the cash. Tipped off by Krista, who’s been scorned by Doug, that the men are planning to rob the park, Frawley and his compatriot, Dino (Titus Welliver of The Good Wife fame), set up an ambush that takes the lives of all but Doug. Dressed as a Boston cop, he watches his friends die one by one then saunters off, avenging his mother’s death by killing Fergie and his henchman, then taking Amtrak to Miami to start his new life.

Claire, the lovely idealistic woman who sees Doug’s goodness clearly, forgives him the lie that brought him into her life. Although she’s under surveillance by the FBI, before Doug leaves, through a kind of lover’s code, Claire indicates that she’ll follow him south when the coast clears. Frawley is frustrated by Doug’s getaway; the film’s funniest line has Frawley reminding Claire that his organization is national. But somehow, Doug escapes and Claire, too, is allowed to resume her life, with the hope of reuniting with her on-the-lam lover ever in the air. The film ends on a shot of Affleck as Doug presumably on the coast of Miami, watching the sun set and waiting for Claire to join him in the new, beach-swept life he’s finally achieved.

Ho hum, is all I can say. How many times does this story have to be told? Reviewers applauded Affleck’s authoritative filmmaking and storytelling; okay, fine, he knows how to shoot a getaway scene, and he builds suspense nicely throughout. But he’s delivered this story before in his debut film, Good Will Hunting, in which he was the character who stayed and Matt Damon the one who drove off to a new life elsewhere. Reviewers admire Affleck for getting under the skin of characters they say he knows so well, the Charlestown Irish who are fiercely loyal to their families and friends, for whom their slice of life off of Boston proper is their eternal territory, for whom marrying your buddies’ sisters and starting the cycle up anew for the next generation is considered enough. Sure, Affleck and Damon themselves made good, and Affleck seems to want to honor the neighborhood he knows so well by paying it continual homage in his films (see also 2007’s Gone Baby Gone).

But really, guys. At the end of 2010, can’t we consider the women in this perennial story as something more than agents of the men’s growth? Does Krista really have to be damned, both by snitching on Doug and Jem to exact her own revenge on Doug’s determination to leave her behind, and by her addiction to narcotics and alcohol? And do the feds really have to take her kid away to make the point? Bad girlfriend, bad mother, Krista doesn’t stand a chance.

But Claire, the pure and stalwart, who’s at first fooled by Doug’s impersonation of an upright citizen, but ultimately forgives him when she learns he’s not, because he so wants to be good—can’t that stereotypical character grow into a woman with a bit of agency? When will this stock character ever stand on her own, outside the choices that the hero makes for her? Hall plays Claire with a bit of gumption—she’s the Yuppie interloper in Charlestown, but she’s fearless, even thinks she can cross “the projects” by herself to get to work. But when she tells Doug that she gets harassed on her way through the area, he and Jem take baseball bats or golf clubs to the projects and beat up a couple of guys in revenge. Claire can’t handle anything herself, because the film is only about Doug’s quest to be good and get out.

What a waste. Affleck seems a smart guy. He’s a good actor (although the Charlestown accents he and Renner, as Jem, milk for all they’re worth sound too thick and fake) and an accomplished director. But why put that talent toward such a tired story? How many more times do we have to see the hero escape his doom on the backs of women, one good, one bad, both ultimately disposal?

It’s getting to be a real snore.

5 thoughts on “The Town”